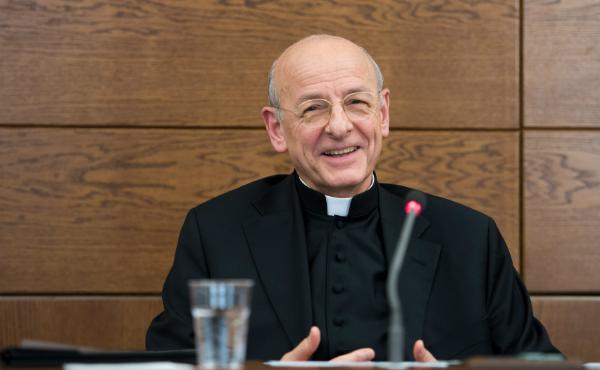 This evening, Pope Francis has named Mgr Fernando Ocáriz Braña prelate of Opus Dei. The Holy Father confirmed the election of the third elective congress of the prelature in the same day.

With this appointment, Monsignor Fernando Ocáriz, who until now has been Auxiliary Vicar of Opus Dei, becomes the third successor of Saint Josemaria at the head of the prelature, following the death of Mgr Javier Echevarría, this past December 12th.

THE HOLY FATHER CONFIRMED THE ELECTION OF THE THIRD ELECTIVE CONGRESS OF THE PRELATURE IN THE SAME DAY.

He is a consultor for the Congregation for the Doctrine of the Faith (since 1986), as well as other departments of the Roman Curia: the Congregation for the Clergy (since 2003) and the Pontifical Council for Promoting the New Evangelization (since 2011). He has been a member of the Pontifical Theological Academy since 1989. In the 1980’s, he was among the professors who began the Pontifical University of the Holy Cross (Rome), where he was a tenured professor (now emeritus) in Fundamental Theology.

Among his theological publications, his books on Christology are especially noteworthy, like The Mystery of Jesus Christ: a Christology and Soteriology Textbook and Hijos de Dios en Cristo. Introducción a una teología de la participación sobrenatural. His publications have dealt largely with theological and philosophical themes, like Amar con obras: a Dios y a los hombres and Naturaleza, gracia y gloria, with a preface by Cardinal Ratzinger. In 2013, Rafael Serrano's extensive interview with him was published under the title Sobre Dios, la Iglesia y el mundo. He has also published two philosophical works: El marxismo: teoría y práctica de una revolución and Voltaire: tratado sobre la tolerancia. In addition, he is co-author of several monographs, as well as many theological and philosophical articles.

Since 1994 he has been the Vicar General of Opus Dei, and in 2014 he was named Auxiliary Vicar of the Prelature. Over the past 22 years he has accompanied the previous Prelate, Mons. Javier Echevarría, in his pastoral trips to more than 70 countries. In the 1960’s, as a theology student, he lived in Rome alongside Saint Josemaría, the Founder of Opus Dei. From a young age he has been an avid fan of tennis, which he continues to play.

In the upcoming days, the new prelate will propose the names of his vicars to the congress participants, as well as the other new members of the councils that will assist him during the next 8 years.

More information on the elective congress: