John Paul II and John XXIII to be Canonized as Saints. Alvaro del Portillo to be Beatified

This morning Pope Francis signed decrees approving a miracle obtained through the intercession of Blessed John Paul II and another attributed to the intercession of the Venerable Bishop Alvaro del Portillo, first successor of Saint Josemaría as the head of Opus Dei.

They are, respectively, the prior steps to the canonization of Karol Wojtyla (1920-2005), and the beatification of Alvaro del Portillo (1914-1994). In addition, the Holy Father has approved a decree concerning a miracle attributed to Madre Esperanza Collevalenza (1893-1983).

The Holy Father also approved the favourable votes of the Congregation for the Causes of the Saints for the canonization of Blessed John XXIII, the pope who in 1959 convoked Vatican Council II. The Holy See announced the approval of more decrees (see www.vatican.va).

For Bishop Javier Echevarría, prelate of Opus Dei, this news is “a happy coincidence and a cause of deep joy. Blessed John Paul II,” said the Prelate, “spent himself with untiring generosity in the service of mankind. He brought us closer to God with his rich teaching, through his words and writings, with images and so many gestures charged with meaning. His whole life was based on intimate union with Jesus Christ. You needed only to see him pray to understand the fruitfulness of his ministry.”

John Paul II and John XXIII “were truly fathers close to all the faithful, to the Church, and particularly, I can say, to this part of the Church which is the Prelature of Opus Dei.  I think they helped millions of people to feel that they were the Pope’s ‘favourite sons and daughters.’” 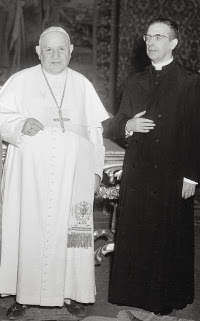 The Prelate of Opus Dei described Bishop Alvaro del Portillo as “Saint Josemaría’s best support, and a most faithful collaborator of John Paul II.” And he added: “I turn to the intercession of this good and faithful servant, and I ask him to ‘infect’ us with his loyalty to God, the Church, the Pope, Saint Josemaría, and to his friends. I ask him to win for us a share in his social concern, which was shown in the many initiatives around the world for people in need which he encouraged. I ask that he may transmit to us his special love for the family and his passionate love for the priesthood, as well as his tender and simple piety, which had such a Marian flavour.”

The miracle attributed to Bishop Alvaro The miracle approved by the Holy See is the instantaneous healing of Chilean new born baby, Jose Ignacio Ureta Wilson. A few days after birth in August, 2003, he suffered a cardiac arrest lasting more than 30 minutes and a massive haemorrhage. His parents prayed with great faith through the intercession of Bishop Alvaro del Portillo. The medical team thought that the baby had died when, without any additional treatment and in a totally unexpected way, the heart of the new born baby started to beat again, reaching 130 beats per minute. Despite the seriousness of his medical situation, ten years later Jose Ignacio leads a normal life.

Mgr Flavio Capucci, postulator of the cause, has received close to 12,000 signed accounts of favours received through the intercession of Bishop Alvaro. They include “graces of all kinds, both material and spiritual. Clearly the most striking are the extraordinary cures, of which there is a variety: from the disappearance of melanomas with metastasis after praying to Alvaro del Portillo, to the full recovery of a child who had drowned in a swimming pool.”

The postulator adds that many of these favours refer to family life: “married couples who are reconciled and live together again in harmony; the ability to have children, sometimes after waiting for many years before going to his intercession; reconciliations between estranged relatives; giving birth to healthy children after being told that the baby would be born sick or malformed. Bishop Alvaro was a family person, who carried out a wide and deep catechesis on the family. It is perhaps because of this that the desire to go to his intercession for these kinds of matters arises spontaneously.”

Mgr Capucci explained that, with the miracle’s approval, the next step is for the Holy See to fix the date for the beatification. The ceremony will most likely take place in Rome, which is where the venerable Alvaro del Portillo died.

Biographical details Alvaro del Portillo was born in Madrid on 11 March 1914, the third of eight children. Engineer, doctor in both History, and Canon Law, he joined Opus Dei in 1935. Very soon he became the founder St Josemaría Escrivá’s best support. The Decree of Heroic Virtues promulgated by the Congregation for the Causes of Saints on 28 June 2012 describes the future blessed as a “profoundly good and amiable man, able to transmit peace and serenity to souls.”

He was ordained to the priesthood in 1944. In 1946 he moved to Rome. With his intellectual work with Saint Josemaría and his work for the Holy See he carried out a deep reflection on the role and responsibility of the lay faithful in the Church’s mission, through their ordinary work and their social and family relations. Between 1947 and 1950 he spurred forward the apostolic expansion of Opus Dei in Rome, Milan, Naples, Palermo and other Italian cities. He promoted Christian formational activities and provided priestly service to many people.

From the pontificate of Pius XII to that of John Paul II he carried out numerous tasks for the Holy See. He played an active role in the Second Vatican Council and for many years was consultor for the Congregation for the Doctrine of the Faith.

On September 15, 1975, after the death of the founder, Mgr Alvaro del Portillo was elected to succeed him as head of Opus Dei. On November 28, 1982, when Blessed John Paul II established Opus Dei as a personal prelature, he appointed him Prelate, and on December 7, 1990, the Pope named him bishop. Over the years he spent as head of Opus Dei, he promoted the start of activities of the prelature in 20 new countries. As the Prelate of Opus Dei, he also inspired the start of many social and educational initiatives.

Bishop Alvaro del Portillo died in Rome in the early hours of March 23, 1994, just hours after returning from a pilgrimage to Holy Land. Since his death, thousands of people have testified in writing to his kindness, the warmth of his smile, his humility, his supernatural courage, and the peace of mind his words inspired in them.