In 1931, the founder of Opus Dei wrote down what had happened on the morning of October 2nd, 1928, when Opus Dei came into the world.

In 1931, the founder of Opus Dei wrote down what had transpired during the morning of October 2nd 1928 while attending a retreat on Garcia de Paredes Street in Madrid:. “I received an illumination about the entire Work, while I was reading those papers. Deeply moved, I knelt down—I was alone in my room, between talks—and I gave thanks to our Lord. I remember with a heart full of emotion the ringing of the bells of the church of Our Lady of the Angels...I put the loose notes I had been taking up till then into some sort of order.”[1]

The light St. Josemaría received that day was an entrance by God into history. God continues acting in the world, in the hic et nunc , in the here and now of the life of men and women. The Work is Opus Dei, operatio Dei . “God is working” insisted Pope Benedict XVI during his trip to France, citing the Gospel of St. John. “Thus human work was now seen as a special form of human resemblance to God, as a way in which man can and may share in God’s activity as creator of the world.”[2]  God will always continue working in his Church, transforming the world and converting souls. As we read in the fourth Eucharistic Prayer, the Holy Spirit was sent from the Father through the Son to bring his work to completion in the world: opus suum in mundo perficiens .

I received an illumination about the entire Work . The whole of Opus Dei was already present on October 2, 1928, although the light received on February 14, 1930, would make the founder understand that women were also to form part of the Work. While the juridical solution for the priests would not come until February 14, 1943, on October 2nd the priesthood was already present: St. Josemaría was the first priest of Opus Dei. The Work was born in the Church, and God chose a priest to found it. Opus Dei was to proclaim the universal call to sanctity and apostolate, the sanctifying value of professional work done as well as possible, when it is transformed into prayer and service to others.

Deeply moved, I knelt down . St. Josemaria’s reaction reflects his faith. To kneel is to recognize that one is facing a Mystery: a reality that is sacred and, therefore, that does not belong to us. If this exterior act is accompanied by an authentic interior attitude, it manifests both faith and humility. Everything comes from God. He counts, certainly, on our generous response, but it is He who has chosen us and loved us first. Faced with God’s goodness, the founder’s heart spontaneously poured forth an act of thanksgiving: I gave thanks to our Lord. 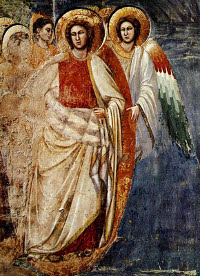 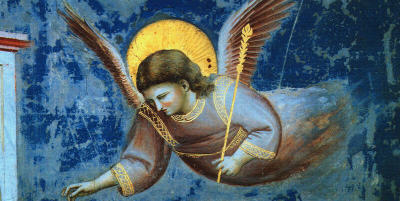 The same is true of the Work, a small “portion” of the Church, as St. Josemaria liked to say. The spirit of the Work spurs us to “serve the Church, and all men, without using the Church.”[6]  Every Christian carries with them, so to speak, the whole Church, the heavenly hosts, and the saints. All the saints, each one of them, are ours, from the good thief to St. Narcisa, the Ecuadorian woman canonized by Benedict XVI in October 2008.

In the actualization of the paschal mystery, Christ offers himself under the appearances of bread and wine, fruit of the earth, of the vine, and of the work of man. The bread is no longer bread, it is his Body; the wine is his Blood. Jesus is really and substantially present, with his Body, his Blood, his Soul and his Divinity. Ecce Agnus Dei, ecce qui tollit peccata mundi. Heaven has come down to earth, and the celestial liturgy is anticipated, the supper of the marriage feast of the Lamb, as the ordinary form of the Latin Rite emphasizes: Beati qui ad cenam agni vocati sunt . St. Josemaría would also have read those words now found in the Missal of Blessed John XXIII: Corpus tuum, Domine, quod sumpsi, et Sanguis, quem potavi, adhaereat visceribus meis. The Body and Blood of Christ filled the soul of that twenty-six-year-old priest, who was about to “see”Opus Dei.

On October 2, St. Josemaria gave thanks to God and began to work. I put the loose notes I had been taking up till then into some sort of order . Although he later thought, in his humility, that he had been slow to follow the divine inspiration, St. Josemaría worked a lot and well. Opus Dei was thus the fruit of divine initiative and human correspondence, a manifestation of the Holy Spirit guiding and sanctifying his people. As the Second Vatican Council would insist,[7]  God wanted his Church to have a renewed awareness of the universal call to sanctity, with faithful in the Church committed to sanctifying the world from within, spreading this message with their lives. 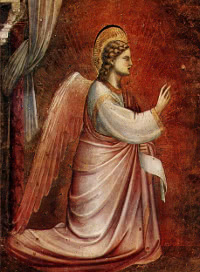 In this Marian Year that the Prelate has convoked for Opus Dei, our acts of thanksgiving are directed to the Virgin Mary, the first opus Dei by reason of excellence, as the Holy Father John Paul II said during an audience granted in the first days of his pontificate to Msgr. Alvaro del Portillo. Let us ask our heavenly Mother to make us small, humble, so we may be filled with God.

St. Josemaria speaks about the founding of Opus Dei (video in Spanish)