Youth: give your heart to Jesus

This is the third and final article of a series of three by Fr Joseph Evans on the occasion of the Synod of Bishops in Rome on Young People, The Faith and Vocational Discernment, 3-28 October 2018. This article was published in the Catholic Universe, Friday 12 October 2018. 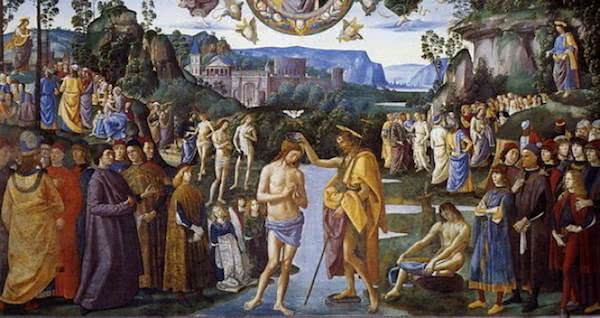 In my previous two articles I argued for the re-discovery in the Church of the spirit of childhood and the spirit of adolescent rebelliousness as key to her outreach to young people.

This time I want to focus on vocational discernment, which is one of the principal topics the Synod of Bishops has set itself to consider. When the Church is ready again to be childlike, when she is not afraid of youthful rebelliousness, when she does not fear human love, then she will be in a position to call many young people to divine love.

How can she do this? Focusing on the figure of St John the Baptist, let me offer a few ideas.

There’s that wonderful moment in John’s gospel when the Baptist is by the Jordan, accompanied by two disciples, and he sees Our Lord walking past. Was this by chance? No; the “accidents” by which God makes himself present in our lives are really expressions of his search for us.

John says some curious words which have an even more curious result: “Behold, the Lamb of God!”, he exclaimed. And we read: “The two disciples heard him say this, and they followed Jesus.”

What’s this “Lamb of God”? And why did saying this lead those disciples to go after Our Lord? The gospel tells us that one of them, it turns out to be Andrew, goes off to find his brother Peter and announces to him “we have found the Messiah”.

We’d need a book more than an article to explain this, but suffice to say that “Lamb of God” has clear echoes of that mysterious figure foretold centuries earlier by the prophet Isaiah. It also recalls the lambs of the Passover whose blood, painted on the Israelites’ doorposts, saved them from the avenging angel that night in Egypt, resulting in their liberation from slavery.

Isaiah’s suffering servant would somehow encapsulate this in his own destiny. “Like a lamb that is led to the slaughter”, he would “make himself an offering for sin”. By his death “he bore the sin of many, and made intercession for the transgressors.” His was to be the sacrifice that would save his people – not just the Jews but all men – from a far greater slavery, that of sin.

The Baptist would have explained all this to the two disciples, opening their minds to the meaning of the Isaiah prophecies. Whether or not he had been granted to foresee the Resurrection, he, as greatest of all the prophets, would at least have understood these oracles sufficiently to realise that Jesus was the one to redeem his people by his own blood.

But in announcing this sacrificial mission of Christ to these disciples, John was announcing a similar mission to them. If Jesus himself was destined to follow the way of suffering, it would have been almost impossible for his disciples to avoid this.

Thus when Andrew and the other (traditionally considered to be John the apostle) follow Our Lord, they do so aware that they too are embarking on a path which could well lead to their death. But they follow Christ.

This leads to my first major point. John the Baptist had instilled in these men a sense of commitment. Andrew and John knew they were choosing full commitment as sacrificial lambs in union with the great Lamb. They were ready to “follow the Lamb wherever he goes.” We should not fear to call young men and women to put their lives on the line in total self-giving: be this in celibacy or marriage, martyrdom or the daily dying to self of everyday fidelity.

The biggest battle the Church faces in her efforts to win vocations is to restore to society a sense of commitment.We cannot even imagine the extent of the harm caused by the introduction of divorce. It is now considered normal – even to Catholics – to think that when one has a problem, one simply walks out on it.

It is therefore striking that John the Baptist was a martyr not principally and directly for Christ. He was a martyr to defend the truth of marriage. He died, we could say, against divorce, opposing the taking by one man of another man’s wife. It’s as if God wanted to teach us that if we are to give ourselves to him, humans must know first how to give themselves to each other. It is from the mutual and total self-giving of a husband and wife that their children learn what fidelity to vocation entails.

If the Church wants to promote vocations, she must promote ever more vigorously the indissolubility of marriage and in general the beauty of absolute commitment in all its forms. This culture of commitment arises both from good formation and the practice of virtue. Andrew could go to Peter to say they had found the Messiah because both he and his brother knew what this meant. And John the Baptist, as we saw, had explained to his two disciples the meaning of the Isaiah prophecies.

Likewise, when Jesus “found” Philip and called him to follow him, Philip in turn found Nathanael. Again, the role of good formation is shown here. Philip can inform his friend that “we have found him of whom Moses in the law and also the prophets wrote”. These texts meant something to both of them. They had at least some awareness of their people’s sacred writings and beliefs.

There is a basic knowledge a person must have in order to respond to Christ. Ignorance hinders people not just from responding to Christ’s call but even from heeding it. It is a language they simply do not grasp. Thus St Paul asks: “how are men to believe in him of whom they have never heard? And how are they to hear without a preacher?”

Improving drastically the doctrinal formation we give to people is essential to promote vocations.

But they also need virtues. Thus, when Philip brings Nathanael to Christ, Our Lord praises the latter for his sincerity, as “an Israelite indeed, in whom is no guile”. Similarly, Peter, Andrew, James and John had the generosity and poverty of spirit to leave nets, boats, family and everything to follow Our Lord.

It is human qualities like these – sincerity, poverty of spirit, generosity – which prepare the soil to receive Christ’s seed. St Josemaría would particularly insist on the importance of sincerity for young people. If we know how to share our problem or our failing with the right person, opening our soul and revealing our wounds, these are usually quickly healed and seen to be not that serious. Discernment involves knowing how to ask for help.

I asked earlier why these two disciples had attached themselves to John. This leads us to another important lesson about discernment. It needs credible witnesses. John attracted others by the integrity, even austerity, of his life and his honest and courageous proclamation of truth. People searching for meaning found their way to him because he was humble enough to look beyond himself to Jesus. We see in John’s gospel that a little nucleus of searchers had developed: first Andrew and John, with Andrew then finding Peter and John, as suggested by other gospels, finding his brother James. Good young people find each other, though we also need to create healthy environments and communities where they can meet.

There seems to have been something about that area to the north of the Sea of Galilee which created good conditions for souls. Where might be those places and environments which offer hopeful prospects of a good catch? We need to ask ourselves questions like this.

Allow me to ask two final questions: why does Pope Francis stress respect for the elderly and the role they play so much? And why does he often speak about them together with young people, the latter as a people’s hope, the former as its memory?

Firstly, because vocation is ultimately a call to the fullness of love, and the fullness of love also involves love for the weakest and most needy, which often include the elderly. Involvement in works of mercy is an important part of vocational discernment. By striving to love others, one opens oneself to God’s love.

In our “throw-away culture” where more and more the elderly are “discarded” – to use the Holy Father’s very apposite terms – we have to create a new culture in which all are valued and cared for, in which we are committed to all as all are our neighbour. The fullness of love is also love for the very unglamorous.

But unless God takes us early in our lives, we will be among those elderly, facing the trials which old age brings with it. “Rejoice, young man, in your youth”, the biblical preacher warns us, aware not only that we will be judged for how we have lived our young years but aware too that we must face “the evil days” of physical and mental decline when “strong men are bent”.

Commitment is only commitment if it carries us through to fidelity in old age. We would gain a lot both by meditating on elderly saints of the Bible – Eleazar, Abraham, Simeon, Anna and others – and by learning from the holy old men and women in our families and communities. And perhaps, together with Our Lady, who gave herself entirely to God both in marriage and celibacy, we could also invoke the intercession of the apostle John, entrusted to her care at the foot of the Cross.

I have already mentioned how Tradition suggests he was that other disciple with Andrew when John the Baptist pointed out Christ to them. We later encounter him as “the elder” of his three epistles. Tradition also tells us how as an old man he constantly called on Christians to love one another. So, this great saint can teach us how give our hearts to Christ in our youth and how to keep that love aflame into a ripe old age.

Fr Joseph Evans is chaplain to Greygarth Hall, a university hall of residence in Manchester promoted by the Opus Dei prelature.