Wanted: a new and dynamic generation of Jesuses to set our faith ablaze again

As the Synod on Youth takes place in Rome this month, we offer three articles on the Church and young people written by Fr Joseph Evans and published in the Catholic Universe. This second article was published on Friday 5 October 2018. 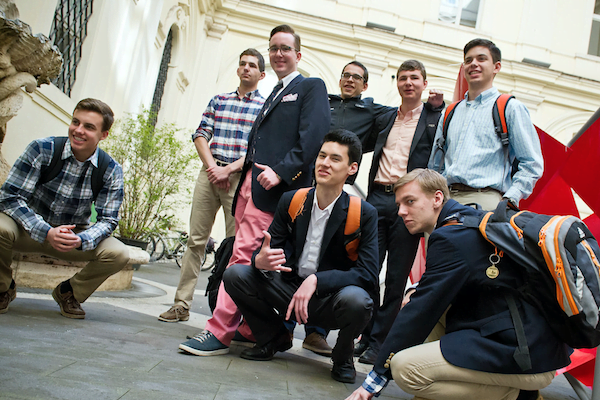 The gospels present us with two youths who respond to God in radically different ways. The first is a rebel, seemingly stroppy, but who is generous and, albeit at the cost of great suffering, ends up happy. The second is wealthy who starts well and appears interested in faith but when demands are made of him he draws back and goes away sad.

The latter figure, I am sure, is easily recognisable to most of you as that rich young man who appears in the three synoptic gospels. He comes to Christ full of good will, asking questions about eternal life and showing himself to be a noble and clean-living youth. But when Our Lord asked him for more, he was not ready to give. As we read in Matthew’s version: ‘Jesus said to him, “If you would be perfect, go, sell what you possess and give to the poor, and you will have treasure in heaven; and come, follow me.” When the young man heard this he went away sorrowful; for he had great possessions.’ His response – more in deed than words – was a miserable ‘no’.

But who was the rebel? Could it be the apostle John? Not he, for while tradition is no doubt right to see John as the son of Zebedee, nicknamed the Son of Thunder, and the beloved disciple of the fourth gospel, nowhere does the Bible explicitly state that he was young when Jesus called him. This comes from the Church’s oral not written memory.

The rebel I am talking about is in fact Jesus himself, the twelve-year-old youth who felt urged to stay on in the Temple and rebuked his own mother when she tried to draw to his attention the fright he had caused his parents by so doing.

While there can never be any possibility of sin or imperfection in Jesus, he was nevertheless truly man at every stage of his human existence (and still is), with all the constraints this involves. If not, the Incarnation is not real. Hence, when he was an adolescent, he was also truly an adolescent with the limitations (“tell me about it!” I can hear many parents exclaim) which necessarily accompany this period in life. He was the perfection of adolescence within the restrictions of its very nature as earlier he had been the perfection of childhood in each of its phases, within their restrictions.

And I think in Jesus’ positive example and the rich young man’s negative one the sacred text offers us key lessons on the Church’s outreach to youth, particularly in their adolescent and young adult years. Let us pause to consider them.

This episode shows that Joseph and Mary had brought up Jesus wonderfully. First of all, they had educated him to see and love God as his first and principal Father. Of course, his divine status played a massive – an infinite – role in this but I suspect that the Holy Spirit wants us to see above all the human Jesus in this precious episode which St Luke has preserved for us.

Joseph, acting as a deeply loving and caring father, had helped Jesus develop a deep sense of divine paternity. Through the paternal affection he received from Joseph and Mary’s own joy in God, Jesus had come to love humanly God the Father. Indeed, for him God’s fatherhood came before anything else.

Thus, in Jesus’ response to Mary there seems genuine surprise. “How is it that you sought me? Did you not know that I must be in my Father’s house?” As if to say, “Isn’t it obvious? You taught me to love God as my Father and to put him first. You, as pious Jews, taught me to value the Temple, God’s footstool on earth, above all other places. Why didn’t you realise immediately I would be here? I had to be here.”

It reminds me of something St Josemaría would say when Christian parents complained if one of their children had dedicated him or herself in celibacy to Opus Dei, the organisation which he had founded. He would tease them gently that really it was “their fault” for having brought up their children so well as to be able to respond to God and hear the divine call when it came.

In Jesus’ answer there resounds the deep spiritual and religious formation his parents had given him. Jesus will later preach: “He who loves father or mother more than me is not worthy of me”. But he learnt from his own father and mother to put God ahead of them.

Yet there’s more. The episode also tells us something about this boy’s relationship with his parents. He is able to say no to them because he has a lot of confidence with them and they with him. Isn’t it beautiful how Mary complains to Jesus, like any mother complaining to her adolescent boy for his thoughtlessness? “Son, your father and I have been looking for you anxiously.” And his seemingly insensitive reply shows more trust than rudeness.

Joseph holds back for Mary to speak both because worried mothers must always be allowed to speak first and also because the patriarch is strong enough to know when to bite his tongue.

Given the reverence owed to fathers at that time, any word from him could seem like a rebuke and that would not be appropriate. The son’s human strength of character is thus a reflection and even a fruit of his father’s strength. The son learns to be strong from his parents, from what they do, from what they say and what they manage not to say.

In the young Jesus we see the healthy rebelliousness of adolescence. Sure, he’s not desperately tactful in his response (parents, learn: even the sinless, all-holy Jesus can give an apparently insensitive and ungrateful reply). Like all adolescents, there is no multi-tasking in his vision. At that moment he is unable to see beyond the one value his human mind formulates: his Father’s priority. Even for Jesus, getting the wider picture will only come with age.

But he is determined in doing what he believes to be right, without calculating. Thank God adolescents don’t think! Thank God generous youths, in discerning God’s call for them, might not be able to see beyond that call to all the issues their parents would like them to consider.

And so Jesus is able to say no to his parents and, as we will later see, to anyone else who might try to stop him fulfilling his Father’s will. This is no meek lamb, this is the lion of Judah, even at the age of 12!

In Jesus, the rebelliousness of youth, its generous and single-minded idealism, its capacity for self-giving, becomes a human instrument of his divinity. He feels his father’s call – to stay on in the Temple – and he responds without calculation, even, as a typical adolescent, without calculating the effects this might have on others.

The pampered rich young man, however – who knew the theory, who was even full of good desires and, when they weren’t difficult, good actions – was the classic soft kid of today and of all time, the sort of kid produced in a family with too much money and with a woolly, touchy-feely altruism as its moral compass.

Jesus could say no even to those people whom he most loved when the service of God required it. The rich young man couldn’t even say no to his creature comforts. He was the tragic illustration of someone whom, in Pope Francis’ marvellous image, had confused true happiness for “sofa happiness”.

Jesus, on the other hand, is the perfect example of someone who, again in the Pope’s words, was able to trade in the sofa for a good pair of walking shoes to go out when the time came to proclaim God’s word throughout Israel.

But for all the rich youth’s failings, he had one thing in his favour which many youths today no longer have, namely, some sense of eternal life and a desire for it.

He came to Jesus looking for this life and went away when this required too much. Many Western young people no longer seek eternal life and will certainly not come to Jesus, and even less to the Church, to search for it.

This then leads us to the final part of our analysis and takes us back to the rebel Jesus. This stroppy youth (as he appears to us) has two final lessons to teach both young people and parents of adolescent children: youths need to be inspired to learn their faith and then to spread it.

Jesus stays in Jerusalem also because he has a desire to learn. His parents eventually find him “sitting among the teachers, listening to them and asking them questions”. The good parental formation he has received has fostered in him a healthy curiosity – a key aspect of any young mind – and he wants to know more. The faith he has been taught at home was not a boring imposition but an exciting springboard stimulating his heart and head to go further.

This young rebel went out himself to find men who would respond to God – the rich young man didn’t but a good number of poor fishermen did, and a tax collector, and an agitator against Roman rule, and later the tent-maker Saul who in turn made young disciples like Timothy, and many others.

When mankind was going sad away from God, God came to earth to seek after man. Christ wants generous youths, poor in spirit, to help him find lost youths, to save them from empty consumerism and bring them back to the pastures of eternal life, firstly by restoring their very interest in this life.

This young man grew to be the ultimate rebel, to rebel against the staleness and rigidity of Israelite religion and the gross corruption of pagan society, even though he paid for his revolt by death on the cross. But as he is himself eternal life and so eternal youth, death could not hold him and he rose again.

Let us pray that the synod and whatever teaching, measures and initiatives might arise from it will lead to a rediscovery of rebellion not against the Church but init. The 12-year-old Christ must be the synod’s primary point of reference. At this age he is both child and adolescent, expressing the fullness of youth.

We don’t need flabby goody-goodies like the rich young man who jumped from the pot when the temperature got too high. We need new rebel Jesuses on fire with the Spirit and who, like him, have come to bring that fire to the earth.

Fr Joseph Evans is chaplain to Greygarth Hall, a university hall of residence in Manchester promoted by the Opus Dei prelature.