She gave everything with a touch of humour

Oro Laviña (1928-2020), one of the early women members of Opus Dei, who worked with saint Josemaria and blessed Guadalupe Ortiz, spent many years helping to establish Opus Dei and its apostolates in Britain. 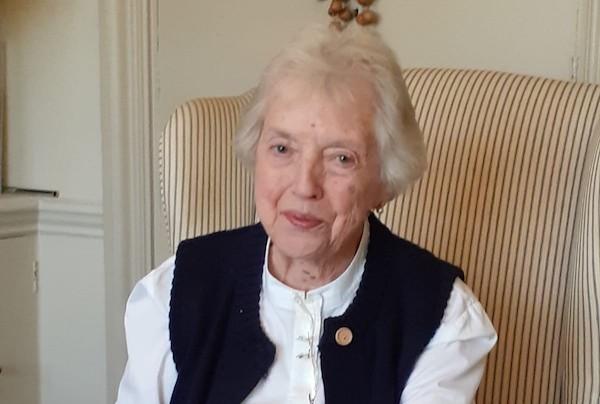 Orosia Laviña (Oro) was born in on 1st July 1928 in Calanda, Aragón and named after St Orosia, patron saint of Jaca, where her family came from. Later the family moved to Seville and she attended university there. She was an excellent student who considered the possibility of a university career. Through her friendship with fellow students and an Opus Dei priest, she grew closer to God and saw He was calling her to follow him in Opus Dei.

Oro combined her deep love for God with a fortitude and a strength of character together with an enormous warmth and love of life. These qualities endeared her to everyone who met her, as shown by the tributes and testimonies which have arrived from all over the world. Everyone felt loved by her and encouraged, in a very practical way, to love God more and be a better person.

Oro joined Opus Dei when there were relatively few female members. She decided to put her considerable energies and talents into the development of apostolic and social projects communicating Opus Dei’s central aim of helping lay people to follow Christ in their ordinary lives.

She was a woman ahead of her time in her vision for women’s education and development, responsible with Blessed Guadalupe de Landazuri in establishing a students’ residence in Madrid (Zubarán) and later one in Pamplona (Goimendi) in 1963. These were innovative projects that opened up cultural and spiritual horizons for many young university women. There, they learned to find God in their ordinary life and many were inspired to follow Christ in Opus Dei. Her entrepreneurial talent was shown in her involvement in the establishment of the conference centre, Molinoviejo, near Segovia.

Another striking characteristic of Oro was that, while being very proud of her Aragonese and Andalusian roots, she had an open heart and mind that led her to embrace other cultures with enthusiasm. In 1965, St Josemaría asked her to go to Rome to be responsible for the department of studies in Opus Dei’s central government for women. She did this until 1972 when she volunteered to come and work in Britain together with three other women. This was typical of Oro’s magnanimity.

Oro and her companions provided a great injection of energy to the work Opus Dei was developing in the country and she worked tirelessly to expand horizons, inspiring others with her faith and determination, always in close and affectionate alignment with Opus Dei’s founder. Oro also worked in Ireland, spending a week there every month and from then on the Irish people always had a special place in her heart.

In Britain, Oro’s entrepreneurial skills and vision were quickly in evidence. She saw the need to expand the Prelature’s capacity to develop apostolic projects. In 1978, Shelley House was acquired, next door to Dawliffe Hall in Chelsea. She was also instrumental in the setting up of a large women’s university residence in London. For over a year, she visited building after building until a suitable one was found on City Road. This was followed by months of intense fundraising from both private and public sources and the new Ashwell House opened its doors in 1990.

She was closely involved in the setting up of the Baytree Centre for refugee women and girls in Brixton (London), Winton Family Centre in Oxford, the university residence, Coniston Hall, in Manchester and Hazelwood House conference centre in Glasgow.

Oro had a deep understanding of every human being’s longing and need for an environment in which they are loved and treasured for themselves in their entirety and not for what they know, or earn or do. Knowing how to create these environments, at both a personal and professional level, is part of the mission of Lakefield Hospitality College, a project to which Oro was fully committed and gave generously of her time and energy.

One of the last projects with which she was involved was Hillcrest Family Centre, close to Oakwood School, the latter founded by parents who wanted their children to be educated in Catholic values informed by Opus Dei’s charism. She was closely involved in Hillcrest's activities, helping to lay the foundations of a thriving apostolic project.

In later years, she never faltered in her generous dedication to others, helping out with whatever she could and always contributing to the happiness of all around her with her affection and sense of humour. Oro was never demanding for herself and grateful for the smallest of kindnesses (especially if it was ice cream…). She left us very peacefully on the morning of 18 November 2020 while those who had lived with and cared for her prayed the rosary at her bedside.