"The run of his life" – article published in "Aleteia"

Kyle Lang, a Princeton student, took part in a coast-to-coast run last summer to raise money for charity. He says that Saint Josemaria's writings on sanctifying ordinary life taught him to incorporate his faith into his sport. 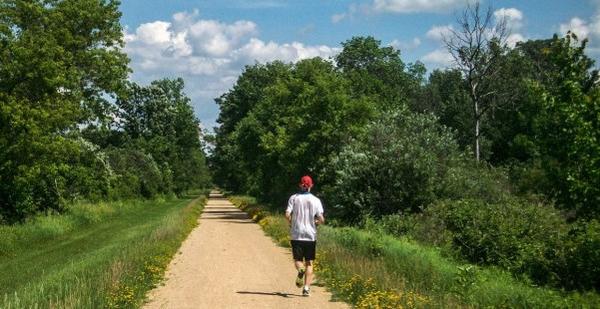 Kyle Lang and his friends looked not too different from any other 20-somethings on the beach at New York’s Coney Island last summer. It was a Saturday near noon in the middle of August, with a high of 86, so it wasn’t surprising that they would take off their shirts, kick off their shoes and jump in the water.

But Lang had come a lot farther than most of the folks who were enjoying the beach, the boardwalk, the Nathan’s hot dogs and amusement park rides that day.

He had come from Washington state—on foot. Running.

Lang, 20, who was joined on the last day of a 76-day trek by a few friends from school, had completed a 3,016-mile run. Each day, with one or two exceptions, he ran about 40 miles—in essence, a marathon and a half.

Leaving North Cove, Washington, on June 5, Lang took a northerly route that brought him from the heights of the Rockies to the plains of the Midwest, skirting Chicago, and passing through his hometown of West Salem, Wisconsin, and his adopted state of New Jersey, where he is a junior at Princeton.

He wore out nine pairs of running shoes.

In an interview, he traced the origin of the cross-country adventure back to his grandfather, who gave him Christopher McDougall’s book Born to Run. The book “inspired me to run my first marathon, when I was 16,” Lang said. After that, he decided to run the length of a local bike trail, which is 101 miles, as part of a high school exit project. “I did it in two days to raise money for a couple of organizations.” Finding himself capable of running 40-50 miles a day, he was then inspired to take on the coast-to-coast challenge. …

Lang began lining up corporate partners and sponsors and planning a route. During spring semester last year, he began training in earnest, doing 30- or 40-mile runs on weekends and 10- to 25-mile runs during the week, “to try to make sure I was capable of sustaining high mileage.” He would do 35 miles around a track, “just to get used to the mind-numbing boringness of what the summer might be.”

“The week before I started the run, my parents and I had a very serious conversation about what I would push myself to do and what signs we would have to look out for that might make us decide to take a day or or cut back miles or end the run completely,” he said. “I didn’t want to do any lasting damage to my body.”

Friends helped him set up a website for the run, which he dubbed Running United 2017. The site allowed followers to see exactly where he was on a map at any given moment.

Aside from running, Lang wanted to give back to nonprofits in three communities that have had a major impact on his life: Great Rivers United Way, which serves four counties in Wisconsin and Minnesota; Every Hand Joined, a cradle-to-career initiative serving the community of Red Wing, Minnesota, where he interned the previous summer, and Special Olympics New Jersey, which provides year-round sports training and athletic competition in a variety of Olympic-type sports for children and adults with intellectual disabilities.

“I think the first two weeks, my body was just getting used to being on my feet 12 hours a day, saying ‘What are you doing? Why are you doing this? You shouldn’t be doing this.’ And my body tried to get me to stop. Around day 5 I developed shin splints in my right leg, and that forced me to take a full day off.”

There was mental exhaustion as well. “Once in Wisconsin, and after I ran through my home town, I just got so mentally exhausted that I almost felt like I had lost the ability to complete the journey,” he admitted. “I knew I was capable of waking up the next day and covering 40 miles. To me that didn’t feel like that big of a deal. My body had become so accustomed to what I had been doing for the last 50 days. But mentally I was just ready for it to be done.”

On his blog, Lang described some of what would go through his mind at times, particularly when the going got tough:

Lang already had a way to direct his physical and mental challenges. At Princeton, where he is studying psychology, he got involved in Catholic campus ministry through the Aquinas Institute. He also got to know Opus Dei, the personal prelature founded by St. Josemaria Escriva and which emphasizes growing in holiness through one’s ordinary activities in everyday life. A member of Opus Dei he got to know at Princeton is also a runner and encouraged Lang to incorporate his faith into his sport.

“St. Josemaria’s writings on the ordinary life really spoke to me,” Lang explained. “The mundane tasks. Running can be compared to a mundane task—something that’s just repetitive. Being able to find meaning beyond the task itself is something I wanted to grasp and take hold of.”

His friend introduced him to the concept of “mile intentions,” offering up a length of a run to God as a sacrifice for a particular prayer intention.

“Generally, miles 12-16 in the morning were more difficult. And in the afternoon, the 7th to 10th mile were difficult,” he recalled. “I tried to plan for when I was at a mentally taxing point I would have a specific mile intention, so I could be thinking of that while I was going through a difficult stretch of the day.”

Thinking about them would help him carry on.

On the last day, Lang started his run on the New Jersey side of the Hudson River, near the George Washington Bridge. His mother, who is also a runner, ran the whole 24 miles with him to Coney Island in Brooklyn. A couple of friends joined in at various points. Lang ran right through the campus of Ivy League rival Columbia University, down Broadway, through Times Square and Chinatown and across the Manhattan Bridge into Brooklyn. Seventy-six days after a pre-run dip in the Pacific Ocean, he was about to dive into the Atlantic.

“Coming down Ocean Parkway, you could feel the ocean breeze, and it just got quiet,” he recalled. “With about four miles to go, we started praying the Rosary, and there was silence for the last mile.”