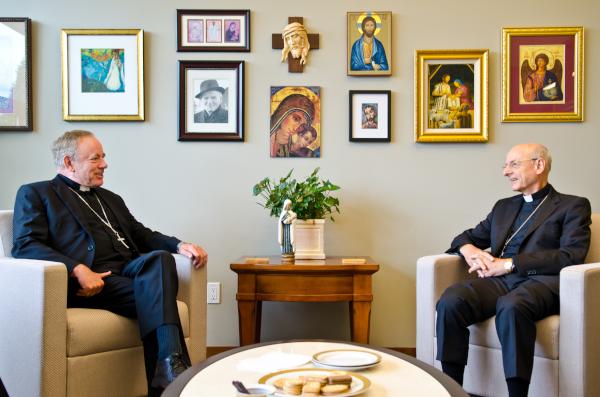 In the morning, the Father met Archbishop J. Michael Miller a longtime friend of the Work. Then, he had a meeting with priests and encouraged them to grow in hope and face the challenges the Church encounters. He stressed the importance of unity with the Holy Father.

In the afternoon, the Father also met a group of young women at Crestwell Cultural Center. They greeted him by singing A million dreams.

The Prelate took advantage of the song to remind them that dreams can be good and that the love of God is fundamental and it is not a dream. It gives us faith and confidence.

Mary-Jo, who will begin University in the fall, asked him for advice on how to talk with persons who do not share her way of thinking. The Prelate encouraged her to be friends with people, not thinking exactly the same as the other person, but rather to look for their good, even if she has different opinions. It implies interest for the other person, and to share what we have in our heart. 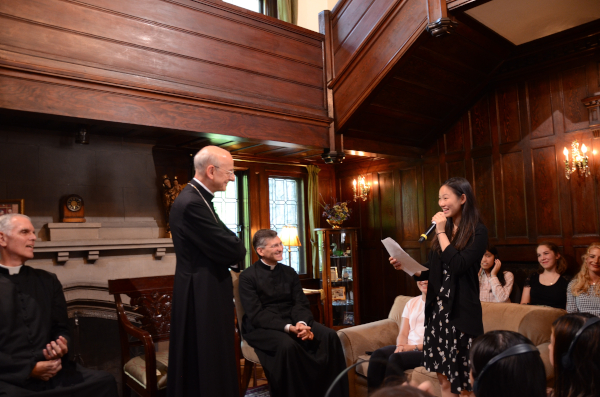 Isabel from Vancouver, asked how not to fall into routine in the prayer life, or look upon it as a boring duty rather than something she enjoys. She is never bored with friends, so why does she become bored while talking to God? The Prelate explained it is because we are weak and we do not see Our Lord. We believe but do not see. It’s a question of faith: thinking of Jesus as Someone rather than an idea, and as someone who loves us madly.

Among the girls were all the staff members going off to Camp Misawannee right after the get-together. Bev and Sami, the oldest counselors, presented the Prelate with a green camp T-shirt marked “Honorary Camper”! At the end of the get-together, they took a selfie of the whole group with the Father.

In the evening, around 40 high school, university and young professional men coming from the Lower Mainland, Victoria, and Alberta attended a get together with the Father. 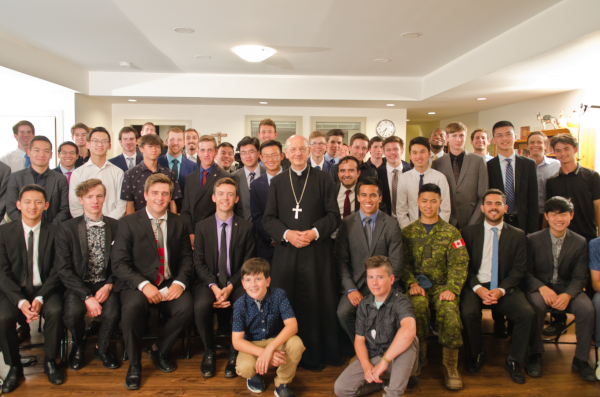 Some students asked about how to evangelize their classmates and bring them Christ. The Father answered that the apostolic work is not just for some people, but for everybody. Those who receive formation have responsibility: family, workmates, classmates. Think how you can be more efficacious, to be apostles. We are sent by Our Lord to help others, to live the Gospel. Think about the 12 apostles, preaching with all their efforts, they’re placed in jail. All became martyrs, except St John, who suffered martyrdom but did not die right then. The Father encouraged the students to have no fear or shame to go against the current when it is difficult or to go against the whims and fashions.

He answered a question from John Paul: encouraging him to think of Jesus Christ who sustains our battles, the triumphs of which we don’t see immediately. This should lead us to Eucharist, where we find the strength.

Nicholas presented an Inukshuk to the Father, a statue made of rocks in the shape of a person. For the Inuit, Canada’s native people of the far north, the inukshuk is a marker to indicate places of importance. It symbolizes friendship, hope and safety. 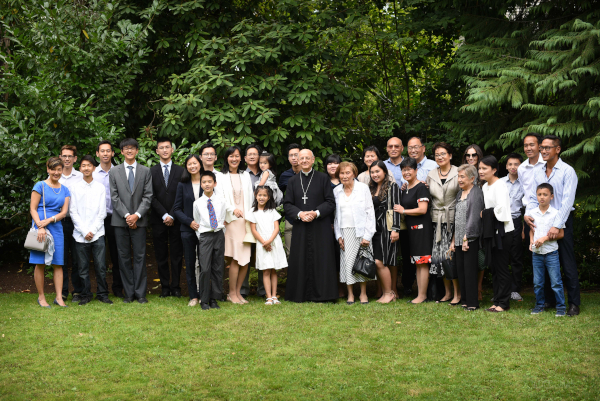 After both meetings with young people, several families were received by the Father. One of the families was Marietta’s, she arrived to Vancouver in 1973 and was the only faithful of the Prelature at the time. Since then the Work has grown in the Canadian West. She was moved when the Father thanked her.