Sanctifying "the noble professions of medicine and nursing" 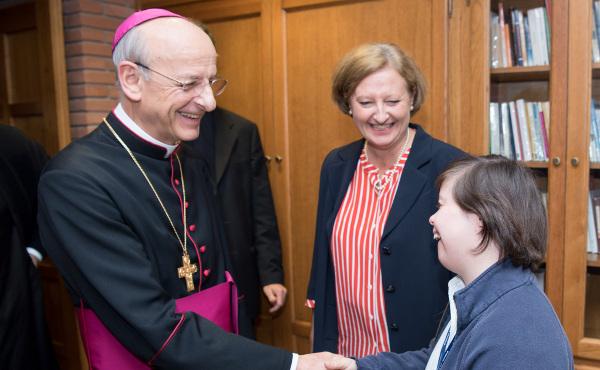 “Where the Holy Spirit is found, where he is welcomed, life increases. He wants to live among us. He wants to make the Campus Bio-Medico an ever more closely united community, a place where people learn to combine professionalism with sincere affection for each person.”

With these words, Monsignor Fernando Ocáriz, Prelate of Opus Dei, addressed students and professors at the Campus Bio-Medico University in Rome, for the inauguration of the 2017-2018 academic year. The Campus Bio-Medico began as an initiative of Blessed Alvaro del Portillo almost 25 years ago.

The Prelate in his homily at the Mass on November 22 stressed the spirit with which the university began, citing some words from Blessed Alvaro’s homily at the Mass inaugurating the academic center. “May Christ’s doctrine and love guide and imbue more deeply the exercise of the noble professions of medicine and nursing. Without the guidance and impetus of this doctrine and this love, these fields can become a matter of cold techniques that lack a higher perspective; and instead of furthering mankind’s good, they can become realities opposed to human life and dignity.”

Among the recent social initiatives being carried out by the Campus Bio-Medico is the joint project with Parma University and two African universities to try to overcome malnutrition in poor districts in Tanzania.

“I would also like to remind you,” the Prelate continued, “of another piece of advice that Blessed Alvaro gave us. Realizing the difficulties that an initiative of this type can face, especially at the beginning, he said: ‘I encourage you to work with a spirit of unity and understanding, with optimism; only in this way will you overcome all the obstacles, with God’s help. You will be happy and you will attain sanctity and help others to do so, because you will be practicing the commandment of charity.’”

The Mass was followed by the academic act in the Aula Magna. Taking part were the minister for health, Beatrice Lorenzin; the rector, Raffaele Calabró; the president of the Campus Bio-Medico University, Felice Barela; Giorgio Minotti, director of the department of Medicine and Surgery; as well as the student representative, Cristina Madaudo.