Organization of the Prelature

The Prelature of Opus Dei is governed by a Prelate, in accord with canon law and its own statutes. The Prelate and his vicars always carry out their work assisted by councils, made up largely of laity. The council for women is called the Central Advisory and the council for men is called the General Council; both are based in Rome. 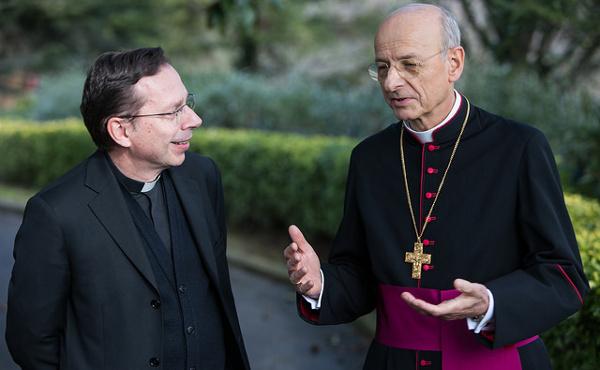 The Prelate of Opus Dei is Msgr. Fernando Ocáriz.

The Prelature of Opus Dei is governed by the provisions of the general law of the Church, by the apostolic constitution Ut sit, and by its own Statutes (or code of law specifically applicable to Opus Dei). The Code of Canon Law of 1983 sets out the basic provisions covering personal prelatures in canons 294-297.

The Prelate is the proper Ordinary of the Prelature. He and the vicars who represent him have jurisdiction in Opus Dei. Currently, the Prelate is Msgr. Fernando Ocáriz, the Auxiliary Vicar is Msgr. Mariano Fazio, the Vicar General is Rev. Antoni Pujals, and the Vicar Secretary is Rev. Jorge Gisbert. The Prelatic Curia has its offices at Viale Bruno Buozzi 73, 00197, Rome, Italy.

Priests of the Prelature depend fully on the Prelate. He assigns to them their pastoral responsibilities, in the fulfillment of which they closely follow the pastoral guidelines for the diocese in which they live. The Prelature is responsible for the financial support of its priests. The lay faithful also depend on the Prelate in all that refers to the specific mission of the prelature. They are subject to the civil authorities in the same way as any other citizen, and to other ecclesiastical authorities in the same way as any other lay Catholic.

The style of government in the Prelature is collegial. The Prelate and his vicars always carry out their work assisted by councils, made up largely of laity. The council for women is called the Central Advisory and the council for men the General Council; both are based in Rome.

The Prelature is divided into areas or territories called regions. At the head of each region, whose limits may or may not coincide with those of a particular country, is a regional vicar and two councils: a Regional Advisory for women and a Regional Commission for men. Some of the regions are further subdivided into delegations. Within the limits of its territory, a delegation has a corresponding governmental organization: a vicar of the delegation and two councils. Finally, at the local level, there are the centers of Opus Dei. These are dedicated to organizing means of formation and pastoral care for the faithful of the Prelature in a particular area. Centers may be for women or for men. Each center is governed by a local council, which is headed by a layperson (the director), and consists of at least two other faithful of the Prelature. For the priestly care of the faithful attached to each center, the Ordinary of the Prelature assigns a priest from his presbyterate.

No office of government, other than that of the prelate, is held for life.

The Prelature does not intervene in the temporal questions that confront its lay faithful, in virtue of the exclusively spiritual nature of its mission. Each member acts with complete personal freedom and responsibility, and Opus Dei does not treat the decisions of its members as its own. The Statutes lay down that in matters pertaining to professional, social and political activity, each of the faithful of the Prelature, within the limits of Catholic doctrine on faith and morals, has the same full freedom as other Catholic citizens. The authorities of the Prelature must totally avoid even so much as giving advice on these matters.