Feast of the Presentation of the Lord in the Temple

The feast of Jesus' presentation in the temple forty days after his birth, celebrated on February 2nd, has a long history in the Eastern and Western Church. 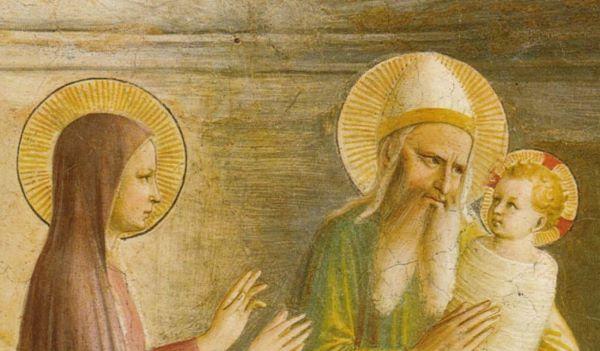 Presentation of Jesus at the Temple by Fra Angelico (Wiki Commons)

Audio Meditation for Feast of the Presentation

The Mosaic law prescribed that every firstborn male in Israel had to be consecrated to God forty days after birth and redeemed with a sum deposited in the Temple treasury. This was in remembrance of the firstborn sons being preserved from death on the night of the first Passover during the exodus from Egypt. The Gospel according to St. Luke gives us this account of Jesus’ presentation in the Temple: when the time came for their purification according to the law of Moses, they brought him up to Jerusalem to present him to the Lord, as it is written in the law of the Lord, “Every male that opens the womb shall be called holy to the Lord.”[1] St. Joseph and our Lady entered the temple, unnoticed among the crowd. The “desired of all nations” came to the house of his Father in his Mother’s arms. The liturgy of this feast-day exhorts us, in the Responsorial Psalm, to adore the King of Glory in the heart of his humble family: Attolite, portae, capita vestra, et elevamini, portae aeternales, et introibit rex gloriae: “Lift up your heads, O gates! and be lifted up, O ancient doors! that the King of glory may come in.”[2]

The Church of Jerusalem began the annual commemoration of this mystery in the 4th century. The feast was celebrated on February 14th, forty days after the Epiphany, because the Jerusalem liturgy had not yet adopted the Roman custom of celebrating Christmas on December 25th. That is why when this became the common custom throughout the whole Christian world, the feast of the Presentation was moved to February 2nd and was soon celebrated throughout the entire East. In Byzantium, the emperor Justinian I introduced it in the 6th century, under the title “Hypapante” or “encounter,” referring to Jesus’ encounter with the aged Simeon, who was a figure of the just men of Israel who had patiently awaited the fulfillment of the messianic prophecies for so many years.

During the 7th century, the celebration also took root in the West. The widespread name of Candlemas comes from the tradition instituted by Pope Sergius I of having a procession with candles. As the elderly Simeon proclaimed, Jesus is the Savior, prepared in the presence of all peoples, a light for revelation to the Gentiles.[3] In commemorating the arrival and manifestation of the divine light to the world, the Church each year blesses candles, symbol of Jesus’ perennial presence and the light of faith that the faithful receive in the sacrament of Baptism. The procession with lighted candles thus becomes an expression of Christian life: a pathway illuminated by the light of Christ.

The annual commemoration of the Presentation of the Lord in the Temple is also a Marian celebration and therefore at certain times in the past it was also known as the feast of the Purification of Mary. Even though Mary was preserved by God from original sin, as a Hebrew mother she chose to submit to the Law of the Lord, and therefore offered a pair of turtledoves or two young pigeons.[4] Mary’s offering was thus a sign of her prompt obedience to God’s commands. “Through this example, foolish child, will you learn to obey the Holy Law of God, regardless of any personal sacrifice?”[5]