Among the Poor and the Sick

Among the poor, the sick, and the children, he sought the strength needed to set in motion the immense project that God had placed on his shoulders that day. It was a school of suffering where his soul would be tempered to its mission. 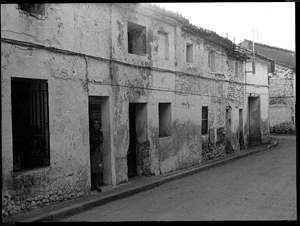 “What would you like to do if you were rich, very rich?”

This unusual question came from the lips of young Father Josemaría, fresh from his priestly ordination and caught up in his first assignment to Perdiguera, a village with a population of a 800 not far from Saragossa. He was speaking with the son of the family with whom he lodged, a little boy who spent each day pasturing goats, and to whom he taught catechism each evening in preparation for First Holy Communion. “One day, to see how much he was learning, it occurred to me to ask him:

‘What would you like to do if you were rich, very rich?’

‘What does being rich mean?’ he answered.

“I explained it in a simple way and continued: ‘To be rich is to have a lot of land, and instead of goats, very big cows. And to go to meetings, change suits three times a day… What would you do if you were rich?’ His eyes opened wide, and then at last he said: ‘I’d eat lots of bowls of soup with wine in it!’

“All our ambitions come down to that; nothing is worthwhile. Strangely enough I have never forgotten that story. It struck me and made me think: ‘Josemaría, it is the Holy Spirit speaking.’ God in his wisdom did this to teach me that the things of the earth, all of them, come to that: very, very little.”

He had arrived in Perdiguera three days after his ordination, sent to substitute for a priest on an emergency basis. It was an out-of-the-way village in a then-underdeveloped region. The first thing he had to do upon arrival was clean the church. The second thing he did was to reorganize the celebration of worship. He introduced a sung Mass, Benediction of the Blessed Sacrament, confessions, catechism… Ignorance and neglect reigned. In a short time the spiritual climate changed, to the point that fifty years later, at the time of his death, the people still fondly remembered Father Josemaría’s short stay.

Nevertheless the young priest was aware that God was calling him to another task that he did not yet know, and once his duties of filling in for the parish priest were over, he was back in Saragossa with the idea of finishing his law degree. This he did, and with his usual good grades. With the permission of the archbishop he transferred to Madrid to pursue his doctorate in law, which at that time could only be obtained at the Spanish capital’s Central University. He suspected that he would be able to carry out whatever God had in store for him more easily there.

In Madrid, he immediately encountered the misery of the poor inhabitants of shantytowns, which housed mainly newcomers from the countryside for whom the promise of jobs in industry had been a mirage. He took up lodging in a modest residence for priests on Larra Street sponsored by the Congregation of Apostolic Ladies of the Sacred Heart of Jesus. These women took care of the Foundation for the Sick and many other charitable works, such as catechism in areas without schools, food pantries for the indigent, night classes, dispensaries. Father Josemaría immediately made himself available to help in these services to the marginalized and collaborated to help these pious women while he attended to his studies.

From 1927 to 1931 he was chaplain of the Foundation for the Sick, dedicated to assisting people who, in addition to being abandoned, were easy targets for anti-Catholic ideologies and often hostile toward the clergy. Many years later, on a return visit to that part of Madrid, now completely changed, he recalled, “When I was 25, I used to come frequently to these undeveloped areas to wipe away tears, to help whoever was in need, to bring a little warmth to the children, the old people, and the sick; and to receive a lot of love in return and… once in a while, a pelting with stones.”

He walked from one part of the city to another bringing the sacraments to the sick and dying according to information provided by the Apostolic Ladies. Other times he went to hear the confessions of children. He recalls having prepared thousands for their First Holy Communion in this era. There was no lack of dramatic and tense personal situations that he soothed with charity and doctrine.

The school of suffering 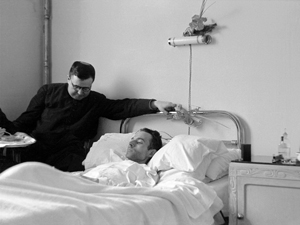 He rightly intuited that God’s plan for him did not lay in this expansive work of charity. Nonetheless, he threw himself into it heart and soul, especially after receiving his founding vision on October 2, 1928. Among the poor, the sick, and the children — he sought the strength needed to set in motion the immense project that God had placed on his shoulders that day. It was a school of suffering where his soul would be tempered to its mission.

He would later teach his spiritual sons, who were called to holy orders, that they had to be priests one-hundred-percent, priestly priests, priests at the service of souls. “To serve is the greatest joy that a soul can experience, and this is what we priests must do. Day and night at the service of all — otherwise, we are not priests. A priest should love the young and the old, the poor and the rich, the sick and the children. He should prepare himself well to celebrate Mass. He should welcome and take care of souls one by one, like a shepherd who knows his flock and calls each sheep by name. We priests do not have rights. I like to think of myself as a servant of all, and in this title I take pride.”

While he gave himself to that tireless ministry of charity, his soul seemed to glimpse the approach of light from God. Seized with an overflowing zeal, he shouted or at times sang out the aspiration spoken by Jesus himself: Ignem veni mittere in terram, et quid volo nisi ut accendatur? (“I have come to cast fire on the earth; what will I but that it be kindled!”).