The first meeting between Tomás Alvira and the Founder of Opus Dei took place during a very difficult time, as the civil war had broken out little more than a year before. It occurred in Madrid, in the midst of a religious persecution that had already produced many martyrs. Tomás used to go to the house of an old friend from the Chemistry Faculty of Saragossa, Josémaría Albareda. 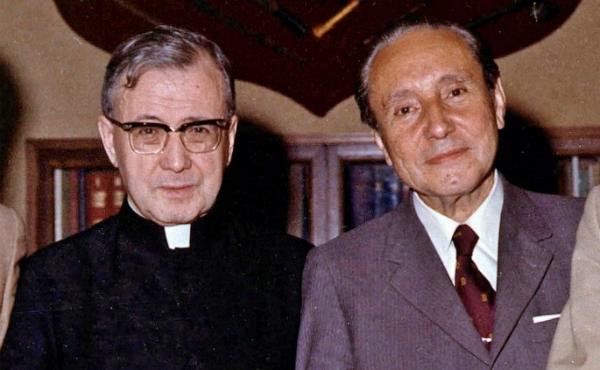 José Maria, who was not yet a member of Opus Dei, but had frequented the DYA Residence, spoke to him about the Founder of the Work and introduced him to one of the first members, Isidoro Zorzano, who was an Argentinian citizen and therefore relatively free to move around. All the other members, including, Saint Josemaría, were in hiding, as their lives were in constant danger.

It was in this atmosphere that Tomás met the Founder of Opus Dei for the first time. He recorded that meeting after the death of Saint Josemaría. “One day (I can’t remember whether it was the 31st of August or the 1st of September) I was working in the afternoon with Josémaría Albareda when he was called away to meet someone. He went out, and returned shortly afterwards accompanied by the person who had come to see him. It was Father Josémaría. He was wearing a grey overall and was very thin. He was 35 years old at the time. Josémaría introduced us. It was the moment of my meeting with the Founder of Opus Dei who was to be of extraordinary importance for my life. (Saint Josemaría had just left the Legation of the Honduran Embassy. Paseo de la Castellana, 51, where he had been in hiding for the last six months).

The strong personality of that young priest, the supernatural outlook of everything he said, his optimism not easy to have under such difficult circumstances, his admirable sincerity, his warmth… deeply impressed me. He stayed talking with us for about a quarter of an hour, during which he never mentioned anything about the war or politics, and after a while he said ‘I’m going’. I never could explain why I said: ‘I’m going too’. It wasn’t my time to leave, and yet I said I was going, heedless of the danger of walking out into the street with a priest who could be recognized at any time. Once outside he asked me: ‘Where are you going?’ I replied: ‘Wherever you are going’. He took me by the arm and we walked along the streets Menéndez Pelayo, Alcalá and Serrano, to Ayala 67 (now 73). Along the way – we walked slowly - he asked me about my life.”

In 1992, years after writing the above, and only a few days before his own death, Tomás once again set down in writing some impressions of that first meeting: “When we got to the street, our Father asked me: ‘Where are you going? ’‘Wherever you are going.’ He took me by the arm and as we were walking along the way to Ayala 67 he asked me questions. At the door, he asked: ‘Would you like us to meet again?’ I answered ‘yes’. ‘Well, come tomorrow, you can have confession and we’ll continue meeting’. After that…a convincing call.”

Perhaps this last sentence best contains the intensity of his memories. The first meeting with Saint Josemaría meant the discovery of his vocation to Opus Dei. Although for juridical reasons Tomás could not ask for admission to the Work as a Supernumerary until 15th February 1947, this memo bears witness to the fact that already on that 31stAugust 1937, while opening his heart to Saint Josemaría and listening to the words of the Founder, he clearly heard the call of God: “a convincing call”.

(*) The first quoted texts are from memories of Tomás Alvira written after Saint Josemaría’s death. The last one was, shortly before his own death in 1992.