"No cancer. No blood transfusion."

Testimony of Rey C. Plata from Marikina City (Philippines) on his wife's cure attributed to the intercession of Tomas and Paquita Alvira. 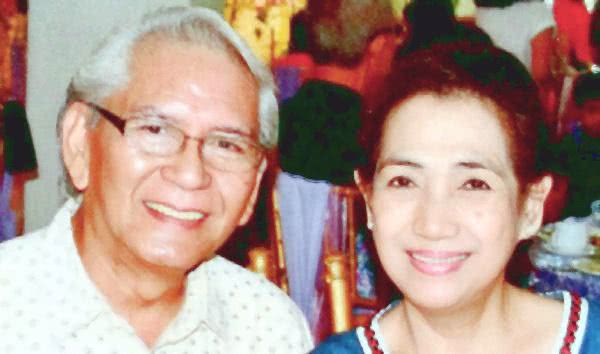 In March 2018, my wife, Sosie, saw her gastroenterologist, complaining of recurring acid reflux. A CT scan of her abdomen showed nothing remarkable, but revealed an anomaly on the right kidney needing immediate attention.

A Battery of Tests

Earlier, in 2017, Sosie had undergone three Extracorporeal Shockwave Lithotripsy (ESWL) procedures to remove a calcium stone leading to her right kidney. The blockage, however, remained. In October that year, the urologist did a cystoscopy to remove the stone particles.

The urologist was certain that no trace of the calcium stone remained. But here again, in March, the scan showed a blockage. He suspected that there was something wrong with Sosie’s right kidney. In fact, tests showed that its function was down to 11%, just one per cent above what is considered kidney failure.

Early in the morning of Wednesday, May 2, Sosie was again in the operating room for another cystoscopy. I was told that she would be back in her room by midday. At 7:30 a.m. the doctor called to tell me that he had to abort the procedure. The ureteral blockage was so solid that the cystoscopy instrument could not breach it.

The kidney function test performed the next day showed an even lower result of 10.4%. Another scenario was thus unveiled, that of removing Sosie’s weakening right kidney, whether or not there was cancer, as doing so later on in life would be more complicated.

Through the Intercession of the Alvira Couple

After serious evaluation, much reflection, and prayers, Sosie and I gave our consent. I was asked to sign a number of waivers, including one for possible blood transfusion should there be massive loss of blood from the surgical removal of her right kidney. Sosie was most concerned about the blood transfusion and realized the gravity of the situation.

For all these, I prayed and left everything in the hands of God, through the intercession of our Lady, St. Joseph, Blessed Alvaro Del Portillo and St. Josemaria Escriva. Likewise, Sosie prayed and asked other people to do so. She intimated to me that one of her requests was for me to have the strength to accept the outcome, whatever it be.

The operation was scheduled for Saturday, May 5, at 10 a.m. Come Saturday morning, there was a delay.

Sitting beside Sosie on the couch of the hospital room, I watched her praying a last-minute novena, reciting nine times the prayer card of Tomas and Paquita Alvira. I must admit that I had only prayed to the Alvira couple once or twice before as I did not know much about them.

Sosie told me that a few days before her hospitalization, she decided to entrust specifically to the Alvira couple the resolution of her medical condition. She had been praying two or three novenas a day, asking them to intercede for her intentions. She took advantage of the delay that Saturday morning to pray yet another set. Her sister Angie assured her that she would likewise be praying to the Alviras and that she had asked her friends to do the same.

It was 11 a.m. when Sosie was wheeled into the operating room. The doctor said that the procedure would take time. Everything would be over by late afternoon.

I was alone waiting in the hospital room when the phone rang. My heart jumped. It was 12:20 p.m., less than an hour and a half after the operation began. It was the doctor, asking to see me.

Calming my nerves as best as I could, I hurried down to the operating section to meet him. Still wearing his surgical head gear and mask, the doctor broke the news: "Mr. Plata, last night I prayed and asked the whole family to pray for me because I was in a dilemma. I had second thoughts about removing the kidney. I decided not to open her up."

I waited with bated breath for the bombshell. What could this mean? Another postponement? What was Sosie’s condition? What added expense would it entail?

"Mr. Plata,” the doctor continued, “last night I decided that I would repeat the cystoscopy procedure that failed (three days earlier) on May 2. That is what I did this morning. And you know what? I made it! I did not open her up. The stent passed the ureter cleanly and reached all the way to the kidney! NO BLOCK, NO STONE, NO TUMOR, NO MASS whatsoever!”

For several seconds, all I could do was to stare at him. I couldn't believe it. Then I repeated to him what I thought I heard him say, and he confirmed it: “Opo! (Yes sir!) Okay, thank you for coming down here. It's just that I was so happy that I wanted to inform you immediately! You may go back to your room now and rest. Sosie will be there after she recovers from the general anesthesia.” 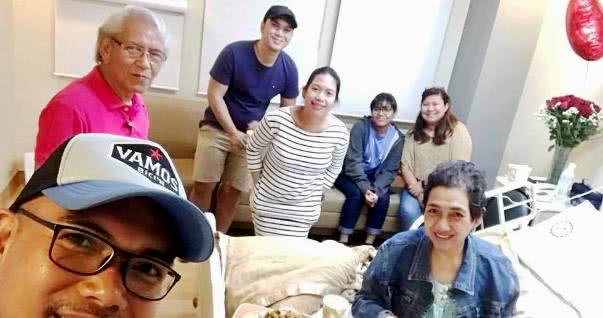 The doctor added that he was optimistic that the function of Sosie’s right kidney would improve with time, now that there was no more blockage to cause any pressure build-up. He took a tissue sample and sent it for biopsy.

The following morning, the doctor visited Sosie in her room. He said that the chain of events was unexplainable. Because of that, he was willing to submit documentary evidence to support the canonization of the Alvira couple.

Sosie, through the Alviras, had petitioned for just two things: 1) That it not be cancer; and 2) That there be no blood transfusion. A week later, after continuing novenas to the Alvira couple, the biopsy result came in: “benign fibro-muscular tissue.” Sosie’s two petitions had been granted, and much more!

Family and friends call it a miracle.

Sosie and I consider it our duty to share with the world this special favor granted to us through the intercession of the Alviras. Out of loving gratitude, I made a translation of the Alvira Couple Prayer Card in Tagalog so that more people may learn about them. I now post it here. 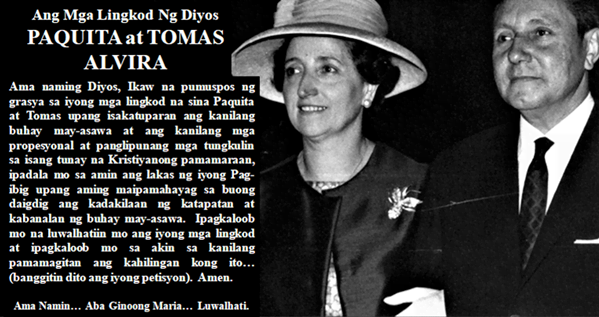