"They shared everything they had"

In his August 21 general audience, Pope Francis continued his catechesis on the Acts of the Apostles, focusing on the topic of solidarity. 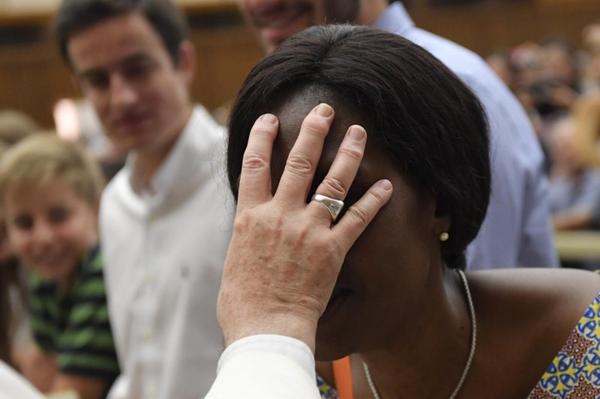 The Christian community was born of the superabundant outpouring of the Holy Spirit, and grows thanks to the leaven of sharing among brothers and sisters in Christ. There is a dynamism of solidarity that builds up the Church as the family of God, central to which is the experience of koinonia. What does it mean, this strange word? It is a Greek word that means “to put in communion”, “to put in common”, to be like a community, not isolated. This is the experience of the first Christian community, that is, putting in common, “sharing”, “communicating, participating”, not isolating oneself. In the Church of the origins, this koinonia, this community refers first and foremost to participation in the Body and Blood of Christ. Therefore, when we take communion we declare “we communicate”, we enter into communion with Jesus, and from this communion with Jesus we reach communion with our brothers and sisters. And this communion with the Body and Blood of Christ, which occurs during Holy Mass, translates into fraternal union, and therefore into what is most difficult for us: pooling goods and gathering money through the collection in support of the mother Church of Jerusalem (cf. Rm 12, 13; 2 Cor 8-9) and the other Churches. If you want to know if you are good Christians you must pray and partake of communion and the sacrament of reconciliation. But that sign that your heart is converted is when conversion reaches your pockets, when it affects your own interest: that is where we see if someone is generous with others, if one helps the weakest and poorest. When conversion arrives there, you can be sure it is a true conversion. If it remains limited to words, it is not a good conversion.

Eucharistic life, prayers, the preaching of the apostles and the experience of communion (cf. Acts 2: 42) turn believers into a multitude of people who, the Book of the Acts of the Apostles tells us, are “one in heart and mind”, and do not consider what they possess to be their own property, but rather shared everything they had (cf. Acts 4: 32). It is a powerful model of life that helps us to be generous and not mean. For this reason, “there were no needy persons among them, for”, the Book says, “those who owned land or houses sold them, brought the money from the sales, and put it at the apostles’ feet, and it was distributed to anyone who had need” (Acts 4: 34-35). The Church has always had this gesture of Christians who despoil themselves of the superfluous things they had, the things that were not necessary so as to give them to those who were in need. And not only money: also time. How many Christians – you, for example, here in Italy – how many Christians volunteer! But this is beautiful! It is communion, sharing time with others, to help those who are in need. Volunteering, works of charity, visits to the sick: one must always share with others, and not seek only one’s own interest.

Community or koinonia becomes in this way the new form of relationship between the Lord’s disciples. Christians experience a new way of being among themselves, of behaving. And it is the typically Christian way, to the extent that the pagans looked at the Christians and said, “Look how they love one another!”. Love was the way. But not love expressed in words, not false love: the love of works, of helping each other, tangible love, the tangibility of love. The bond with Christ establishes a bond between brothers which converges in and is expressed also in the communion of material goods. Yes, this way of being together, this love for each other also reaches the pocket, it reaches the point of denuding oneself also of the impediment of money so as to give it to others, going against one’s own interest. Being members of the body of Christ makes believers co-responsible to each other. Being believers in Jesus makes us all co-responsible to each other. “But look at him, the problem he has: it doesn’t matter to me, it is his problem”. No, among Christians we cannot say, “Poor person, he has a problem at home, he is going through this family problem”. But, I must pray, I must take it on board, I am not indifferent”. This is being a Christian. Therefore the strong support the weak (cf. Rom 15: 1) and no-one experiences the poverty that humiliates and disfigures human dignity, because they live this community: having the heart in common. They love each other. This is the sign: tangible love.

James, Peter and John, who are the three apostles like the “pillars” of the Church of Jerusalem, establish in a communal way that Paul and Barnabas will evangelize the pagans whereas they will evangelize the Jews, and they ask only of Paul and Barnabas, as a condition, not to forget the poor, to remember the poor (cf. Gal 2: 9-10). Not only those who are poor materially, but also those who are poor spiritually, people who have problems and need our closeness. A Christian always starts out from himself, from his own heart, and approaches others as Jesus approached us. This is the first Christian community.

A concrete example of sharing and the communion of goods is found in the witness of Barnabas: he owns a field and sells it to donate the proceeds to the apostles (cf. Acts 4: 36-37). But alongside his positive example there is another, sadly negative: Ananias and his wife Sapphira, after selling their land, decide to give only a part to the apostles and to keep the rest for themselves (cf. Acts 5: 12). This fraud breaks the chain of gratuitous sharing, of serene and selfless sharing, and the consequences are tragic, they are fatal (Acts 5: 5.10). The apostle Peter unmasks the impropriety of Ananias and his wife, and says to them, “How is it that Satan has so filled your heart that you have lied to the Holy Spirit and have kept for yourself some of the money you received for the land’ … You have not lied just to human beings but to God” (Acts, 5: 3-4). We could say that Ananias lied to God because of his isolated conscience, a hypocritical conscience, that is, due to an ecclesial participation that is “negotiated”, partial, opportunistic. Hypocrisy is the worst enemy of this Christian community, of this Christian love: pretending to love each other but seeking only one’s own interest.

Lacking the sincerity of sharing, indeed, or lacking in the sincerity of love, means cultivating hypocrisy, distancing oneself from the truth, becoming selfish, extinguishing the fire of communion and turning to the cold of inner death. He who acts in this way passes through the Church like a tourist. There are so many tourists in the Church who are always passing through, but never enter the Church: it is spiritual tourism that makes them believe they are Christians, whereas they are merely tourists in the catacombs. No, we must not be tourists in the Church, but brothers to each other. A life based only on drawing profit and gain from situations at the expense of others inevitably causes inner death. And how many people say they are close to the Church, friends of priests, of bishops, while they seek only their own interests. These are the hypocrisies that destroy the Church!

May the Lord – I ask this for all of us – bestow upon us His Spirit of tenderness, which overcomes every hypocrisy and puts into circulation that truth which nurtures Christian solidarity, which, far from being activity of social assistance, is the inalienable expression of the nature of the Church, tender mother of all, especially the poorest.