Saint Augustine of Hippo (354-430) was born in Tagaste, in northern Africa. Called the “Doctor of Grace,” he is one of the greatest Christian thinkers in the history of the Church. 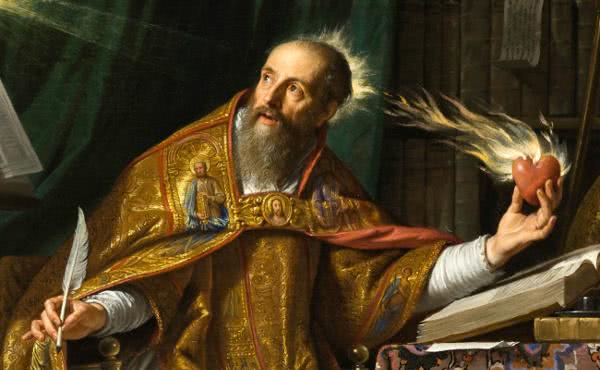 After his conversion and baptism, while teaching rhetoric in Milan, he decided to return to his native land in order to better serve the Church. He was ordained a priest in 391 to help the elderly Bishop of Hippo, whom he succeeded in the episcopal see a short time later. His activity as bishop was in great part aimed at defending the faith against various heresies, especially the Manicheans, Donatists, Pelagians, and Arians.

Saint Augustine had a deep and complex personality. He was a philosopher, theologian, mystic, poet, orator, polemicist, writer, and shepherd. He many qualities complimented one another and made the Bishop of Hippo, as Pius XI wrote, a person “to whom almost no one, or just a few, of all who have lived since the beginning of the human race until today can be compared.”

But Saint Augustine is above all a Shepherd who sees and defines himself as a “servant of Christ and servant of the servants of Christ.” And his life exemplified these words in all their consequences: full availability to the needs of the faithful; the desire to reach salvation only alongside those he shepherded (“I don’t want to be saved without you”); the petition to God to always be ready to die for his flock; love for those in error, even when they had no love for him or mistreated him. In sum, he was a Shepherd in the fullest sense of the word.

Saint Augustine’s preaching was both rich and abundant. Over 500 of his homilies have come down to us, preached in his own voice, including his Commentary on the Psalms (Enarrationes in Psalmos) and on the Gospel of Saint John (In Ioannis Evangelium tractatus), and the Sermones, a title given by scholars to the compilation of 363 individual discourses considered authentic.

For Saint Augustine, who set out his theory of preaching in Book IV of his work De doctrina christiana, the preacher is above all a person with a deep knowledge of Sacred Scripture, who knows how to reach people where they are, moving their minds and hearts. All his preaching is marked by a marvelous grasp and love for the revealed word of God.

His preaching is interwoven with biblical texts often used in the liturgy of northern Africa. The quotes from the Gospel are taken from the Vulgate Latin version, although at times he revises passages when the occasion requires it or when, after consulting the original text, he is not convinced by the existing translation.

The public who listened to his sermons was very diverse. Patricians and slaves, poor and rich, people with a rudimentary education and the learned, good Christians and lax ones and even heretics, all were eager to listen to the great orator. The Bishop of Hippo always tried to present the divine Word clearly and simply, opening up a dialogue of love and faith with his listeners.