"Prayer was the golden thread running through David's life"

In his 24 June General Audience, Pope Francis continued his catechesis on prayer, speaking about "The prayer of David." 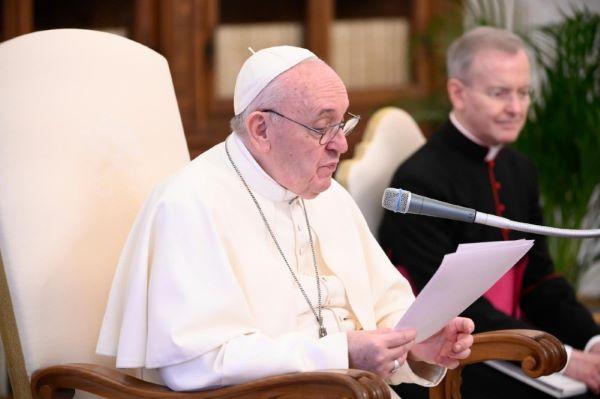 On the itinerary for the catechesis on prayer, today we meet King David. Favoured by God even from his youth, he is chosen for a unique mission that would play a central role in the history of the people of God and in our own faith. In the Gospels, Jesus is called “son of David” a number of times; like him, in fact, He is born in Bethlehem. According to the promises, the Messiah would come from the descendants of David: a King completely after God’s heart, in perfect obedience to the Father, whose action faithfully realises His plan of salvation (see Catechism of the Catholic Church, 2579).

David’s story begins on the hills surrounding Bethlehem, where he grazes the flock of his father, Jesse. He is still a boy, the last of many brothers. So much so that when the prophet Samuel, acting on God’s order, goes in search of the new king, it almost seems that his father has forgotten about his youngest son (see 1 Sam 16:1-13). He worked in the open air: we can think of him as a friend of the wind, of the sounds of nature, of the sun’s rays. He has only one companion to comfort his soul: his harp; and during those long days spent in solitude, he loves to play and to sing to his God. He also played with the slingshot.

David is, therefore, first of all a shepherd: a man who takes care of animals, who defends them from oncoming danger, who provides for their sustenance. When by God’s will David will have to care for his people, the things he will do will not be very different. This is why the image of the shepherd frequently occurs in the Bible. Even Jesus defined Himself as “the good shepherd”, whose behaviour is different than that of the mercenary; He offers His life on behalf of the sheep, He guides them, He knows each one by name (see Jn 10:11-18).

David had learned a lot from his previous job. So, when the prophet Nathan reproves him for his very serious sin (see 2 Sam 12:1-15), David understands right away that he had been a bad shepherd, that he had despoiled another man of his only sheep that he loved, that he was no longer a humble servant, but a man who was crazy for power, a poacher who looted and preyed on others.

A second characteristic trait present in David’s vocation is his poet’s soul. From this small observation, we can deduce that David was not a vulgar man, as is often the case with individuals who are forced to live for long periods in isolation from society. He is, instead, a sensitive person who loves music and singing. His harp would accompany him always: sometimes to raise a hymn of joy to God (see 2 Sam 6:16), other times to express a lament, or to confess his own sin (see Ps 51:3).

The world that presented itself before his eyes was not a silent scene: as things unraveled before his gaze he observed a greater mystery. That is exactly where prayer arises: from the conviction that life is not something that takes us by surprise, but a stupefying mystery that inspires poetry, music, gratitude, praise, even lament and supplication in us. When a person lacks that poetic dimension, let’s say, when poetry is missing, his or her soul limps. Thus, tradition has it that David is the great artist behind the composition of the Psalms. Many of them at the beginning bear an explicit reference to the king of Israel, and to some of the more or less noble events of his life.

David, therefore, has a dream: that of being a good shepherd. Sometimes he will live up that that task, other times less so; what is important, however, in the context of the history of salvation, is that he is a prophecy of another King, whom he merely announces and prefigures.

Look at David, think about David. Holy and sinful, persecuted and persecutor, victim and murderer, which is a contradiction. David was all of this, together. And we too have recorded events in our lives that are often opposed to each other; in the drama of life, all people often sin because of inconsistency. There is one single golden thread running through David’s life, that gave unity to everything that happened: his prayer. That is the voice that was never extinguished. David the saint prays: David the sinner prays; David, persecuted, prays; David the persecutor prays. Even David the murderer prays. This is the golden thread running through his life. A man of prayer. That is the voice that is never silenced. Whether it assumed tones of jubilation or lament, it is always the same prayer, it is only the melody that changes. In so doing, David teaches us to let everything enter into dialogue with God: joy as well as guilt, love as well as suffering, friendship as much as sickness. Everything can become a word spoken to the “You” who always listens to us.

David, who knew solitude, was in reality never alone! In the end, this is the power of prayer in all those who make space for it in their lives. Prayer gives you nobility, and David is noble because he prays. But he is a murderer who prays; he repents and his nobility returns thanks to prayer. Prayer gives us nobility. it is capable of securing their relationship with God who is the true Companion on the journey of every man and woman, in the midst of life’s thousand adversities, good or bad: but always prayer. Thank you, Lord. I am afraid, Lord. Help me, Lord. Forgive me, Lord. David’s trust is so great that, when he was persecuted and had to flee, he did not let anyone defend him: “If my God humiliates me thus, He knows what He is doing”, because the nobility of prayer leaves us in God’s hands. Those hands wounded by love: the only sure hands we have.