Pedro Ballester was a British numerary who died of cancer in January 2018 aged 21. Six months later he was awarded a Masters’ Degree from Manchester University posthumously. On the second anniversary of his death we publish an account of the graduation ceremony written by a friend who attended it. 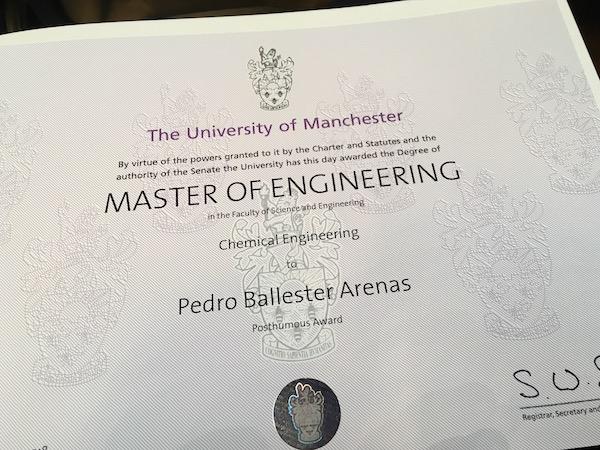 On 17 July 2018, at half past nine in the morning, one of Pedro’s teachers was waiting for us by the entrance to Whitworth Hall of the University of Manchester. She was there to show his family and few of his friends to their places in the front three rows of the auditorium. At ten o’clock on the dot, the teaching staff began their procession, led by the Associate Vice-President of the university. With the proceedings now under way, the Head of the School of Chemical Engineering greeted the teaching staff and the families who had encouraged their sons and daughters in their efforts. Then he addressed the pupils who were about to receive their certificates, encouraging them to bear in mind, over the next stage of their lives that was about to begin, the advice from the famous artist Michelangelo: The greater danger for most of us lies not in setting our aim too high and falling short; but in setting our aim too low, and achieving our mark. Without further ado, he asked the Vice-President to award the degrees that they had aspired to, and as part of this request he mentioned just one student by name, Pedro Ballester, who was to receive posthumously a master’s degree in chemical engineering.

Having finished the introduction, the Head called those graduating one by one; first the three who were to be awarded doctorates, and then Pedro. Pedro’s brother Carlos went up in his place. The Vice-President handed him Pedro’s certificate and the gown, to intense and long applause from everyone there. Then the rest of the pupils were called, one by one, more than two hundred altogether between those being awarded master’s degrees and bachelor’s degrees. The posthumous award of the master’s degree to Pedro was without precedent in the University of Manchester. 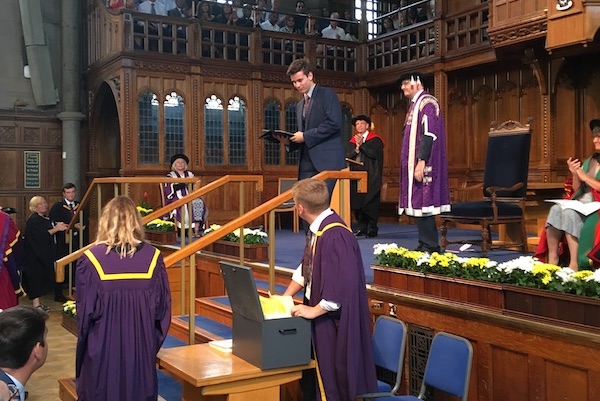 Many things about Pedro have already been published on the Opus Dei website since that 13 January when he died at the age of 21. His father’s work meant that the family lived in various areas, all relatively close to Manchester. These house moves meant that Pedro met a lot of people and it partially explains why so many cards and messages of condolence were sent when he died. On reading them, you can see the positive influence the life of a young Christian student can have, almost from infancy, on many people.

Pedro started his schooling at St Catherine’s Primary School when his family were in Manchester. Then they moved to Harrogate, and later to Huddersfield, where he went to Huddersfield Grammar School, and he finished his schooling in Greenhead College, also in Huddersfield, in 2013-14. When he was at secondary school, despite the distance, Pedro used to travel to Greygarth, a hall of residence run by Opus Dei in Manchester, to attend the means of formation there. He asked to be admitted as a numerary on 1st May 2013, just before his seventeenth birthday.

After finishing his secondary education, Pedro won a place to read Chemical Engineering in Imperial College, considered to be one of the best engineering schools in the UK. Imperial College is in London, so Pedro moved there in September 2014 and started to live in Netherhall House. The residents of Netherhall remember him well. One of them, Karl, wrote:

“I am now a novice at the London Oratory [of St Philip Neri], and I truly believe Pedro played a role in this. While we were living in Netherhall, he invited me to a talk in Kelston. On the way there, he asked me if I had thought about my vocation. I didn’t even know what the word meant! He told me to pray about it. So I did, and continue to pray daily. Moreover, he taught me to pray the Rosary, which I have prayed every day since then.”

He went on to say:

“…as he helped me so much while alive, I continue to trust in his aid and intercession. I had planned to visit him in Manchester in early February, but while this will no longer be possible, I feel closer to him than ever.”

At Imperial, he quickly made friends with his fellow students and even with some of the teachers. When he had to move to Manchester, he stayed in contact with them, and he would try to go and see them between one chemotherapy session and another.

The tutor who interviewed him for the place at Imperial has found the notes he wrote at the time. They read: “The best of the five students I interviewed. Discussed his experience in EMED Tartessus in mines of Rio Tinto. Explained very well about processing copper ore and the use of cyclone for separation. This is the student we are looking for.”

At the end of the first term, Pedro celebrated Christmas in Netherhall. A few days later, he went with his parents to visit his grandfather in Mallorca. There he felt a strong pain and was admitted into hospital where they diagnosed a very advanced bone cancer in the pelvis. On returning to England, the hospital where his father works recommended him to go to the national centre of cancer research in Birmingham, where they confirmed the diagnosis. It was early 2015. Pedro told his mother not to worry, “Jesus rewards with the cross; I have offered him my life through my vocation.”

The treatment began in the Christie Hospital, the biggest cancer treatment centre in Europe, situated in Manchester. He was taken into a specialist unit for young people. Although they knew that his situation had become more serious, the prognosis was not clear. A few months later, he saw that he could not carry on with his studies in London and he applied for a place at Manchester University for September 2015. He was accepted, but the start of term coincided with a change in his condition that meant it was not possible to take up his place. From May to July he underwent treatment in Heidelberg (Germany). Jose Gabriel de la Rica, also a numerary, who had spent many years in Germany and who would also die of cancer shortly after being with Pedro, visited him there. I quote from a letter that Pedro wrote to him:

Your advice has helped me a lot but what most struck me was how happy you seem and how given over you are to God’s plans, with an unbreakable certainty in His infinite goodness.

Yesterday I finished the treatment but there is one test to do before going back to Manchester. Then I will continue with the chemotherapy until 2 October. What luck! I would like to carry on with my degree when it finishes but I doubt that it’s going to be possible this academic year, so I will focus on other things this year. Whatever God wants.

I have finished an important stage of my treatment, but we will continue to pray hard for a cure for both of us. We will know the effects of the radiation within a few months. As our founder said, we are very lucky to receive this caress from Our Lord, and I agree entirely. It was an honour to meet you and there we are, the two of us in the arms of Our Lady.


All the very best!

He did not lose hope and he applied for a place for September 2016: not only did they give him one, but they also awarded him a scholarship for academic excellence because of the grades he had achieved in his pre-university studies. This new stage in Manchester University was not easy. In October the pain returned; he was limping, and the doctors told him to walk as little as possible. Social services provided him with a special car that he turned into a great apostolic instrument, making new friends by offering his fellow students lifts between the hall of residence, where most of the first years lived, to the School of Engineering about 3 Km away.

At the end of 2016, he began to use crutches. He was able to complete all the work and managed to hand it in, even before the deadlines, although sometimes the pain was so great that he had to dictate the text to one of the residents while he laid down on his back on the floor. Once again, his new fellow students and teachers were struck by his cheerfulness and his interest in his studies.

He would live on for another year but was unable to continue his studies in Manchester beyond that first term in the autumn of 2016. 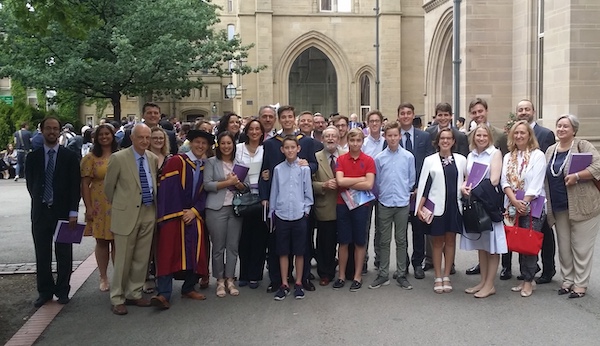 On 6 March 2018, two months after his death, the Head of the School of Chemical Engineering wrote to his parents: "… a number of members of the School were able to pay our condolences at his funeral which was very moving … As a mark of our admiration for Pedro, we have decided to award him a posthumous degree, with your permission. We would very much like to present this to you … either at a small ceremony in the School or during the summer graduation. Please could you let me know if this is something that you feel would be a fitting tribute to him …"