The history of devotion to the martyr Saint Severinus, whose relics repose in the oratory of Saint Joseph in the Prelatic Curia of Opus Dei in Rome. 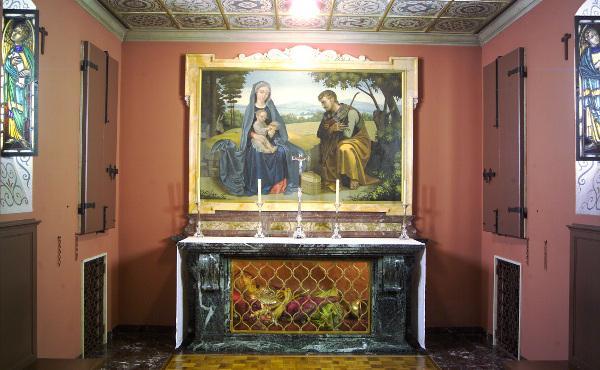 The Oratory of Saint Joseph, in Villa Tevere. The remains of Saint Severinus are preserved under the altar.

In 1957, Cardinal Marcello Mimmi, Archbishop of Naples, gave Saint Josemaría the saint's relics, which had been kept in the sacristy of the Gesù Vecchio church in Naples.

The relics of Saint Severinus had been donated in the mid-nineteenth century by Pope Gregory XVI to the Neapolitan church of Saints Matthew and Francis, from where years later they where transferred to Gesù Vecchio.

Severinus is mentioned in the Roman Martyr­ology of 1930, with his feast on November 8. He is described as a Roman soldier martyred under Diocletian, whose relics were conserved in the Roman catacombs, and who seems to be associated with the four Roman martyrs of the Via Labicana. Devotion to these four martyrs was over time lost, mixed, since the 6th and 7th centuries, with the memory of the holy martyrs of Pannonia (the famous “Crowned Four” of the Monte Celio basilica, close to the Via Labicana). The Pannonia martyrs’ remains were brought to Rome amid the barbarian invasions and veneration for them was widespread in Rome from the end of the 5th and throughout the 6th century. The assimilation of the distinct cults of veneration would explains the name Severinus: it would be the equivalent of Severianus, the name attributed to one of the martyrs of Pannonia (taken in turn, since the 7th century, from one of the members of the other group of “four martyrs,” in this case that of Albano).


The attempt to unravel this confusion in the Martyrology among the “Crowned Four” of Pannonia (who later were found to be five), and the four Roman martyrs of the Via Labicana, and the four martyrs of Albano has given rise to many historical studies and hagiographies since the beginning of the 20th century. Thus it has been possible to reconstruct, with sufficient certainty, the names of the martyrs of Pannonia (those who are today listed in the Martyrology with a feast on November 8) and the martyrs of Albano (whose memorial is celebrated on another day). And it has been confirmed that the record of the four Roman martyrs of the Via Labicana has been lost, which has led to their being removed from the latest edition of the Roman Martyrology. As is known, the successive Roman Martyrologies of the 20th century have undergone changes in order to gradually incorporate the results of historical studies.

It is likely that the martyr St. Severinus whose remains were presented by Gregory XVI to the church of Naples, and which Cardinal Marcello Mimmi gave to Opus Dei in 1957, is one of the holy Roman martyrs of the Via Labicana, whose memorial for centuries was celebrated together with that of the martyrs of Pannonia, on November 8, and whose names are unknown.

In that case, the source for a soldier martyr during the persecution of Diocletian linked to St. Severinus, as well as the date of November 8 as his dies natalis, would need to be situated within the ancient veneration of the four martyrs of the Via Labicana. The name Severinus would come from his association with the Roman veneration for the “Crowned Four,” one of whom, as indicated above, was venerated with the name of Severianus. Over time, however, his cult was all but forgotten in the basilica of Monte Celio dedicated to these martyrs, and in fact was almost non-existent in the 19th century, when Pope Gregory XVI granted the “relics of St. Severinus” to Naples.

If it is shown that the relics do not in fact come from Monte Celio, but that Gregory XVI took them directly from the catacombs, we would need to conclude that the identification of that “Severinus” with the feast of November 8th is purely accidental, and that therefore it is impossible to attribute either a name or a history to him.

From the 17th to the end of 19th century, remains were frequently taken from the catacombs (all of them being considered martyrs) and arbitrarily given a name. The Congregation for Divine Worship and the Discipline of the Sacraments, in insisting on recording November 8th as the day for celebrating St. Severinus, has sought to support his connection with the very ancient tradition of the four martyrs of the Via Labicana, celebrated for centuries on that date. We can only hope that the preceding considerations encourage some historian or liturgist to carry out a deeper and more thorough investigation on this topic and try to clarify it.

(An article by Monsignor Juan Miguel Ferrer published in "Romana 56")