The scene of the "Pietà," with the dead body of Christ resting in Mary’s arms, has often moved Christian hearts.

The death of Jesus occurred about three in the afternoon, the hour when the lambs were sacrificed in the Temple for the Passover meal. The fourth Gospel emphasizes that symbolism right from its opening chapters, when John the Baptist, before a group of his disciples, points to Jesus with these words: Behold the Lamb of God who takes away the sin of the world (Jn 1:29). Mary remains standing with John and the holy women beneath the Cross. Unable to move, her eyes are still fixed on her Son. 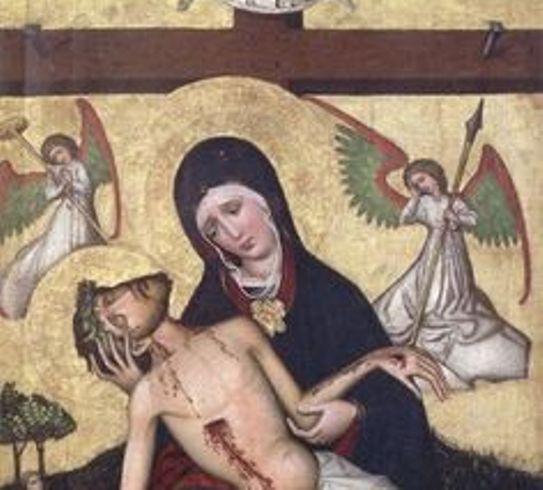 With the setting of the sun, about six in the evening, the Sabbath would begin—that year a most solemn one, since it fell on the Jewish Passover. On such a great feast, the condemned should not be left hanging on the crosses, and so several officials approached Pilate to request that their legs be broken and the bodies taken away (Jn 19-31). The Roman Procurator sent soldiers to perform that painful assignment. We can imagine Mary's apprehension on seeing soldiers arrive at Calvary, armed with hammers and lances. St. John describes the scene: They broke the legs of the first and then of the other who had been crucified with him. But when they came to Jesus, seeing that he had already died, they did not break his legs, but one of the soldiers opened his side with a lance. And immediately blood and water flowed out (Jn 19:32-34).

The lance pierced the heart of Jesus, already dead, and also Mary's soul, in fulfillment of Simeon's prophecy: a sword will pierce your soul (Lk 2:35). St. John, an eye-witness, saw in this event the fulfillment of other prophecies, especially the one that refers to the paschal lamb: You shall not break even one of its bones (Jn 19:36; Ex 12:46). And another Scripture passage says: They shall look upon him whom they have pierced (Jn 19:37; Zach 12:10).

Christian piety has paused at this passage in the Gospel to contemplate with sorrowful recollection the figure of Mary with her dead Son in her arms.

With time pressing, Joseph of Arimathea and Nicodemus, God-fearing members of the Sanhedrin and secret disciples of Jesus, came before Pilate daring to ask him to hand the Lord's body over to them. Once he was assured that Jesus was dead, Pilate granted their petition. Then Joseph returned to the Cross accompanied by several servants bringing ladders so as to lower the body, along with wrappings and a large cloth. Nicodemus also brought a mixture of myrrh and aloes weighing a hundred pounds (Jn 19:39)—an enormous amount, worthy of a king's burial. They took the body of Jesus down and wrapped it in the cloth with the spices, according to the Jewish manner of burial (Jn 19:40).

Christian piety has paused at this passage in the Gospel to contemplate with sorrowful recollection the figure of Mary with her dead Son in her arms. This is the celebrated scene of the Pietà , immortalized in art by innumerable painters and sculptors. Perhaps it was at that moment, while beholding the martyred body of Christ, after its preliminary cleansing, when our Lady and the women chanted their lamentations, as was habitual among the peoples of the Middle East in those days, and even now is frequently done in many places. The Gospel gives few details, but ancient documents help to supply them. In tones similar to the lamentations of St. Ephrem in the fourth century, for example, Mary would have given expression to her immense sorrow while at the same time totally accepting the divine will.

Finally, the body of Jesus was taken a few paces from Calvary to property owned by Joseph of Arimathea. There was a garden with a new tomb that had not yet been occupied. As it was the Eve of the Passover of the Jews, and the tomb was close by, the body of Jesus was laid there (Jn 19:41-42). Joseph had a large stone rolled across the entrance to the tomb and departed (Mt 27:60). That great and solemn Sabbath was about to begin. The following day, in spite of the feast, an embassy from the high priests and Pharisees approached Pilate to request a guard of soldiers, and he consented. To make certain that the grave remained sealed the guard was posted there (Mt 27:66).

Faith in Jesus Christ, the Messiah and Son of God, was seemingly extinguished from the face of the earth. But it shone brightly in the heart of his Mother, who had not forgotten her Son's promise: I will rise again on the third day (Mt 27:63).