"Everything that bears God's 'signature' is destined to last"

In his 18 September General Audience address, Pope Francis continued his catechesis on the Acts of the Apostles, speaking about the words: “You will only find yourselves fighting against God” (Acts 5:39). 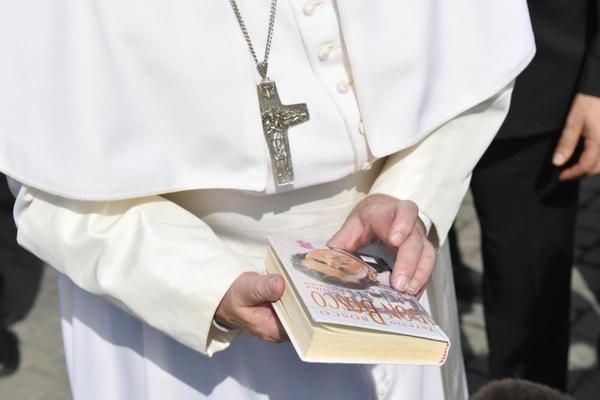 Let us continue our catechesis on the Acts of the Apostles. Faced with the prohibition of the Jews to teach in Christ’s name, Peter and the Apostles respond with courage that they cannot obey those who wish to stop the Gospel’s journey in the world.

The Twelve thus show that they possess that “obedience of faith” which they will then wish to stir up in all men (cf. Rom 1:5). Since Pentecost, in fact, they are no longer men who are “alone”. They experience that special synergy which makes them shift their focus from themselves, and makes them say: “we … and the Holy Spirit” (Acts 5: 32) or “the Holy Spirit and us”. (At 15.28). They feel that they cannot say “I” alone, they are men who are not wrapped up in themselves. Strengthened by this covenant, the Apostles do not let themselves be intimidated by anyone. They had an impressive courage! We think that these were cowards: they all fled, they fled when Jesus was arrested. But, from being cowards, they became so brave. Why? Because the Holy Spirit was with them. The same happens to us: if we have the Holy Spirit within us, we will have the courage to go ahead, the courage to win so many struggles, not for ourselves but for the Spirit who is with us. They do not retreat on their path as intrepid witnesses of the Risen Jesus, like the martyrs of all times, including ours. The martyrs give their lives, they do not hide the fact that they are Christians. Think, a few years ago – even today there are many – but let us think, four years ago, those Coptic Orthodox Christians, true workers, on the beach of Libya: all of them were slaughtered. But the last word they said was “Jesus, Jesus”. They did not sell out their faith, because the Holy Spirit was with them. These are today’s martyrs!

The Apostles are the “megaphones” of the Holy Spirit, sent by the Risen One to spread promptly and without hesitation the Word that gives salvation.

And indeed, this determination makes the Jewish “religious system” tremble – it feels threatened and responds with violence and death sentences. The persecution of Christians is always the same: people who do not want Christianity feel threatened and thus bring death to Christians. But, in the midst of the Sanhedrin, a different voice rose up, that of a Pharisee who chooses to stem the reaction of his own: his name was Gamaliel, a prudent man, “doctor of the Law, esteemed by all the people”. At his school Saint Paul learned to observe “the Law of the Fathers” (cf. Acts 22: 3). Gamaliel takes the floor and shows his brothers how to practice the art of discernment in the face of situations that go beyond the usual frameworks.

He shows, citing some people who had passed themselves off as the Messiah, that every human project can first be approved and then shipwrecked, while everything that comes from above and bears God’s “signature” is destined to last. Human projects always fail; they have a time limit, like we do. Think of so many political projects, and how they change from one side to the other, in all countries. Think of the great empires, think of the dictatorships of the last century: they believed they were very powerful, they thought they dominated the world. And then they all collapsed. Think also today of today's empires: they will collapse, if God is not with them, because the strength that men have in themselves is not enduring. Only God’s strength lasts. Think of the history of Christians, and also of the history of the Church, with so many sins, with so many scandals, with so many bad things in these two millennia. And why has it not collapsed? Because God is there. We are sinners, and we also often cause scandal. But God is with us. And God first saves us, and then them; but He always saves, the Lord. The strength is “God with us”. Gamaliel demonstrates, citing some people who had passed themselves off as Messiahs, that every human project can first receive approval and then be shipwrecked. Therefore Gamaliel concludes that, if the disciples of Jesus of Nazareth believed in an impostor, they are destined to disappear into thin air; if instead they follow someone who comes from God, it is better to give up fighting them; and he warns: “You will only find yourselves fighting against God” (Acts 5: 39). He teaches us to make this discernment.

They are calm and far-sighted words, which allow us to see the Christian event in a new light and offer criteria that “know the Gospel”, since they invite us to recognize the tree by its fruits (cf. Mt 7:16). They touch hearts and achieve the desired effect: the other members of the Sanhedrin follow his advice and renounce their intentions of death, that is, to kill the Apostles.

Let us ask the Holy Spirit to act in us so that, both personally and in community, we may acquire the habitus of discernment. Let us ask Him to always be able to see the unity of salvation history through the signs of God’s passage in our time and on the faces of those around us, so that we may learn that time and human faces are messengers of the living God.