Creating Jobs in Nairobi During COVID-19

Amid the ongoing pandemic, the life of the poor in Nairobi has become even more painful. One person recounts what he has tried to do to meet some of their more pressing needs.

Teaching how to make soap

For many people in Nairobi who do not have regular employment, the recent period had been very stressful. Many projects have stalled and construction workers have no work. Those who collect discarded plastic or other items in the street find they have fewer items since people are not working or moving around. Those who live in lower-income areas cannot afford sanitizers or masks.

I came up with the idea of teaching some of these people with no work how to make liquid detergent and sell it cheaply. With an investment of Ksh.4,000, four persons can make the detergent, put it in plastic bottles and sell it to families in the poor sections of the city. With this, they could cover their expenses and have Ksh.1,000 left over to feed their family for a week, or more, if they can make more and sell it.

Over 100 families have now benefitted from this project by getting some food and soap or detergent. It is a sign of hope for many who are surviving on one meal a day if they are lucky.

Besides food, I purchased fifty 20-litre jerry cans of water for fifty families, each getting one, to add to the one or two they already have. I have also bought some water for them. 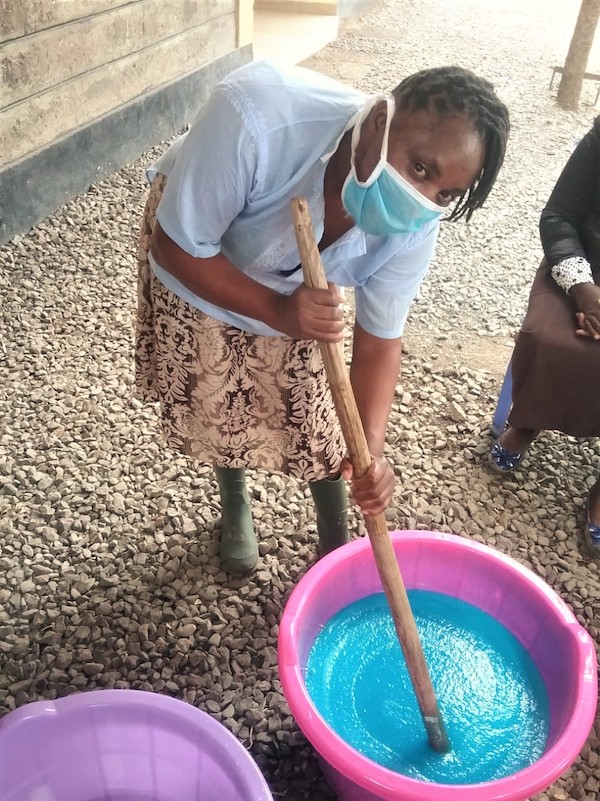 Here in the slum, masks and detergent are not a priority. The biggest pandemic they suffer is hunger. A family may have one or two masks shared by three to seven people. They wear masks only when they are going to areas where the police may be doing patrols.

Some are losing their loved ones for different causes: sickness, depression and suicide. I have seen two cases of suicide, two cases of sickness and one case of depression.

Burial costs are a nightmare.

We now have five groups at the "base" doing the soap project, and another five people in Mukuru Kwa Njenga: three engaged in soap making, one selling onions, and one selling Githeri (a local dish of beans and maize).

(The "base" is where 20 street people live. They collect discarded plastic bottles on the street. Some wash cars. We are teaching them to make liquid soap that they can sell and start a small business. Let's see how it goes...)

Sometimes I visit different stalls in Mukuru and ask about families in need. Recently I was directed to a small “flat” where a final year secondary student was living.

Joe (not his real name) has a curvature of the spine which had got progressively worse. For the past year, he has not been able to get out of bed. His father had to help him with everything.

We managed to get a wheelchair (costing Ksh.10,000). When I brought the wheelchair to the flat, the father of the boy, a casual worker with no fixed employment, began to weep.

With this new device Joe was able to move out of the flat. I spoke to him about the faith. He wanted to be baptized. He began to attend catechism classes in the local parish. He was due to be baptised last Palm Sunday but was taken ill a week before and died. He had the baptism of desire.

His father brought him to the hospital about 10 km away. We discovered that the day he died his father walked the 10km home, not having eaten that day.

We later discovered that his father was HIV+ as was his deceased mother and his stepmother.

It was nice to bring a bit of sunshine into the life of this poor family. The family has now given the wheelchair to another needy family in the area. 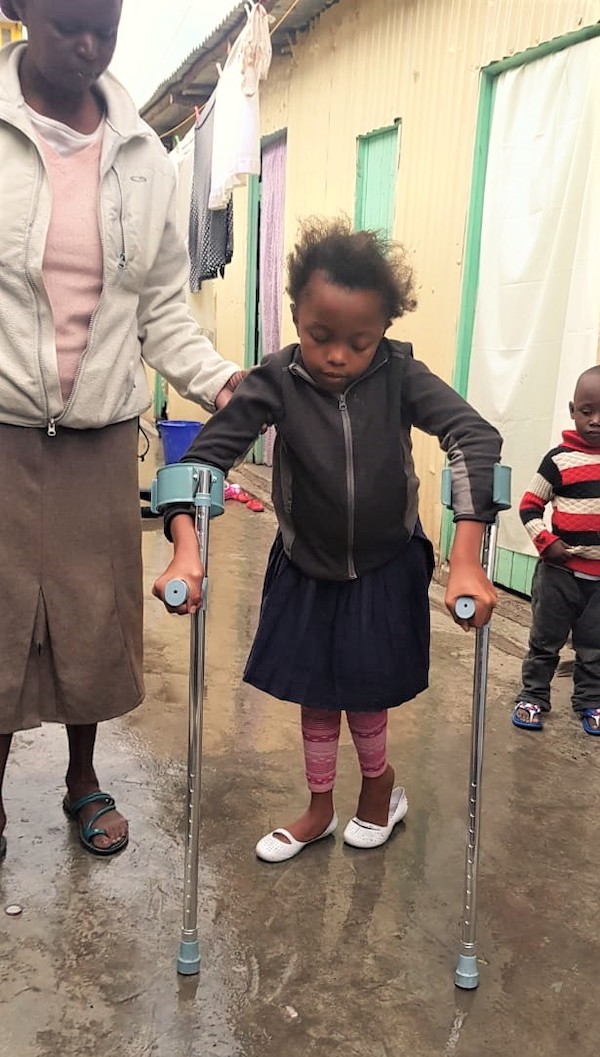 I discovered a girl in the same area who has been disabled since she was 3; she is now 11. For a number of years she had not been able to walk at all and so could not go outside her tiny home in a lower-income area of Nairobi called Mukuru. We managed to get her a pair of crutches (Ksh.4,000) and now she can move about. We are still trying to find out the cause of her disability.

While encouraged with what we have been able to achieve, we are preparing and praying for all the challenges that the next few months will bring to our city. 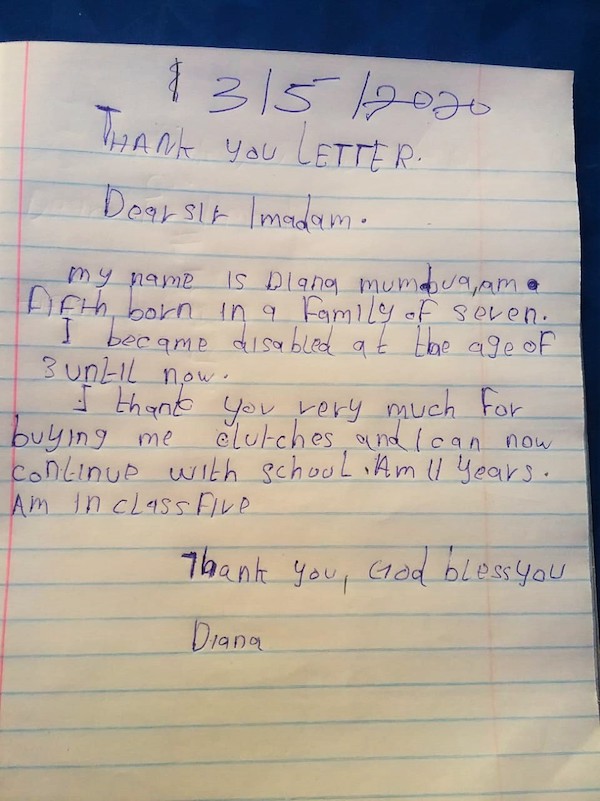