Commentary on the Gospel: "The Paraclete"

Gospel for the 6th Sunday of Easter (Cycle A), with commentary. 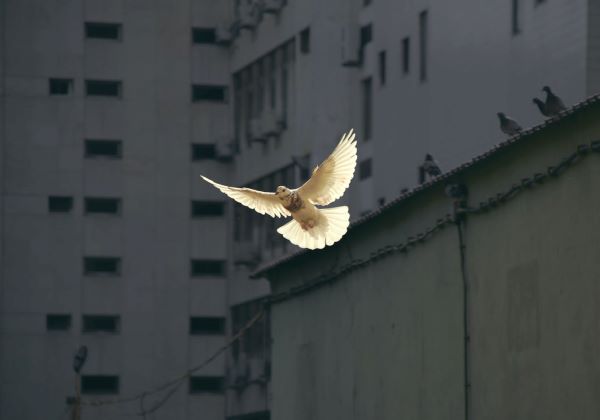 “If you love me, you will keep my commandments. And I will ask the Father, and he will give you another Counselor, to be with you for ever, even the Spirit of truth, whom the world cannot receive, because it neither sees him nor knows him; you know him, for he dwells with you, and will be in you. I will not leave you desolate; I will come to you. Yet a little while, and the world will see me no more, but you will see me; because I live, you will live also. In that day you will know that I am in my Father, and you in me, and I in you. He who has my commandments and keeps them, he it is who loves me; and he who loves me will be loved by my Father, and I will love him and manifest myself to him.”


These words introduce us into the intimate atmosphere in which Jesus opened his heart to the Apostles during the Last Supper.

He begins with some clear and demanding words: “If you love me, you will keep my commandments.” God’s commands are not capricious, arbitrary expressions of his authority. Rather they are an expression of the Love of a good Father teaching his children the true path to happiness. But this doesn’t mean that following them doesn’t require effort. Saint John Paul II said: “In the discussions about new and complex moral problems, it can seem that Christian morality is in itself too demanding, difficult to understand and almost impossible to practise. This is untrue, since Christian morality consists, in the simplicity of the Gospel, in following Jesus Christ, in abandoning oneself to him, in letting oneself be transformed by his grace and renewed by his mercy, gifts which come to us in the living communion of his Church …. By the light of the Holy Spirit, the living essence of Christian morality can be understood by everyone, even the least learned, but particularly those who are able to preserve an ‘undivided heart’ (Ps 86:11). On the other hand, this evangelical simplicity does not exempt one from facing reality in its complexity; rather it can lead to a more genuine understanding of reality, inasmuch as following Christ will gradually bring out the distinctive character of authentic Christian morality, while providing the vital energy needed to carry it out … The one who loves Christ keeps his commandments.”[1]

Jesus is well aware of the effort required to keep his commandments, but He assures us that we can rely on an invaluable help: “I will ask the Father, and he will give you another Counselor, to be with you for ever” (v. 16). The word parakletós in the Greek text (which is translated here as Counselor) means a person who is called upon for help: a consoler, defender or advocate; someone invited to journey alongside us, to accompany us, point out the obstacles, defend us, while speaking to us softly, comforting us, offering suggestions, encouraging us… The “Paraclete” is a faithful and inseparable companion.

Jesus Himself will always be at our side as our “Paraclete,” as he promises his disciples: “I will not leave you desolate; I will come to you” (v. 18). But He also promises that his Father will send “another Paraclete” who will be with them forever: the Spirit of truth, the Holy Spirit (v. 16). As Benedict XVI said: “The first Paraclete is in fact the Incarnate Son who came to defend man from the accuser by antonomasia, who is Satan. At the moment when Christ, his mission fulfilled, returns to the Father, he sends the Spirit as Defender and Consoler to remain with believers for ever, dwelling within them. Thus, through the mediation of the Son and of the Holy Spirit, an intimate relationship of reciprocity is established between God the Father and the disciples … However, all this depends on one condition which Christ imposes clearly at the beginning: ‘If you love me’ (Jn 14: 15), and which he repeats at the end: ‘He who obeys the commandments he has from me is the man who loves me; and he who loves me will be loved by my Father. I too will love him and reveal myself to him’ (Jn 14: 21).”[2]

Pope Francis says that “by meditating on these words of Jesus, we perceive with the sense of faith that we are the People of God in communion with the Father and with Jesus through the Holy Spirit … The Lord today calls us to respond generously to the Gospel’s call to love, placing God at the center of our lives and dedicating ourselves to the service of our brothers and sisters, especially those most in need of support and consolation.”[3]