"The Holy Spirit is the protagonist of the Church's mission"

In his October 30 general audience, Pope Francis continued speaking about the Acts of the Apostles, focusing on the text “Come over to Macedonia and help us” (Acts 16:9). 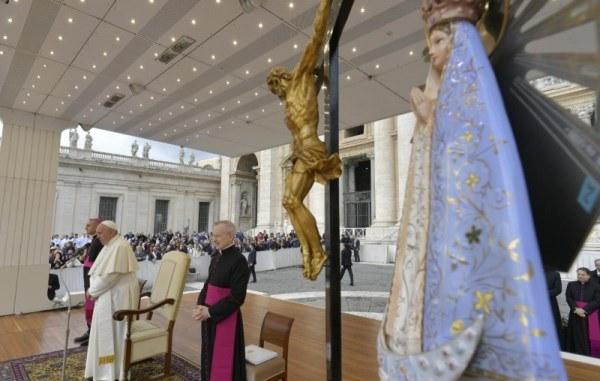 Reading the Acts of the Apostles, we see how the Holy Spirit is the protagonist of the Church's mission: it is He Who guides the path of the evangelizers, showing them the way to follow. We see this clearly in the moment in which the apostle Paul, arriving in Troas, has a vision. A Macedonian begs him: “Come over to Macedonia and help us” (Acts 16:9). The people of North Macedonia are proud of this, they are very proud of having called to Paul, since it was Paul who proclaimed Jesus Christ. I remember those good people who welcomed me so warmly: may they conserve this faith that Paul preached to them! The Apostle does not hesitate, and he leaves for Macedonia, sure that it is God Himself Who sends him, and arrives in Philippi, “a Roman colony” (Acts 16: 22) on the Via Egnatia, to preach the Gospel. Paul stays there for several days. Three events characterize his stay in Philippi, in these three days: three important events. 1) the evangelization and baptism of Lydia and her family; 2) the arrest he experiences, along with Silas, after exorcising a slave exploited by his masters; and 3) the conversion and baptism of his jailer and his family. Let us look at these three episodes in the life of Paul.

The power of the Gospel is addressed, first and foremost, to the women of Philippi, in particular to Lydia, a seller of purple cloth, from the city of Thyatira, a believer in God whose heart the Lord opens “to pay attention to what was said by Paul” (Acts 16: 14). Indeed, Lydia welcomes Christ by receiving baptism together with her family, and she welcomes those who are of Christ, hosting Paul and Silas in her house. Here we have the testimony of the arrival of Christianity in Europe: the beginning of a process of inculturation that continues to this day. It entered via Macedonia.

After the warmth experienced in Lydia’s house, Paul and Silas then find themselves having to deal with the harshness of the prison: they go from the consolation of this conversion of Lydia and her family, to the desolation of the prison, where they are discarded for having freed in the name of Jesus “a slave girl who had a spirit of divination” and “brought her owners much gain by fortune-telling” (Acts 16: 16). Her masters made a lot of money and this poor slave did what the soothsayers do: she would guess your future, she would read your hands – as the song says, “Take this hand, gypsy”, and that is why people paid. Even today, dear brothers and sisters, there are people who pay for this. I remember in my diocese, in a very large park, there were more than 60 tables where seated there were the soothsayers, who read your hand, and people believed these things! And they paid. And this also happened in Saint Paul’s time. The masters, in retaliation, denounce Paul and lead the Apostles before the magistrates on charges of public disorder.

But what happens? Paul is in prison yet during his imprisonment something surprising happens. He is in desolation, but instead of complaining, Paul and Silas sing praise to God and this praise releases a power that frees them: during prayer an earthquake shakes the foundations of the prison, the doors open and the chains fall from all those present (cf. Acts 16: 25-26). Like the prayer of Pentecost, the prayer in prison also has prodigious effects.

The jailer, believing that the prisoners had fled, was about to kill himself, because the jailers would pay with their own lives if a prisoner escaped; but Paul cried out to him: “We are all here!” (Acts 16: 27-28). The jailer then asked: “What must I do to be saved?” (v. 30). The answer is: “Believe in the Lord Jesus, and you will be saved, you and your household” (v. 31). At this point the change happens: in the middle of the night, the jailer listens to the word of the Lord with his family, welcomes the apostles, cleanses their wounds – because they had been beaten – and with his family he receives Baptism; then “he rejoiced along with his entire household that he had believed in God” (v. 34), prepares the table, and invites Paul and Silas to stay with them: the moment of consolation! In the heart of the night of this anonymous jailer, the light of Christ shines and defeats darkness: the chains of the heart fall and a joy never experienced in him and his family blossoms. Thus the Holy Spirit carries out the mission: from the beginning, from Pentecost onwards, He is the protagonist of the mission. And it carries us forward, we need to be faithful to the vocation that the Spirit moves us to do. To bring the Gospel.