"The God of Abraham becomes 'my God'"

In his 3 June General Audience, Pope Francis continued his catechesis on prayer, focusing on the topic "The prayer of Abraham." 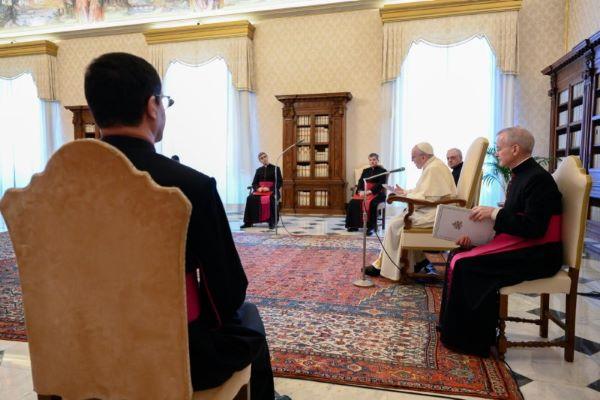 There is a voice that resounds unexpectedly in the life of Abraham. A voice that invites him to set out on a path that sounds absurd: a voice that spurs him to uproot himself from his homeland, from the roots of his family, to move towards a new future, a different future. And all on the basis of a promise, which can only be trusted. And to trust in a promise is not easy, it takes courage. And Abraham trusted.

The Bible is silent with regard to the past of the first patriarch. Logic would suggest that he worshipped other divinities; perhaps he was a wise man, used to peering at the sky and the stars. The Lord, in fact, promises him that his descendants will be as numerous as the stars that dot the sky.

And Abraham leaves. He hears God’s voice and trusts His word. This is important: he trusts in God’s word. And with this departure a new way of conceiving the relationship with God is born; it is for this reason that the Patriarch Abraham is present in the great Jewish, Christian and Islamic spiritual traditions as the perfect man of God, capable of submitting to Him, even when His will is difficult, or even incomprehensible.

Abraham is therefore the man of the Word. When God speaks, men and women become the receiver of that Word and their life the place where it asks to be incarnated. This is a great novelty in humanity’s religious journey: the life of the believer begins to be conceived of as a vocation, that is, as a calling, as a place where a promise is fulfilled; and he or she moves in the world not so much under the weight of an enigma, but with the strength of that promise, which one day will be fulfilled. And Abraham believed in God’s promise. He believed and he went, without knowing where he was going - so says the Letter to the Hebrews (see 11: 8). But he trusted.

This experience of Abraham is also testified to in one of the most original texts in the history of spirituality: the Memorial of Blaise Pascal. It begins as follows: “God of Abraham, God of Isaac, God of Jacob, not of philosophers and wise men. Certainty, certainty. Sentiment. Joy. Peace. God of Jesus Christ”. This memorial, written on a small parchment, and found after his death stitched inside a philosopher's robe, expresses not an intellectual reflection that a wise man like him might conceive about God, but the living, experienced sense of his presence. Pascal even notes the precise moment in which he felt that reality, having finally encountered it: the evening of November 23, 1654. It is not an abstract God or a cosmic God, no, It is the God of a person, of a calling, the God of Abraham, of Isaac, of Jacob, the God who is certainty, who is sentiment, who is joy.

“Abraham’s prayer is expressed first by deeds: a man of silence, he constructs an altar to the Lord at each stage of his journey” (Catechism of the Catholic Church, 2570). Abraham does not build a temple, but rather scattered the path with stones recalling the passing of God. A surprising God, such as when He visits him in the figure of three guests, whom he and Sarah welcome with care and who announce to them the birth of their son Isaac (see Gen 18: 1-15). Abraham was a hundred years old, his wife ninety, more or less. And they believed, they trusted in God. And Sarah, his wife, conceived. At that age! This is the God of Abraham, our God, who accompanies us.

And so Abraham becomes familiar with God, even able to argue with Him, but always faithful. He speaks with God and argues. Up to the supreme test, when God asks him to sacrifice his very own son, Isaac, the old man’s son, his only heir. Here Abraham lives faith like a drama, like walking on tenterhooks in the night, under a sky this time without stars. And very often this happens to us too, to walk in the dark, but with faith. God Himself stops the hand of Abraham when he is about to strike, because He saw that he was truly willing (see Gen 22: 1-19).

Brothers and sisters, let us learn from Abraham, let us learn to pray with faith: listen to the Lord, walk, dialogue to the point of arguing. We must not be afraid of discussing with God! I will also say something that seems to be a heresy. Many times I have heard people say: “You know, this happened to me and I am angry with God”. “Do you have the courage to be angry with God?”. “Yes, I am angry”. “But this is a form of prayer”. Because only a son or daughter is capable of being angry with his or her father and then meeting him again. Let us learn from Abraham to pray with faith, to dialogue, to discuss, but always willing to accept God’s word and put it into practice. With God, we learn to speak like a son to his father: to listen to him, to answer, to argue. But transparent, like a son with his father. This is how Abraham teaches us to pray. Thank you.