"Mary is present in these days of the pandemic"

In his 24 March general audience, Pope Francis continued his catechesis on prayer, speaking about prayer in communion with Mary. 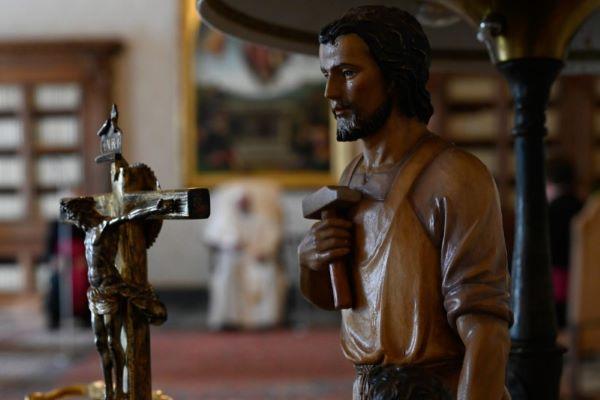 Today the catechesis is dedicated to prayer in communion with Mary. It occurs precisely on the Vigil of the Solemnity of the Annunciation. We know that the main pathway of Christian prayer is the humanity of Jesus. In fact, the confidence typical of Christian prayer would be meaningless if the Word had not become incarnate, giving us in the Spirit His filial relationship with the Father. We heard in the Scripture of the gathering of the disciples, the pious women and Mary, praying after Jesus’s Ascension. The first Christian community was awaiting Jesus’s gift, Jesus’s promise.

Due to Christ’s one mediation, other references Christians find for their prayer and devotion take on meaning, first among them being the Virgin Mary, the Mother of Jesus.

She occupies a privileged place in the lives of Christians, and therefore, in their prayer as well, because she is the Mother of Jesus. The Eastern Churches have often depicted her as the Odigitria, the one who “shows the way”; and the way is her Son, Jesus Christ. The beautiful, ancient painting of the Odigitria in the Cathedral of Bari comes to my mind. It is simple. The Madonna who shows Jesus, naked; then they put a shirt on him to cover his nakedness, but the truth is that Jesus is naked, he himself, man, born of Mary, is the Mediator. And she indicates the Mediator: she is the Odigitria. Her presence is everywhere in Christian iconography, sometimes very prominently, but always in relation to her Son and in connection with Him. Her hands, her eyes, her behavior are a living “catechism”, always indicating the hinge, she always points out the center: Jesus. Mary is completely directed toward Him (see CCC, 2674) to such an extent that we can say she is more disciple than Mother. The directions she gave at the wedding at Cana: “He: do whatever he will tell you”. She always refers to Christ. She is the first disciple.

This is the role Mary fulfilled throughout her entire earthly life and which she forever retains: to be the humble handmaid of the Lord, nothing more. At a certain point in the Gospels she almost seems to disappear; but then she reappears in the more crucial moments, such as at Cana, when her Son, thanks to her caring intervention, performs his first “sign” (see Jn 2:1-12), and then on Golgotha at the foot of the cross.

Jesus extended Mary’s maternity to the entire Church when He entrusted her to his beloved disciple shortly before dying on the cross. From that moment on, we have all been gathered under her mantle, as depicted in certain medieval frescoes or paintings. Even the first Latin antiphon – sub tuum praesidium confugimus, sancta Dei Genitrix: the Madonna who ‘covers’, like a Mother, to whom Jesus entrusted us, all of us; but as a Mother, not as a goddess, not as co-redeemer: as Mother. It is true that Christian piety has always given her beautiful titles, as a child gives his or her mamma: how many beautiful things children say about their mamma whom they love so much! How many beautiful things. But we need to be careful: the things the Church, the Saints, say about her, beautiful things, about Mary, subtract nothing from Christ’s sole Redemption. He is the only Redeemer. They are expressions of love like a child for his or her mamma – some are exaggerated. But love, as we know, always makes us exaggerate things, but out of love.

And so, we began to pray to her using several expressions present in the Gospels directed to her: “full of grace”, “blessed are you among women” (see CCC, 2676 f.). Sanctioned by the Council of Ephesus, the title “Theotokos”, “Mother of God”, was soon added to the Hail Mary. And, analogously as with the Our Father, after the praise we add the supplication: we ask that Mary pray for us sinners, that she might intercede with her tenderness, “now and at the hour of our death”. Now, in the concrete situations of life, and in the final moment, so that she might accompany us – as Mother, as the first disciple – in our passage to eternal life.

Mary is always present at the bedside of her children when they depart this world. If someone is alone and abandoned, she is Mother, she is there, near, as she was next to her Son when everyone else abandoned him.

Mary was and is present in these days of the pandemic, near to the people who, unfortunately, have concluded their earthly journey all alone, without the comfort of or the closeness of their loved ones. Mary is always there next to us, with her maternal tenderness.

Prayers said to her are not in vain. The Woman who said “yes”, who promptly welcomed the Angel’s invitation, also responds to our supplications, she hears our voices, even those that remain closed in our hearts that haven’t the strength to be uttered but which God knows better that we ourselves do. She listens as Mother. Just like, and more than, every good mother, Mary defends us from danger, she is concerned about us even when we are concentrated on our own things and lose a sense of the way, and when we put not only our health in danger, but also our salvation. Mary is there, praying for us, praying for those who do not pray. To pray with us. Why? Because she is our Mother.