In his 10 June General Audience, Pope Francis continued his catechesis on prayer, focusing on the figure of Jacob in the Old Testament. 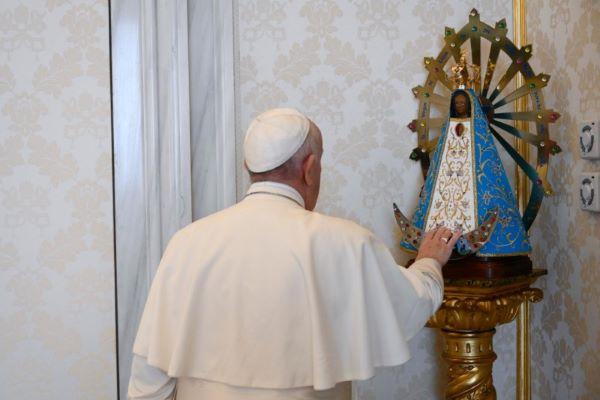 Let us continue with our catechesis on the subject of prayer. The Book of Genesis, through the occurrences of men and women of a far off time, tells us stories that we can reflect on in our own lives. In the Patriarch Cycle, we also find that of a man who shrewdly developed his best talent: Jacob. The biblical account tells us about the difficult relationship Jacob had with his brother Esau. Ever since childhood, there was a rivalry between them, which was never overcome later on. Jacob is the second-born -- they were twins -- but through trickery he manages to obtain the blessing and birthright of their father Isaac (cf. Gen 25:19-34). It is only the first in a long series of ploys of which this unscrupulous man is capable. Even the name “Jacob” means someone who is cunning in his movements.

Forced to flee far from his brother, he seems to succeed in every undertaking in his life. He is adept at business: he greatly enriches himself, becoming the owner of an enormous flock. With tenacity and patience he manages to marry Laban's most beautiful daughter, with whom he is truly in love. Jacob – as we would say in modern terms – is a “self-made” man; with his ingenuity, his cunning, he manages to obtain everything he wants. But he lacks something. He lacks a living relationship with his own roots.

And one day he hears the call of home, of his ancient homeland, where his brother Esau, with whom he has always had a terrible relationship, still lives. Jacob sets out, undertaking a long journey with a caravan of many people and animals, until he reaches the final step, the Jabbok stream. Here the Book of Genesis offers us a memorable page (cf. 32:23-33). It describes how the patriarch, after having all of his people and all the livestock (and they were many) cross the stream, remains alone on the bank of the river on the foreign side. And he ponders: What awaits him the following day? What attitude will his brother Esau, from whom he stole his birthright, assume? Jacob's mind is a whirlwind of thoughts.... And, as it is getting dark, suddenly a stranger grabs him and begins to wrestle with him. The Catechism explains: “the spiritual tradition of the Church has retained the symbol of prayer as a battle of faith and as the triumph of perseverance” (CCC, 2573).

Jacob wrestles the entire night, never letting go of his adversary. In the end he is beaten, his sciatic nerve is struck by his opponent, and thereafter he will walk with a limp for the rest of his life. That mysterious wrestler asks the patriarch for his name and tells him: “Your name shall no more be called Jacob, but Israel, for you have striven with God and with men, and have prevailed” (Gen 32:28). As if to say: you will never be the man who walks this way, straight. He changes his name, he changes his life, he changes his attitude. You will be called Israel. Then Jacob also asks the other: “Tell me, I pray, your name”. The other does not reveal it to him, but blesses him instead. Then Jacob understands he has encountered God “face to face” (vv. 29-30).

Wrestling with God: a metaphor for prayer. Other times Jacob has shown himself able to dialogue with God, to sense Him as a friendly and close presence. But that night, through a lengthy struggle that nearly makes him succumb, the patriarch emerges changed. A change of name, a change in his way of life and a personality change: he comes out of it a changed man. For once he is no longer master of the situation (his cunning is no use to him), he is no longer a strategic and calculating man. God returns him to his truth as a mortal man who trembles and fears, because in the struggle, Jacob was afraid. For once Jacob has only his frailty and powerlessness, and also his sins, to present to God. And it is this Jacob who receives God's blessing, with which he limps into the promised land: vulnerable and wounded, but with a new heart. Once I heard an elderly man - a good man, a good Christian, but a sinner who had great trust in God - who said: “God will help me; He will not leave me alone. I will enter Heaven; limping, but I will enter”. First he was a self-assured man; he trusted in his own shrewdness. He was a man impervious to grace, immune to mercy; he did not know what mercy was. “Here I am, I am in command!”. He did not think he was in need of mercy. But God saved what had been lost. He made him understand that he was limited, that he was a sinner who was in need of mercy, and He saved him.

We all have an appointment during the night with God, in the night of our life, in the many nights of our life: dark moments, moments of sin, moments of disorientation. And there we have an appointment with God, always. He will surprise us at the moment we least expect, when we find ourselves truly alone. That same night, struggling against the unknown, we will realize that we are only poor men and women (“poor things”, I dare say), but right then, in that moment in which we feel we are “poor things”, we need not fear: because God will give us a new name, which contains the meaning of our entire life; He will change our heart and He will offer us the blessing reserved to those who have allowed themselves to be changed by Him. This is a beautiful invitation to let ourselves be changed by God. He knows how to do it, because He knows each one of us. “Lord, You know me”, every one of us might say. “Lord, You know me. Change me”.