On February 14th, in 1930 and 1943 respectively, St. Josemaria saw that both women and priests could form part of Opus Dei. Some texts and videos about these two foundational dates.

The Prelate in his February letter said: "On February 14th, we will commemorate in the Work the anniversary of the extension of the apostolic work to women, in 1930, and the foundation of the Priestly Society of the Holy Cross, in 1943. Our Father viewed that coinciding of dates, in different years, as a sign of Divine Providence, which wanted to strongly emphasize the unity of Opus Dei. Let us give thanks for this divine gift, which each and every one of us should foster and defend, first of all in our own lives, and also in our surroundings." 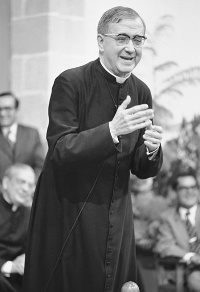 Obviously, what Father Josemaría "saw" on October 2, 1928 was not events or historic details, but only the essential element of the divine message.

"A short time later, on February 14, 1930, I was celebrating Mass in the little chapel of the elderly Marchioness of Onteiro, Luz Casanova's mother, whom I took care of spiritually while I was chaplain of the Foundation. During the Mass, right after Communion: the whole women's branch of the Work! I cannot say that I saw it, but intellectually, in detail, I grasped what the women's branch of Opus Dei was to be... I gave thanks and, at the usual time, I went to the confessional of Father Sanchez. He listened to me and then said, 'This is just as much from God as the rest.'" 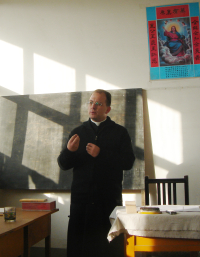 On the morning of February 14, 1943, Father Josemaría left home early to say Mass for his daughters in the oratory of Jorge Manrique. As soon as Mass was over, he took out his notebook and wrote on the page for February 14, feast of Saint Valentine, "In the house of the women, during Holy Mass: 'Societas Sacerdotalis Sanctae Crucis' [the priestly society of the Holy Cross]." And then, on that same page, he made a little drawing of a circle with a cross inside it.

Next day Father Josemaría went to El Escorial, not far from Madrid, where Alvaro del Portillo, José María Hernández and José Luis Múzquiz were preparing for their theology exams. With a great sense of unworthiness, almost with shame, he told Alvaro of the grace he had received during Mass the day before. The necessary documents needed to be prepared quickly. Alvaro would be the one to go to Rome to seek approval for the Priestly Society of the Holy Cross, which the Lord had shown him, in outline, on February 14, already a day of thanksgiving as the anniversary of that other memorable February 14 when the Lord had made him realize that he should extend Opus Dei's apostolate to women. 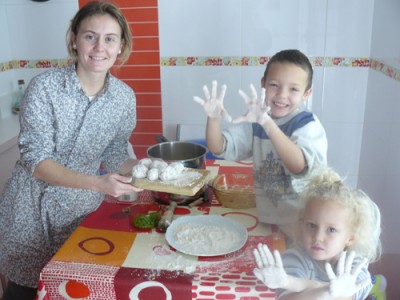 Both the inclusion of women and the incorporation of priests took him by surprise. Especially the founding of the women's branch, which happened when his mind had been lacking light and his will divided between wanting and not knowing how.

Speaking about the paradoxes of the founding, he would say one day: "The foundation of Opus Dei happened without me; the women's branch, against my personal opinion; and the Priestly Society of the Holy Cross, when I was seeking it but unable to find it."

"Women of Opus Dei: In Their Own Words"

What Is the Priestly Society of the Holy Cross?