With the Father, Hakuna Matata!

On Wednesday 18th December 2019 in the afternoon, the Father had a get-together with young women who frequent centres of Opus Dei all over Kenya. We summarize the main points here. 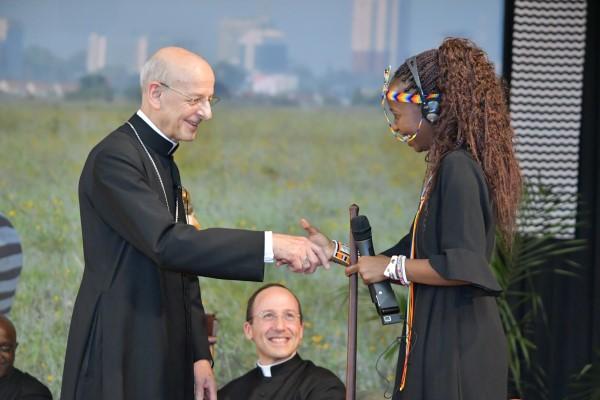 The Father’s arrival at Kianda was enlivened by a lineup of young girls from various youth clubs for girls dressed in the colours of the Kenyan flag, danced and sang ‘Jambo Bwana!’ a Swahili welcome song. Drum beats echoed from the hall as the Father approached and, at his entry, joyful ululations filled the air.

The Father, pleased by their youthful exuberance, commended their singing and expressed his pleasure at being in Kenya, the country in which Opus Dei began its apostolate in Africa.

The Father begun the get-together by encouraging the young women in attendance to take advantage of the spiritual formation they receive in the youth clubs and study centres to get to know Jesus Christ. He challenged them to ask Him for a contagious joy and to take a genuine interest in their classmates, friends and family. “With Jesus, you too can draw people closer to God, just like the apostles and the saints,” he said. 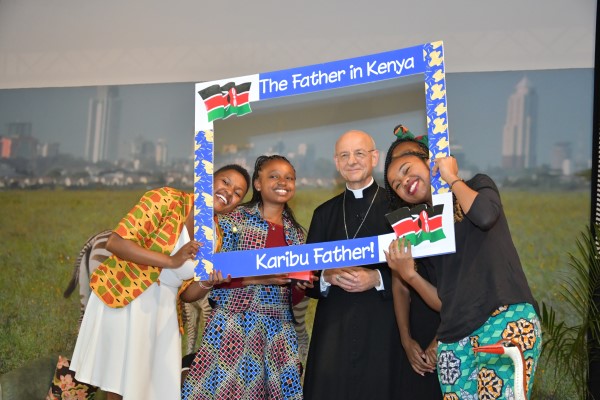 Bakhita and Flo, from Fanusi Centre, a residence for university students, presented a Safaricom sim card to the Prelate, a must have for all who visit Kenya as it allows one to use Mpesa, a convenient mobile money transfer system widely used in the country. On a light note, they let him know that if ever he was stranded, it would be incredibly easy to send him money through Mpesa.

Adding to his gift basket, Jelina presented a walking stick to the Prelate, explaining that every father in her community (Samburu) owns one. It is a walking stick which shows that the father is the head of the family and he provides for and protects his family. She told the story of her father, who has ensured that she receives the best education, despite coming from a community which often does not encourage education for girls. “Father, I know that you are a good father to your children in Opus Dei. How can we show our gratitude to our parents for all that they do for us?” To this the Prelate responded that it is something natural to love our parents but one can always grow in that love. This is possible if one appreciates the sacrifices parents have made for them and through praying for everything they have in their minds and hearts.

Rosa, a student at Tewa Training Centre in Kilifi, asked a question on behalf of other young people in the process of discerning their vocation. She wanted to know how to overcome the fear of commitment. Valentine, a former student of Kibondeni focused on the beauty of marriage especially when examples in society make young people afraid of making this commitment. To these questions, the Prelate answered that the vocation both to celibacy and marriage calls for sacrifice. “We all have a vocation – to be holy and to be apostles. Within that general call, we have to discover our own particular vocation. Ask Our Lord in prayer to give you light and fortitude to do his will,” he said. 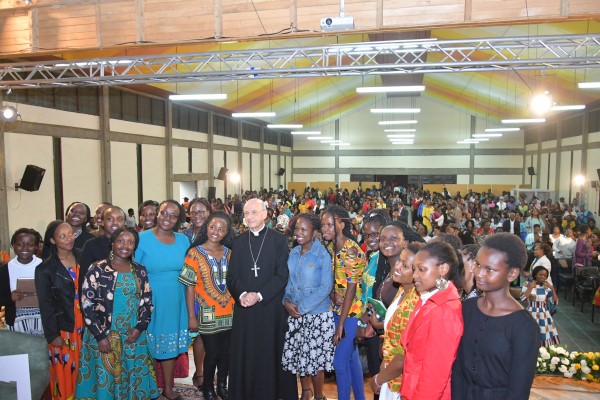 The Prelate discussed the need for forgiveness in answer to a question from Assumpta, a South Sudanese student at Kibondeni College. She described the experience of war in her home country and the difficulties that come from it. The prelate pointed out that sometimes we want to forgive without forgetting the transgression committed against us. “A sign that will show one has forgiven, he said, is the resolve to pray for those who have offended us”. He urged the young people to pray for the Holy Father reminding them that he had celebrated his birthday the previous day. The radiant smiles captured in the selfie taken by a group of girls with the Father at the end of the get together gave voice to the joy the Father had inspired in the hearts of all present. With the Father, Hakuna Matata!