My Friends The Street Guys

Eastlands College of Technology was set up as a club and eventually a college for Jua Kali workers in Nairobi. 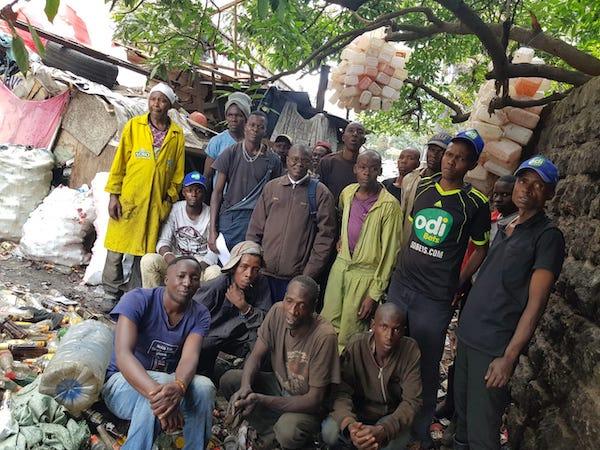 Peter, a middle aged man whose house in the slum was burnt and whose wife ran away with his child, lives at a place called “the base”. This is a common term for the place where street guys gather and sleep, often with no roof over their heads and sometimes with some canvas. Peter spent a year in hospital after the amputation of a finger. He could not pay the bill and so eventually escaped and lives in relative hiding from the authorities. His story is not uncommon in Nairobi.

What is unusual is that he is mature, has a certain formation and is responsible. He goes to Mass on Sundays and encourages his colleagues to do the same. He washes cars for a living when there are cars to wash. He is a leader and the others listen to him and follow him. This has made him an interesting channel through whom to try to get some formation into the other guys that live in the same place.

A priest came to have his car washed recently. While washing it Peter sang the hymns he knew from Church to show the priest he was not joking when the said he went to Mass.

I got interested in these people when we started a club in Eastlands, a middle to lower income area of Nairobi, fifteen years ago. There are approximately 60,000 street kids in Nairobi and so it is frequent to meet some along the street. We invited some to frequent the club and had some amusing experiences. One realized that all the people in the club smelt good, so when he found an old deodorant canister in the garbage he collected, he used it on himself before entering the club. This was a type of “environmental formation”.

At one stage we organised a shelter for some street kids. We got a few white bedsheets from a donor and let the kids use them for the first time in their lives. One suggested that the next time the sheets could be black! When asked why black bedsheets could be useful, he replied “So they don’t show the dirt”, an interesting entrepreneurial idea from a street kid in Nairobi!

When we were setting up the grounds for the new buildings at Eastlands College of Technology (ECT) I was doing some work on a fence and one of the kids came to me. It was lunchtime and he saw that I had not eaten and so he offered me some icing from a cake he had found in the garbage, I was struck by his thoughtfulness, even though I was not exactly excited at the prospect of eating it!

Time and again I have witnessed the gentleness and authentic goodness of some of these people in the street; they are exposed to such pitiful bad conditions yet they maintain a special refinement that can be surprising. One night I met a group of them whom I knew. They were concerned for my safety in a rough area at that time of night and offered to accompany me home, which they did. A few cars stopped at a safe distance and shouted to me to be careful with those ruffians who could be up to no good. But I knew I was with my friends.

They lead a hand-to-mouth existence. They don’t know where the next meal will come from. Most of these kids or older men collect plastic bottles from the street which they can sell. Some collect cardboard and newspapers if they are lucky. They are always grateful for what you give them. Meeting them is an education. It brings home to you time and again the excess of material wealth that we live with on a daily basis.

ECT was set up as a club and eventually a college for Jua Kali workers. This is a Kiswahili term for those who work under the sun. I have developed a special eye for them. One day I met a kid selling pineapple on a street near where I live. He had no school fees and so had to drop out of secondary school. I meet hundreds of these. We got him a sponsor and today he is in second year of university.

Some lady donors came to visit from a faraway country and wanted to see what we do. We decided to organize a lunch in a local hotel. The hotels in this part of the city are a bit different from other places. The guys had never eaten in such a place, let alone entered. They were shell-shocked to see that these ladies were willing to have lunch with them. We spread ourselves out, a lady at each table, but one table was left without a lady while another table had two. The guys politely asked if a lady could sit at their table; they had never eaten with a lady before.

During lunch one fellow brought out a silver plated ring and offered it to one of the ladies. He had found it in the garbage. She initially thought he might be proposing, but then saw it was a kind gesture of thanks for this special occasion. However, just in case, she had it valued. Luckily it was not worth a fortune.

So after the experience of these years, by the time we met Peter and his colleagues we were well prepared to do something. We have tailored our courses to fit all possibilities.

Last month I started a course focused on the needs of the students. I expected five guys would attend but on my first day to train them twenty showed up. Most have a low educational background but they are very attentive to the training. The courses include financial literacy, basic accounting, marketing and ethics.

They don’t come to the college; we go to them. A sponsor has kindly covered the costs. It is not much but hopefully it will give these guys a glimmer of hope to change their situation.