On Tuesday morning, the Father met with various families in Kianda School and also visited Kibondeni College that is celebrating its 50th anniversary. 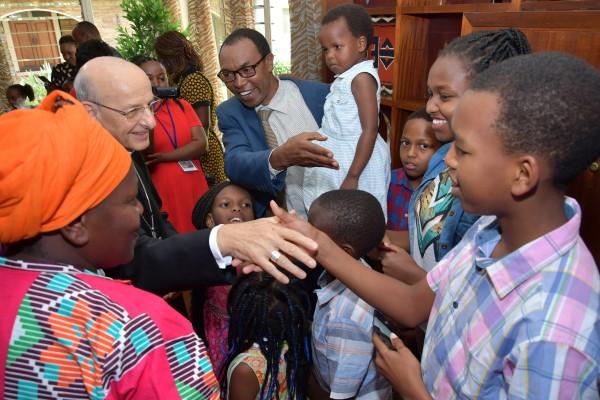 On Tuesday morning, Mons. Fernando Ocáriz met 15 families drawn from all over Kenya. The meeting took place in the Kianda School Common Room. Among the gifts the families gave the Father were Christmas cards, a sculpture, a painting, children’s catechism books given by the author, a nativity scene, coffee and a live Turkey to celebrate Christmas!

The Father had a brief conversation with each family, blessed the children who were present and gifted them with candy. He gladly took a pictures with each family, souvenirs that will serve as a reminder of the Father’s unceasing affection for his children in Kenya. He gave the families rosaries and thanked them for receiving him and gave them a blessing. 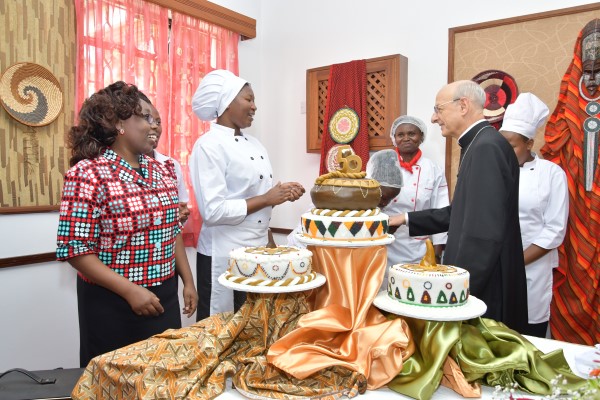 The Kianda School Academic Council members met him briefly, took a photo outside the main building and then saw him off.

A group of girls from Faida Club waited with song and dance and waved at him by the roadside as he drove past the Centre. They waved a banner reading Faida loves the Father! As the car carrying him slowed down, he waved back at them and blessed them.

His next destination was Kibondeni College of Catering and Hospitality Management. The College imparts technical skills in the hospitality sector to young women with the aim of making them self-reliant and improving the standard of living of their families.

This year, Kibondeni College celebrates its golden anniversary. The culmination of the celebration was the visit of the Prelate to the College today. He was warmly received by the Management of the College and led to the newly inaugurated Marian Shrine. Many of the staff, students and their families were gathered at the Shrine singing a Kiswahili hymn to Our Lady. 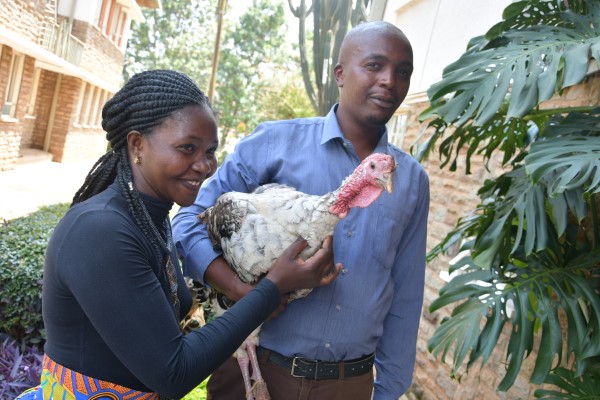 The Father arrived amidst joyful ululations accompanied by the African drum and kayamba. He greeted those present and encouraged them to always be joyful even amidst the difficulties they may encounter. He then said a short prayer and lit the candle which Sheila, a student who was baptized in April this year, presented to him. Bakhita, the youngest daughter of the College receptionist, Victoria, offered him some flowers to present to Our Lady. The Father did so as all clapped and spontaneously broke into a Marian hymn.

Tyler and Joseph, two sons of some staff members then presented to him a young seedling of a Thika Palm tree which he planted next to the Shrine. The Father was then accompanied to the College dining room where he signed the visitors' book and filled out a personalized certificate declaring him a golden member of the Friends of Kibondeni Association.

He then cut a beautifully decorated 50th Anniversary celebration cake. Jade and Venic, two Diploma students, then offered him a handy snack bag with the College logo containing pre packs of the cake that he could take along with him in his East African travels. The Father laughed and gave a blessing to all present before leaving. The students broke into song once more and the Father left the College accompanied by a dancing guard of honour of elated staff and students. It was the perfect climax to their Golden Jubilee Anniversary.