The Prelate in Enugu: Love Christ and Take Him Everywhere

On Tuesday July 24, the Prelate travelled from Lagos to meet other faithful of Opus Dei and their friends. 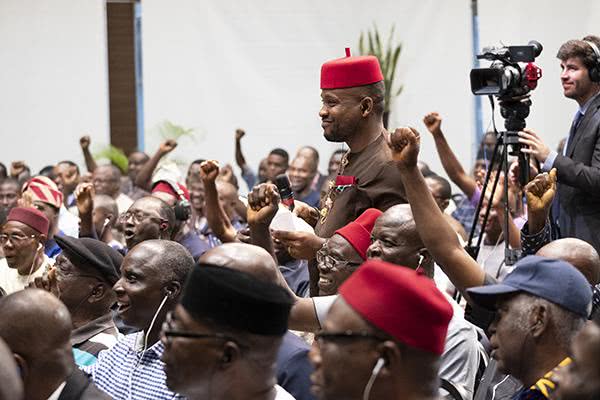 The plane bringing him from Lagos landed at Enugu airport at exactly 9.40 am after a 50-minute flight. He was received by some families who presented him with a bouquet of flowers. Shortly afterwards, he was driven to Ugwuoma, a centre of Opus Dei, at the Independence Layout. 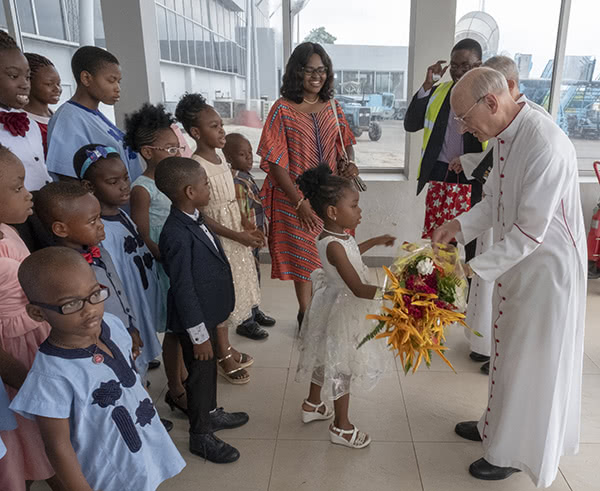 His first get-together was with a group of 26 priests and 14 seminarians from Enugu and surrounding dioceses. Bishop Elect Ernest Obodo, the soon to be ordained auxiliary bishop of Enugu diocese, was among those present. Msgr. Ocariz shared his thoughts with his brother-priests on the beauty of the priestly vocation, as well as the responsibilities they had for their souls and those God entrusts to them. 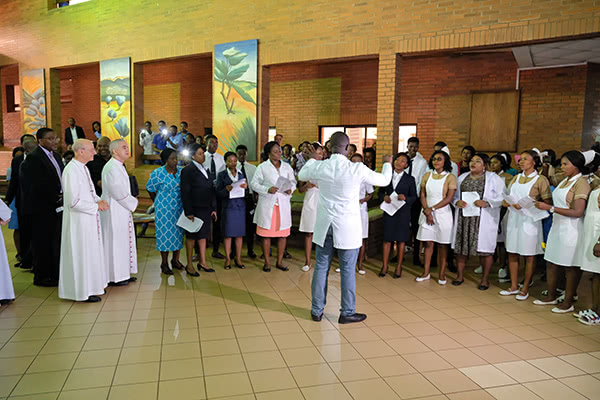 One priest asked the Prelate for suggestions on how a parish priest, in spite of his busy schedule, could arrange matters without neglecting his spiritual life. The Father encouraged him to give priority to personal prayer, focus on Jesus in the Eucharist and to have a “plan” for the day that he tries to follow in an orderly way.

Bishop Elect Obodo thanked Opus Dei for the spiritual support he and some priests of the diocese were receiving. He also wanted advice on how best to help the priests entrusted to him. The Prelate disclosed his own method of carrying out his tasks as the Ordinary of Opus Dei priests through the vicars in each territory. He spoke about the effort to provide the priests of the Prelature with the spiritual and doctrinal care they need for their interior lives and work. 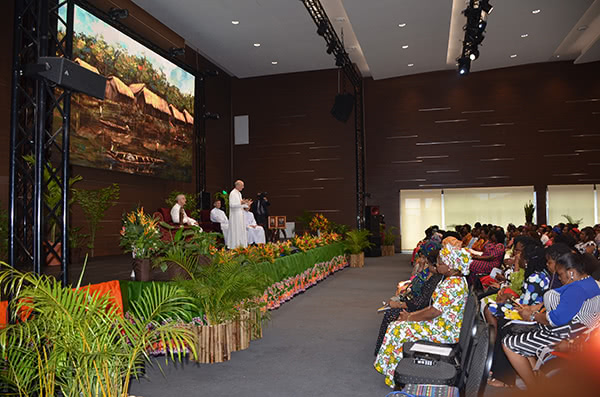 A seminarian from Awka diocese wanted to know how a priest could relate with women without losing his soul in a bid to save the woman’s. In response, Msgr. Ocariz advised priests to relate with women through the confessional, endeavouring to be respectful and charitable, but without undue familiarity.

The next stop was Niger Foundation Hospital (NFH) Enugu, which happened to be celebrating its 25th anniversary. Monsignor Ocariz was welcomed with a colourful and affectionate display at the hospital lobby by a crowd that seemed like the entire hospital staff. There were nurses bearing bouquets of flowers, a choir singing to the beat of drums and other instruments. They were evidently happy to meet the successor of St. Josemaria Escriva, whose teaching inspired the hospital’s foundation and guides its approach to patient care. 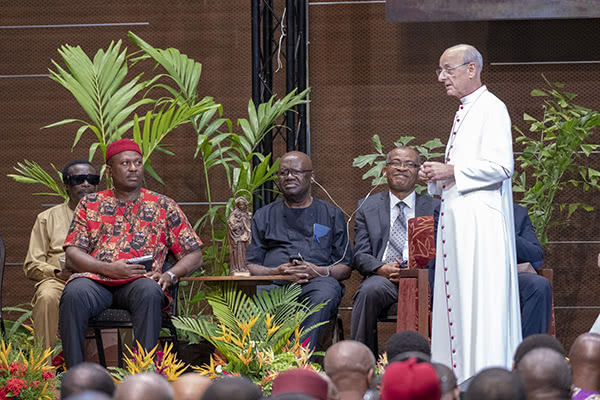 At a brief get-together with some hospital staff, one of the first doctors, Dr. Regina Akosa, told the Father what patients back in 1995 loved most about the NFH. She said it was, and still is, the careful attention to their health, the cleanliness of the environment and the quality of medical care patients receive. Inspired by the teachings of St. Josemaria Escriva, patients who freely want, also receive spiritual attention. According to her, for many patients, the “centre of gravity” is the hospital chapel where Catholics and non-Catholics go to find solace before Jesus in the Blessed Sacrament. She also mentioned several deathbed conversions of patients inspired by the love and dignity with which they were cared for by the hospital staff. 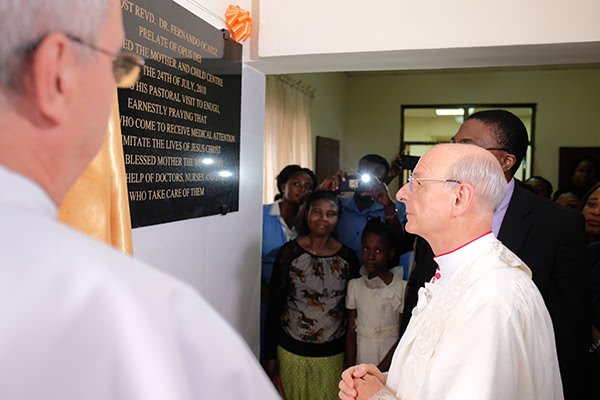 Msgr. Ocariz’s visit to NFH now, comes nineteen years since he first accompanied the previous Prelate Bishop Javier Echevarria to this hospital. He blessed the ongoing construction of the new Mother and Child Wing of the hospital. This hospital expansion has been made possible with funds from Harambee, an initiative set up to promote social and welfare projects in Africa following St. Josemaria Escriva’s canonization in 2002.

There was yet another get-together for hundreds of women at an event centre called The Base. Single sex education and boarding versus day school is a fiery topic of discussion among parents which the Prelate was invited to comment on. In his reply, he reminded his audience that it wouldn’t be correct to say that educating boys and girls separately is the only option, but that experience has shown that it is more effective. Also since parents are the first educators of their children it is always better, when possible, for children to attend school from home. 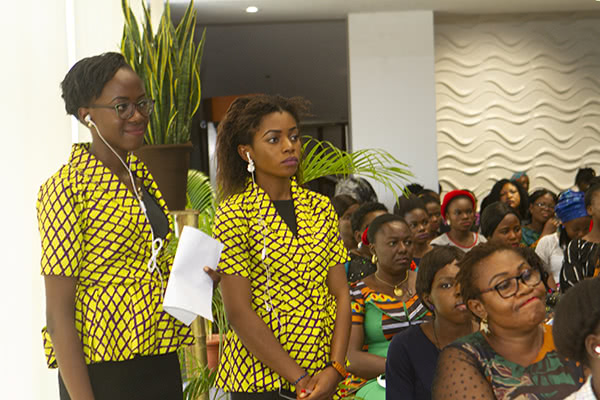 Later in the day, the heavy downpour did not deter the hundreds of men who gathered at the same venue for their own meeting with Msgr. Ocariz. The audience showed the Prelate a taste of the Igbo culture when one of the participants invited everyone to greet him in the traditional style, with the war-like call “Che Che Che Che Igbo Kwenu” to which the entire hall, with raised clenched fists responded with a deafening "Yaa!"

The Father reminded them that God wanted us to collaborate with Him in the salvation of the world. He described this as a beautiful target that may sometimes seem impossible to achieve. “Prayer and the Eucharist”, he said, “strengthen the effort to make Christ the centre of our lives, thoughts, works and relationships with our families and friends”. “Don’t be discouraged by any difficulty because God is with us”, he added. He recalled again a favourite prayer of St. Josemaria Escriva: “If God is with us, who can be against us?”

As he had done on other occasions since his arrival in Nigeria on July 19, the Prelate of Opus Dei reminded everyone of Nigeria’s greatest resource, its people. 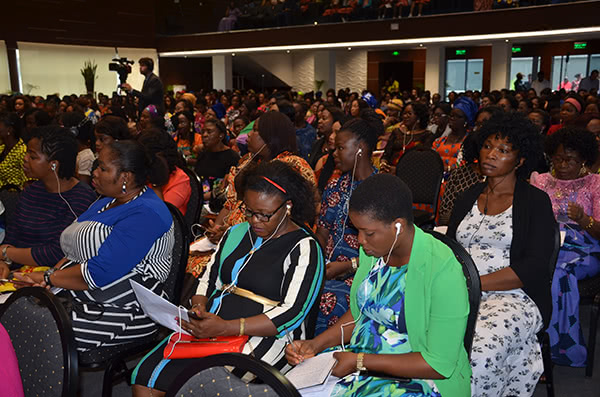 He encouraged everyone to react with energy whenever they felt reluctant to fulfil obligations such as work, family duties and prayer. “At such moments”, the Prelate said, “we should focus on Jesus Christ, recover our freedom, and carry out these responsibilities because we want to, and for love of God, but not because we are being forced to do them. At times like these we can find the strength that comes from the love of God”. 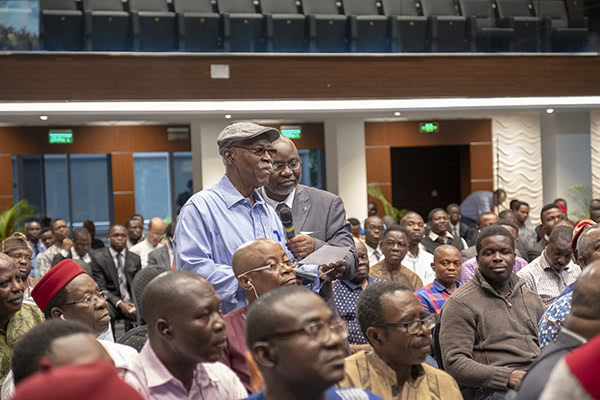 An 81-year-old widower (a supernumerary member of Opus Dei), who had been married for 55 years before his wife died a few weeks earlier, was visibly moved and in tears as he asked the Father how he could practice presence of God with the memory his late wife. Monsignor Ocariz, who was also moved, condoled him. He said he prayed for her soul as well as for the family when he received the news of her death in Rome. “Speak often with your wife, convinced, with hope based on faith, that your wife is in heaven with God”.

A father of eight children, one of whom was adopted, asked the Father to speak on openness to life. The Prelate spoke on the need to have faith in the value of each human life. “All human life is created by God”, he said. “The soul is great, loved by God and worth more than any material things. Each soul is destined for eternal happiness with God”, he added.

Responding to a young man who was trying to know if God was calling him to a life of apostolic celibacy, the Father told him to ask God for light in prayer with an open mind. He told him “to consider more what was God’s will, rather than what might be easier or simpler”. While assuring him of his prayers, he encouraged the young man to also seek help in spiritual direction.

Before giving his final blessings, he urged everyone again to pray for the Pope, to recover their freedom whenever they were unhappy, and to do things for the love of God.