"Holy Father, we bring you letters from the elderly and orphans"

After the general audience on April 16, a group of university students from UNIV presented Pope Francis with hundreds of letters written by elderly people and orphans from all over the world. 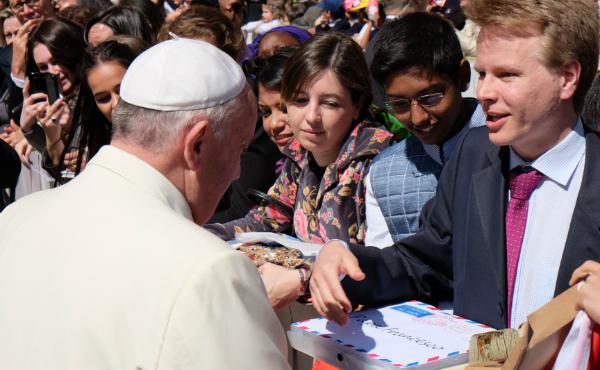 At the end, the Holy Father greeted the students from the UNIV Forum, organized by the Prelature of Opus Dei.

During his audience the Pope said: “This week, it will do us all good to look to the Crucifix, kissing the wounds of Jesus, kissing the Crucifix. He has taken upon himself the whole of human suffering. Looking at Jesus in his Passion, we see as in a mirror also the suffering of all humanity and find the divine answer to the mystery of evil, of suffering, of death . . . It is a deep wound for us to see suffering and death, especially that of the innocent! When we see children suffering, it is a wound in the heart. It is the mystery of evil, and Jesus takes all this evil, all this suffering, upon himself.”

Afterwards, a group of university students from UNIV presented Pope Francis with hundreds of letters written by elderly people and orphans from all over the world. The students were given rosaries and crucifixes blessed by the Pope to give the letter writers when they return to their home countries. 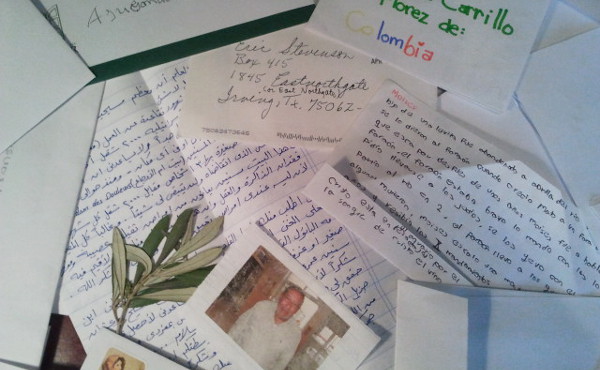 St. Josemaria, founder of Opus Dei, used to tell young people that humanitarian aid “can never replace the effective tenderness of direct, personal contact with our neighbor: with that poor person living in a nearby district; with that sick person suffering in an immense hospital; or with those who need a bit of affectionate conversation, a Christian friendship to overcome their solitude, spiritual support to remedy their doubt and skepticism.”

Therefore the founder encouraged young people to take part in visits to the needy, to help foster in them, on seeing the suffering of others, “a heart of justice and charity.”

Many of the correspondents appeal to the Pope to pray for peace and unity in the world. Gloria Herráiz, 88 years old, who lives in a home for the elderly in

The theme of UNIV Forum 2014 is “The ecology of the person and the human environment.” It is inspired by Pope Francis’ words on human ecology, which requires a “serious commitment to respect and care for creation, to pay attention to every person, to combat the culture of waste and disposal so as to foster a culture of solidarity and encounter” (Pope Francis, 5 June 2013).

“Solutions to ecological problems can only be founded on moral ecology”(Interview with Oskari Juurikkala, president of UNIV Forum 2014)