Commentary on the Gospel: The Lost Sheep

Gospel for the 24th Sunday in Ordinary Time (Cycle C), and commentary. 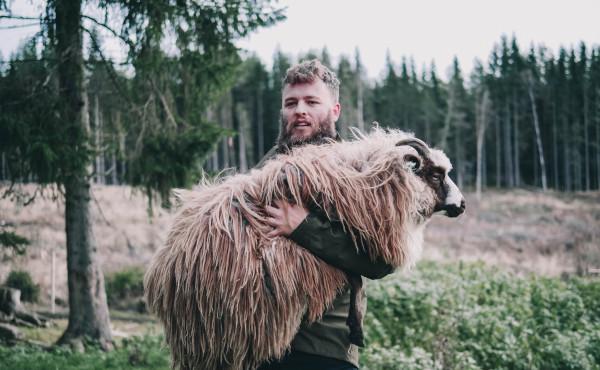 Now the tax collectors and sinners were all drawing near to hear Jesus. And the Pharisees and the scribes murmured, saying, “This man receives sinners and eats with them.”

So he told them this parable: “What man of you, having a hundred sheep, if he has lost one of them, does not leave the ninety-nine in the wilderness, and go after the one which is lost, until he finds it? And when he has found it, he lays it on his shoulders, rejoicing. And when he comes home, he calls together his friends and his neighbors, saying to them, ‘Rejoice with me, for I have found my sheep which was lost.’ Just so, I tell you, there will be more joy in heaven over one sinner who repents than over ninety-nine righteous persons who need no repentance.

“Or what woman, having ten silver coins, if she loses one coin, does not light a lamp and sweep the house and seek diligently until she finds it? And when she has found it, she calls together her friends and neighbors, saying, ‘Rejoice with me, for I have found the coin which I had lost.’ Just so, I tell you, there is joy before the angels of God over one sinner who repents.”

“Now his elder son was in the field; and as he came and drew near to the house, he heard music and dancing. And he called one of the servants and asked what this meant. And he said to him, ‘Your brother has come, and your father has killed the fatted calf, because he has received him safe and sound.’ But he was angry and refused to go in. His father came out and entreated him, but he answered his father, ‘Lo, these many years I have served you, and I never disobeyed your command; yet you never gave me a kid, that I might make merry with my friends. But when this son of yours came, who has devoured your living with harlots, you killed for him the fatted calf!’ And he said to him, ‘Son, you are always with me, and all that is mine is yours. It was fitting to make merry and be glad, for this your brother was dead, and is alive; he was lost, and is found.’”

This Sunday’s gospel presents us with the famous “parables of mercy and joy” recorded by Saint Luke, the evangelist to the Gentiles. Since we have already commented on the parable of the prodigal son in another place (cf. Commentary for the 5th Sunday of Lent), we will focus here on the first two parables about the lost sheep and coin.

During his public life Jesus was criticized for the goodness with which he treated publicans and sinners. But those critics filled with disdain and a false justice are met by Jesus not with a reproach but a beautiful lesson on God’s mercy towards sinners, whom he seeks out one by one with great diligence and love.

Many Fathers of the Church see in these parables a summary of salvation history. For example, Saint Cyril of Alexandria says: “For the sheep, He says, are a hundred, so making the number of His subjects mount up to a multitude complete and altogether perfect. For constantly, so to speak, a hundred is a perfect number, being composed of ten times ten. And we have learnt also from the divinely-inspired Scripture, that a ‘thousand thousands minister to God, and ten thousand times ten thousand stand around His lofty throne.’ The sheep therefore are a hundred: and of them one has gone astray, even the family upon earth.”[1] Saint Gregory the Great adds: “When man sinned he abandoned heaven. To complete the number of sheep in heaven, our Shepherd sought man, abandoned on earth. After redeeming mankind, he returned to the kingdom of heaven. And he called his friends and neighbors, that is, the choirs of angels who constantly fulfill his will and rejoice at his side.” [2]

Besides this universal reading, each of us can also see ourselves reflected in the lost sheep or coin. No matter how sinful we see ourselves, we should all be filled with hope when meditating on these moving parables, since they reveal God’s immense love for each person, and especially for those most distant from Him. As Pope Francis said: “In Jesus’ vision there are no sheep that are definitively lost, but only sheep that must be found again. We need to understand this well: to God no one is definitively lost. Never! To the last moment, God is searching for us.”[3] And in another place the Pope insists: “God never tires of forgiving us; we are the ones who tire of seeking his mercy. Christ, who told us to forgive one another ‘seventy times seven’ (Mt 18:22) has given us his example: he has forgiven us seventy times seven. Time and time again he bears us on his shoulders. No one can strip us of the dignity bestowed upon us by this boundless and unfailing love.”[4]

While these parables fill us with hope for our own life, they also challenge us to imitate Jesus’ understanding for others, his diligence in seeking out the one who has distanced himself from God and his joy on recovering him. Jesus asks us to open our hearts to everyone, and not to judge others and remain shut up in our own “pen.” As Saint Josemaria said, “out of a hundred souls, we are interested in a hundred,” and hence we need “to open out like a fan in order to reach all souls.”[5]

Knowing that we have been forgiven will make us eager to spread the good news of God’s forgiveness to many others. As a Father of the Church says about the shepherd in the parable, “when he finds the lost sheep, his doesn’t punish it or drive it towards the sheepfold with violence; rather he carries it mercifully on his shoulders and reunites it with the flock.”[6] Thus we will often share the joy of a new conversion with God and his friends in Heaven.