When I was 32 I was converted again

My name is Marco and I first heard of St Josemaria’s message about Christian living just over a year ago. I had stopped practicing my faith more than fifteen years before.

My name is Marco and I first heard of St Josemaria’s message about Christian living just over a year ago. I had stopped practicing my faith more than fifteen years before – I still said prayers every day, but without knowing what I was saying or who I was talking to. I would catch glimpses of God around me, in the beauty of a sunny day, or a smile, or a work of art, but I didn’t have the tools to begin to understand it all.

I would catch glimpses of God around me, in the beauty of a sunny day, or a smile, or a work of art, but I didn’t have the tools to begin to understand it all.

I come from a city called Livorno in Tuscany, but I work in human resources in a large company in Milan. I love running and have taken part in three marathons – in New York, Rome and Florence. I also like bicycle riding and any other outdoor activity. When I have time I enjoy doing tourism in the city where I live, with a guidebook in one hand and my camera at the ready. I do the rounds of every single exhibition and museum, plus all the main historical sites. I also like cooking for my girlfriend and other friends.

I can say that I was converted again at the age of 32. When I read the Gospel I discovered not only a beautiful book but a wonderful story that describes our daily life perfectly, as lived 2000 years ago. I have also started learning prayers. All of this has helped me to combine my conversation with God, with a full day’s hard work. The 30 minutes it takes me to get to work have now become the perfect time to read, study and pray. 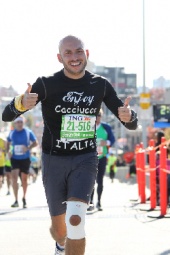 I began going to Opus Dei spiritual formational activities and have been learning little by little. Now Mass is the most important moment of my week, especially Mass at my local church in Milan. All the things I didn’t understand about the Catholic Church, things that put me off and made me criticize it in a superficial way, have been clarified by this formation, and now that I can understand them, I accept them.

When I’d been going to the Opus Dei center for several months I was offered the possibility of doing something practical: going to Nicaragua, one of the poorest and most troubled countries in Latin America, during my summer holidays, to help build a school. 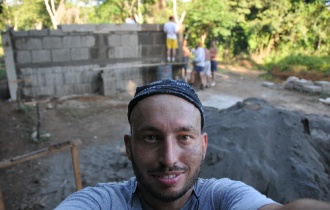 I jumped at the chance, and went there with a group of university students who attended the Christian formation offered by Opus Dei in several different cities in Italy. The days started early, with 6.30 Mass and a meditation from a priest who helped us to think about why we had come to Nicaragua and how to make the most of the experience. After a quick breakfast we went straight to the building-site, and set to work as laborers, with bricks and cement, hammers and nails – not much connection with my usual job. In spite of the tropical heat and the insects, it was great to be building a school, and very heartening to receive frequent visits from the local children! We would stop – briefly – for lunch, followed by the rosary for anyone who wanted to join in. That was what fueled our return to work in the afternoon.

We stopped work at six, covered in dust, tired and hungry. Then it was time for a cold shower, the evening meal, and afterwards we sat down together and all chatted about our lives, sometimes talked about more serious subjects, and sometimes joked about the unexpected happenings of the day. Tiredness soon led us to our “bedrooms” – with fifteen or twenty beds in each.

We left the school building finished, but the biggest challenge for each of us continued – how to take home the motivating dynamism of self-giving, to practice it every day in our ordinary lives here in Italy, in a totally different setting and a different pace of life. 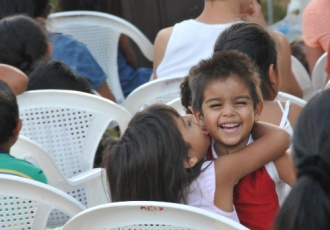 When I got home I started doing voluntary work in an orphanage on Saturday mornings. I’ve decided to do without my weekend lie-ins so as to learn from the children there, who are so much in need of love and affection – and fun! I think that’s one of the best things I discovered in Nicaragua (as well as the gallopinto, a delicious dish of rice and beans, that we often had for dinner). It really makes me laugh to think how just few months back the very idea of getting up early on a Saturday morning after the week’s work, was something totally out of the question.

Right now I’m at the beginning of the road. The way ahead is still full of obstacles, but Opus Dei has been there for me, giving me formation, and even though I’m not a member, it is helping me to be a better person – both as a Christian and a worker. There may be many falls waiting just around the corner, but there’s a point in The Way that I’m very familiar with, in the chapter on “Perseverance” (no. 983): “To begin is easy; to persevere is sanctity. Let your perseverance not be a blind consequence of the first impulse, the work of inertia: let it be a reflective perseverance.” As a marathon runner, all I can do is keep going!

I’ve decided to do without my weekend lie-ins so as to learn from the children there, who are so much in need of love and affection – and fun! I think that’s one of the best things I discovered in Nicaragua