"Unity is a gift, it is a grace to be requested through prayer"

In his 20 January general audience, Pope Francis spoke about the Week of Prayer for Christian Unity, and the need to beseech God humbly for this gift. 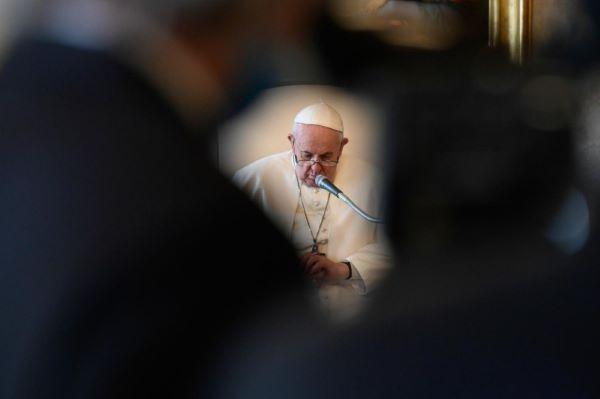 In this catechesis, we will reflect on the prayer for Christian unity. In fact, the week of the 18th to the 25th of January is dedicated specifically to this – to ask God for the gift of unity to overcome the scandal of division between believers in Jesus. After the Last Supper, He prayed for His own, “that they may all be one” (Jn 17:21). This was His prayer before the Passion, we could call it His spiritual testament. Let us note, however, that the Lord did not command that His disciples be united. No, He prayed. He prayed to the Father for us, so that we might be one. This means that we are not able to achieve unity with our own strength. Above all, unity is a gift, it is a grace to be requested through prayer.

Each one of us needs it. In fact, we know that we are not capable of preserving unity even within ourselves. Even the apostle Paul felt a painful conflict within himself: wanting the good but inclined toward evil (see Rm 7:19). He had thus grasped the root of so many divisions that surround us – between people, in families, in society, between nations and even between believers – and inside us. The Second Vatican Council stated, “the imbalances under which the world labors are linked with that more basic imbalance which is rooted in the heart of man. For in man himself many elements wrestle with one another. […] Hence he suffers from internal divisions, and from these flow so many and such great discords in society” (Gaudium et spes, 10). Therefore, the solution to these divisions is not to oppose someone, because discord generates more discord. The true remedy begins by asking God for peace, reconciliation, unity.

And this is valid, first of all, for Christians. Unity can be achieved only as a fruit of prayer. Diplomatic efforts and academic dialogue are not enough. These things are done, but they are not enough. Jesus knew this and opened the way for us by praying. Our prayer for unity is thus a humble but trusting participation in the Lord’s prayer, who promised that any prayer said in His name would be heard by the Father (see Jn 15:7). At this point, we can ask ourselves: “Do I pray for unity?” It is Jesus’s will but, if we inspect the intentions for which we pray, we would probably realize that we have prayed little, perhaps never, for Christian unity. And yet, the world’s faith depends on it; in fact, the Lord asked that we be one “so that the world might believe” (Jn 17:21). The world will not believe because we will have convinced it with good arguments, but if we will have borne witness to that love that unites us and draws us near, yes: it will believe.

During this time of serious hardship, this prayer is even more necessary so that unity might prevail over conflicts. It is urgent that we set aside preferences to promote the common good, and so our good example is fundamental: it is essential that Christians pursue the path toward full visible unity. In the last decades, thanks be to God, there have been many steps forward, but we still need to persevere in love and in prayer, without lacking trust or tiring. It is the path that the Holy Spirit gave rise to in the Church, in Christians and in us, from which there is no turning back. Ever onward.

To pray means to fight for unity. Yes, fight, because our enemy, the devil, is the one who divides, as the word itself says. Jesus asks the Holy Spirit for unity, to create unity. The devil always divides. He always divides because it is convenient for him to divide. He fosters division everywhere and in any way, while the Holy Spirit always joins in unity. In general, the devil does not tempt us with high theology, but with the weaknesses of our brothers and sisters. He is astute: he magnifies others’ mistakes and defects, sows discord, provokes criticism and creates factions. God has another way: He takes us as we are, He loves us so much, but He loves us as we are and takes us as we are; He takes those of us who are different, He takes sinners, and He always nudges us towards unity. We can evaluate ourselves and ask ourselves if, in the places in which we live, we nurture conflict or fight for an increase of unity with the tools that God has given us: prayer and love. What fuels conflict, instead, is gossip, always talking behind peoples’ backs. Gossip is the most handy weapon the devil has to divide the Christian community, to divide families, to divide friends, to always divide. The Holy Spirit always inspires unity.

The theme of this Week of Prayer specifically regards love: “Abide in my love and you shall bear much fruit” (see Jn 15:5-9). The root of communion and love is Christ who makes us overcome our prejudices to see in others a brother or sister to be loved always. Then we will discover that the Christians of other confessions – with their traditions, with their history – are gifts from God, they are gifts present within the territories of our diocesan and parish communities. Let us begin to pray for them and, when possible, with them. We will thus learn to love and appreciate them. Prayer, the Council reminds us, is the soul of every ecumenical movement (see Unitatis redintegratio, 8). Therefore, may prayer be the starting point to help Jesus make His dream come true: that they all may be one. Thank you.