Topic 24: Anointing of the Sick

For a Christian sickness and death can and should be a means to seek holiness and to redeem with Christ. This is the purpose of the sacrament of the Anointing of the Sick. 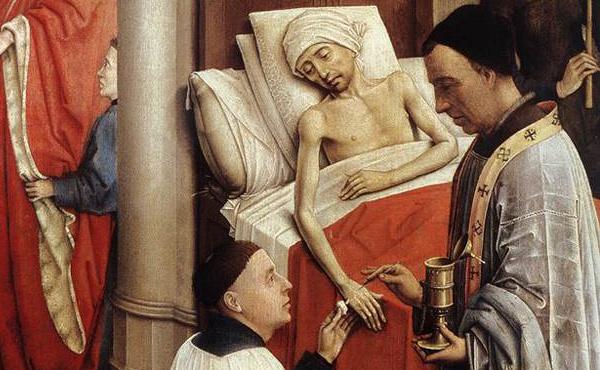 1. Anointing of the Sick, sacrament of purification and salvation

Nature of this sacrament

The Anointing of the Sick is a sacrament instituted by Jesus Christ, implied as such in St. Mark's Gospel ( Mk 6:13), and recommended to the faithful by the apostle St. James: Is any among you sick? Let him call for the elders of the church, and let them pray over him, anointing him with oil in the name of the Lord; and the prayer of faith will save the sick man, and the Lord will raise him up; and if he has committed sins, he will be forgiven (Jas 5:14-15). The Church's living tradition, reflected in texts of the Magisterium, has seen in this rite, especially dedicated to comforting the sick and purifying them from sin and its consequences, one of the seven sacraments of the New Law. [1]

Christian meaning of suffering, death and preparing for a good death

In the Ritual for the Anointing of the Sick, the meaning of human suffering and death is explained in the light of God's salvific plan, and more specifically in the light of the salvific value of the sufferings undergone by Christ, the Incarnate Word, in the mystery of his passion, death and resurrection. [2] As the Catechism of the Catholic Church teaches: “By his passion and death on the cross Christ has given a new meaning to suffering: it can henceforth configure us to him and unite us with his redemptive Passion" (CCC , 1505). “Christ invites his disciples to follow him by taking up their cross in their turn (cf. Mt 10:38). By following him they acquire a new outlook on illness and the sick" (CCC, 1506).

Sacred Scripture points to a close relationship between sickness and death, and sin. [3] But it would be a mistake to think of sickness as a punishment for personal sins ( Jn 9:3). The meaning of innocent suffering can only be understood by the light of faith, believing firmly in the Goodness and Wisdom of God, in his loving Providence, and contemplating the mystery of Christ's passion, death and resurrection, thanks to which the Redemption of the world became possible. [4]

Our Lord taught us the positive value of suffering for carrying out the Redemption, but at the same time he wanted to cure many sick people, showing his power over suffering and illness and, above all, his power to forgive sins (cf. Mt 9:2-7). After the Resurrection he sent out his apostles: In my name … they will lay their hands on the sick, and they will recover (Mk 16: 17-18) (cf. CCC , 1507). [5]

For a Christian sickness and death can and should be a means to seek holiness and to redeem with Christ. The sacrament of the Anointing of the Sick helps us to live these sorrowful realities of human life with a Christian sense. “In the Anointing of the Sick, as Extreme Unction is now called, we find a loving preparation for the journey which ends in the Father's house." [6]

According to Ritual for the Anointing of the Sick, the appropriate matter for the sacrament is olive oil, or in case of necessity, vegetable oil. [7] This oil should be blessed by the bishop or by a priest with this faculty. [8]

The anointing is done on the forehead and the hands. [9] The sacramental form of words in the Latin rite by which the sacrament is conferred is as follows: Per istam sanctam Unctionem et suam piisimam misericordiam adiuvet te Dominus gratia Spiritus Sancti, / ut a peccatis liberatum te salvet atque propitius allevet . “Through this holy anointing may the Lord in his love and mercy help you with the grace of the Holy Spirit. / May the Lord who frees you from sin save you and raise you up." [10]

3. Minister of the Anointing of the Sick

The minister of this sacrament must be a priest or bishop. [11] Pastors have the duty to instruct the faithful about the benefits of this sacrament. The faithful (particularly family members and friends) should encourage sick people to call for the priest so that they can receive the Anointing of the Sick (cf. CCC, 1516).

The faithful should keep in mind the tendency today to “isolate" those who are sick and dying. In hospitals and clinics people often die 'alone' even though they may be surrounded by others in an intensive care unit. Everyone—especially Christians who work in hospitals and hospices—should strive to ensure that seriously ill people receive every possible assistance to relieve their suffering in body and soul. And an important means (besides the sacrament of Penance and Viaticum) is the sacrament of the Anointing of the Sick.

4. Subject of the Anointing of the Sick

The Anointing of the Sick is meant for all those who have been baptized, have reached the age of reason and are in danger of death from serious illness or from old age as they become increasingly frail. [12] It cannot be administered to someone after death.

The subject must have at least the habitual and implicit intention to receive the sacrament. [14] In other words, the sick person must have the desire (never having expressed otherwise) to die a good Christian death, with the supernatural help that this entails.

Even though the Anointing of the Sick can be administered to those already unconscious, every effort should be made to administer it while they are still conscious, so that they can better prepare to receive the grace of the sacrament. It should not be given to those who remain obstinately impenitent in public mortal sin (Code of Canon Law , canon 1007).

If someone who has been anointed recovers from their illness they can be anointed again in the case of a new serious illness, and the sacrament can also be repeated during the same illness if the person's situation again deteriorates (cf. Code of Canon Law , canon, 1004, 2).

Finally, the Church sets down that “if there is any doubt as to whether the sick person has reached the age of reason, or is dangerously ill, or is dead, this sacrament is to be administered" (Code of Canon Law, canon 1005).

5. Necessity of this sacrament

The reception of this sacrament is not essential in the sense of being necessary for salvation, but neither should it be voluntarily disregarded if it is possible to receive it, for that would amount to refusing a help of great value for salvation. To deny this help to a seriously ill person could amount to a serious sin.

6. Effects of the Anointing the Sick

—the peace and strength to overcome the difficulties and sufferings of a serious illness or the frailty of old age (cf. CCC , 1520, 1532);

—the healing of the wounds of sin and the forgiveness of all venial sins, as well as mortal sins when the person is repentant but unable to receive the sacrament of Penance (cf. CCC , 1520);

—preparation for the passage to eternal life. As the Catechism of the Catholic Church teaches: “This grace is a gift of the Holy Spirit, who renews trust and faith in God and strengthens against the temptations of the evil one, the temptation to discouragement and anguish in the face of death (cf. Heb 2:15)" ( CCC , 1520).

[5] Of itself suffering does not save or redeem. Only illness accepted with faith, hope and love for God, in union with Christ, purifies and redeems. It is Christ who saves us, not through suffering but by suffering transformed into prayer as a 'spiritual sacrifice' ( Rom 12:1; 1 Pet . 2:4-5), which we can offer to God, uniting ourselves to Christ's Redemptive Sacrifice, made present in each celebration of the Eucharist so that we can share in it.

In addition it is good to bear in mind that “it is part of God's providential plan that we fight ardently against any infirmity and diligently seek health, so that we may continue fulfilling our roles in society and the Church, as long as we are always ready to complete what is lacking in Christ's Passion for the salvation of the world, hoping for the glorious freedom of the children of God (cf. Col 1:24 ; Rom 8:19-21)" ( Ritual for the Anointing of the Sick, Introduction , 3).

[9] According to the same document (no. 23), in case of necessity it is sufficient to anoint just the forehead or another convenient part of the body.

[14] The Code of Canon Law states: “This sacrament is to be administered to the sick who, when they were in possession of their faculties, at least implicitly asked for it" (canon 1006).

Anointing of the Sick