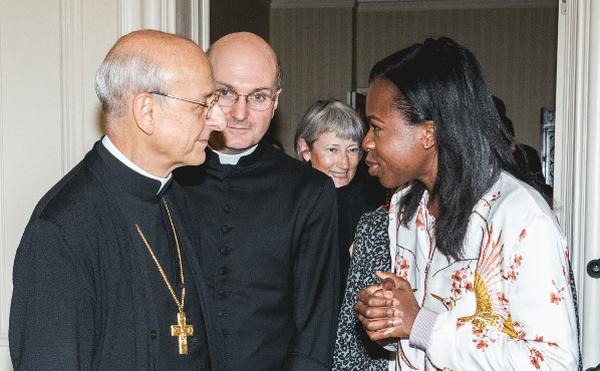 The Prelate of Opus Dei has begun an intense pastoral visit to Britain to spend time with his spiritual children in this land. After arriving at Gatwick airport on Thursday evening, Mgr Fernando Ocáriz went straight to the prelature’s Regional Commission in Bayswater, West London. The Prelate, known always as “Father” in Opus Dei, wanted this to be a particularly family occasion in which he could spend time with as many members as possible.

On Friday morning he celebrated Mass and preached in the Commission and had meetings with Opus Dei directors, both men and women, encouraging them to carry out their work with a deep spirit of service. He then had a meeting in Chelsea with a numerous group of women members.

In an afternoon meeting with diocesan priests, the Prelate encouraged them to focus on Christ

After lunch, the Father went to visit Cardinal Vincent Nichols, the Archbishop of Westminster, who welcomed him very warmly. Then in an afternoon meeting with diocesan priests, the Prelate encouraged them to focus on Christ, centred on the Eucharist and the gospel and to love their brothers in the priesthood. He urged them to be very welcoming with people, particularly in the confessional, so that they want to return, but this in turn arises from the priest’s contact with Jesus. 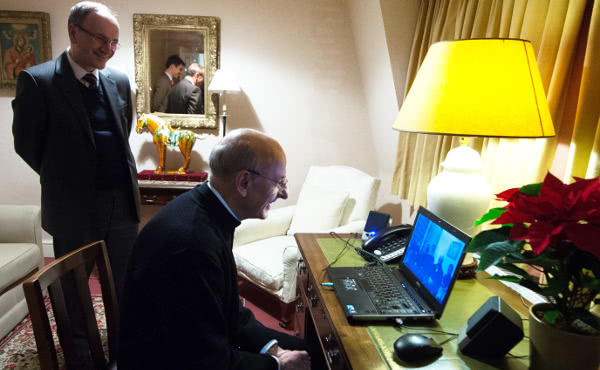 The Father then met with a group of men and women involved in PACT, a charitable body which runs a series of schools in South London inspired by the spirit of Opus Dei. They gave presentations to him about the schools and outlined the key principles behind them, centred on helping parents in their role as the prime educators of their children and transmitting authentic Catholic teaching and life throughout the whole curriculum. The Father spoke of how "enormously important" it is to form a human person and encouraged them always to rely on prayer.

This meeting was immediately followed by one with couples promoting the Family Development Foundation (FDF) and its programmes in Britain. The FDF seeks to support marriage and family life by teaching good communication between the spouses and the art and science of good parenting, based on the case method. The Father talked of the pressures families are facing today and said that, although difficulties will never be lacking, they can be overcome if we persevere. He said that supporting the family was a priority in every country.

In an evening get-together with a large group of Opus Dei members, the Father once again insisted on always putting Jesus Christ at the centre of all we do. He also spoke of his over 20 years working alongside Bishop Javier Echeverria, his predecessor as Prelate of Opus Dei until the latter’s death just over a year ago. The Father said that Bishop Javier lived for his spiritual sons and daughters and didn't even seem to have personal interests. He always gave people time and never seemed in a hurry.

The Father encouraged his listeners both to accept the limitations of the people they live with and also their own. And answering a question about freedom, he explained that freedom is not so much choosing as how we choose. There are many things we have to do but we can choose to do them freely for love, even if we don’t like doing them, and this brings joy. Speaking about evangelisation, he encouraged the members always to transmit the truth with love, forming authentic friendships. And he insisted that whatever happens we have no reason to be unhappy because Our Lord loves us crazily.