The Boys, the Cow and my Mum

"They were street kids. Some lived in shanties with their parents, five in a room. Others were orphans and slept wherever they could." The Eastlands project in Nairobi is having a big impact on many young people in Kenya.

The cow of my aunt was due to give birth one night recently. My aunt is a widow, elderly and diabetic. The eight boys who live on the neighbouring farm offered to help.

They told her to go to bed and they would look after the delivery. She was overjoyed at this offer and at how these boys can handle this situation now as she is feeling the weight of her years. Her only cow is quite a treasure and an important source of income. Her own children have long since moved to the city and so she has no one to help with the usual farm chores. The development of these neighbouring fellows to the stage when they can deliver the calf is a new milestone.

The farm land is a lush area about two hours outside Nairobi. It is one of the best farming areas in the country and quite beautiful. The area has many small “shambas” or farms, for growing tea, and keeping cows and a few chickens. As there is not much land for grazing, the system used is “zero grazing.” In this system you have the cow confined to a small space from which it is fed. It is an economical system as in this way small farmers do not need much land in order to keep cows.

The kids from the neighbouring farm of my aunt are no ordinary kids. They come from a slum area of Nairobi. I first met them when we were surveying the land which would be bought for a technical school in Eastlands. The school will be called The Eastlands College of Technology, a corporate undertaking of Opus Dei in the outskirts of Nairobi. The first phase will be aimed at training workers in the "informal sector" (the Kenyan term for street vendors who seek to improve their living conditions by offering housewares for sale), and will eventually expand into a large school of technology providing training in skills needed for Kenya's rapidly expanding industries. 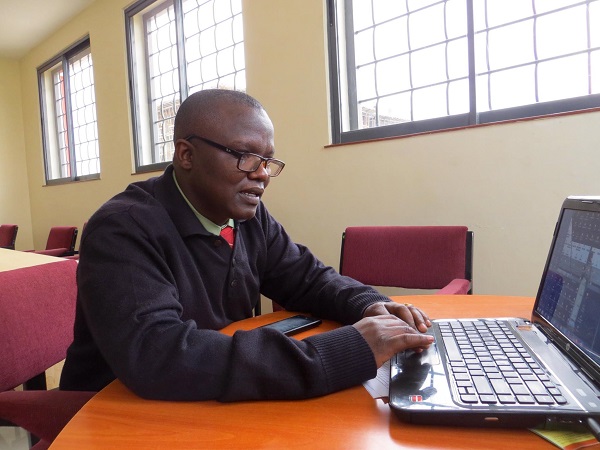 They were street kids. Some lived in shanties with their parents, five in a room, with a clay floor and a corrugated iron roof. Others were orphans and slept wherever they could, some on the side of the road, some in a hole in the ground with a plastic cover for a roof when it rained which was often. They survived by collecting scrap metal, newspapers and plastic bottles and managed to eke out a living in this way. Usually they would have only one meal a day and so were always hungry.

As I got to know them and their situation a bit better, some friends and I tried to see how we could help them. We realized that these were the kind of kids that we wanted to target for the future technical school. Some had been to primary school; others had missed many years through lack of fees. Most of them know nothing about religion or God. They were reminiscent of the kids that St Josemaría met in the poor barrios of Madrid in the 30s, except this was now Nairobi almost a century later. The historical and geographical realities of this encounter in some ways were a manifestation of how the spirit of St Josemaría has spread and of its universal application. Only because of my formation and vocation to Opus Dei was I interested in these fellows. As St Josemaría taught us: out of 100 souls we are interested in 100!

Over time we managed to set up a shelter for them so that at least they had a roof over their heads. We then tried to get some back into school. From regular encounters we had some formative talks. There were ups and downs, successes and failures. It also became apparent that if we were to make real progress the best thing would be to get them out of the environment of the slum. Recently there was a big fire, which made global news, precisely in the area of the slum that they come from. Many of their friends and people they knew were killed in that fire.

I come from a family of eleven. My father passed away a few years ago and so my mother is alone. Many in my family are in Opus Dei. I convinced my Mum that it would be a good idea to give shelter to a selected group of these kids as an experiment. My mother can neither read nor write but having raised a large family in tough circumstances, she was willing to give it a try. We started with some apprehension and there were many adjustments to be made, not least of which was the fact that these kids speak a different dialect from that of my mother and so initially they had to communicate by sign language. I work in Nairobi, quite some distance away, which meant I could only be in contact by phone.

We managed to get some school fees from generous people. We also got clothes for the boys from local well wishers, but they needed absolutely everything. Where I come from even a pencil is a treasure, not to mention a notebook. So they began to attend the local school. Anthony, James and many other Associate members of my centre asked their colleagues and friends to help. Strathmore Business School students produced a lot. Patrick, another Moses, and others gave technical input. Dennis, a non Catholic graduate from Eastlands Centre together with many young fellows gave their time and energy at different stages and in different ways.

My mother, being an experienced farm manager and self-trained psychologist, made sure they had no spare time. After school they had to collect the Napier grass for the cow, milk the cow, feed the chickens, sweep the yard, and pick the tea and a host of other things. We were apprehensive at first to see how things would work out for these city kids with their new and demanding task master. Some did not last and returned to Nairobi to their old life but the majority decided to stay.

The first thing they noticed was the difference in having three meals a day, even though they were simple meals. They were also overjoyed at the prospect of going to school and immensely aware of so many others whom they knew did not have this opportunity and privilege. 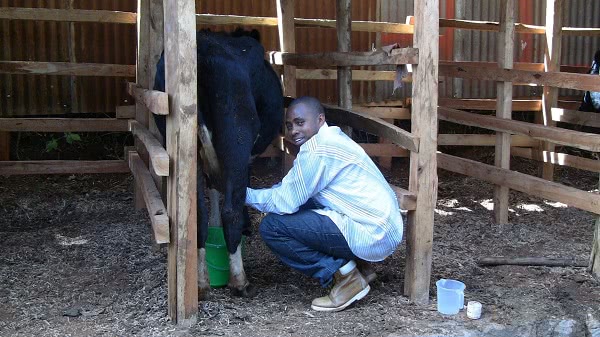 We then began to notice that my mother would occasionally come for visits to Nairobi and leave the fellows in charge of the farm. This was a sign that she liked them and trusted them. A new stage had been reached. There was slight hiccup when after one of these trips she discovered feathers of a chicken that had not been sufficiently well hidden after being killed. The official story was that it was hit by a football during an ongoing soccer match and so it had to be eaten! This led us to wonder whether Wayne Rooney could hit a moving chicken with a soccer ball!

Among the group, leaders began to emerge who could be counted on to give good example to the others.My mother encouraged them to go to Mass every Sunday when the priest was visiting in the local chapel. Those that had no religion when asked if they wanted to go to church had replied that they wanted to go to the “Church of Moses” (my name is Moses). Many are now receiving catechism classes gladly and they are little by little getting to know the Christian faith. I pray they may want to be baptized soon. When passing by their room recently I was surprised to hear them reciting the Rosary on their own, it was a nice feeling. Last August they painted the fence of the local church, again under the careful supervision of my Mum!

They are eager to learn, all have done well at school.Two of them are at the top of their class, four or five look like they could make it to university, two others are class captains or class prefects, and one is the captain of the soccer team. My mum, whom they call shushu, Kikuyu for grandmother, makes sure they can look after themselves, so they all have learnt to cook, particularly their favourite dishes: ugali and chapati which are common local dishes.

One of the boys says he can run the 100 metres barefoot in less than 10 seconds, another, at sixteen years of age, runs the 10,000 metres pretty well. The coming year will see whether these claims and achievements stand up to international scrutiny.

My mom keeps them busy during the holidays but there is also time for soccer. They can watch the small and old TV only during the holidays. We have also encouraged them to see how they can help the other local, mainly elderly farmers. Accompanying cows in labour for elderly farmers is not one of the traditional corporal works of mercy but if St Matthew had lived in Muranga it might have been! This is a new start and we are hopeful for similar developments in the future.

Apart from those that live with my Mum we have another eight boys who are in boarding schools. They all want to come to stay in Muranga during the holidays. The place is much more attractive than the slum areas of Nairobi. Certainly, the greatest attraction for them is the prospect of having three meals a day!

One of them asked recently if when they finish school they will all be able to stay together. They feel they are a family.

We dream of helping them with further studies but also pray that somehow this reality that has mysteriously come about, is just a small sideshow of the impact the Eastlands College of Technology will have in the area. We pray the construction of the definitive buildings of the College may start soon and that such stories may be multiplied by hundreds. It is a beautiful story and every time I think of it I realize that this would not have been possible if we had not known the teachings of St Josemaría. There is no time to waste, and while the buildings are still in the design stage, Eastlands is growing towards the insight.