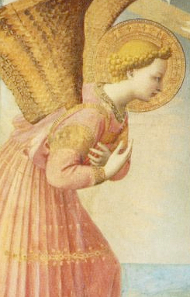 The Angel Gabriel And sent him to The Virgin Mary,