A brief account of Saint Josemaria's last visit to the Grotto at Lourdes, on 3 October 1972, before embarking on a two month catechetical trip through the Iberian peninsula.

In the above video, in Barcelona on 26 November 1972, Saint Josemaria speaks about his short but intense visits to the shrine of Our Lady of Lourdes.

The book At God’s Pace by François Gondrand contains a brief account of his last visit to the shrine of Lourdes, on 3 October 1972.

Saint Josemaria had just landed at Tarbes airport, not far from Lourdes. A few of his French and Spanish sons had come to meet him there before he went on to Hendaye and from there into Spain. He intended to spend several weeks in the Iberian peninsula and meet a large number of people. First, on October 7th, he would preside at a ceremony during which he was to award honorary doctorates of the University of Navarre to a German professor of medicine, Erich Letterer, a Spanish art historian, the Marquis of Lozoya, and a French legal historian, Professor Ourliac, a member of the Institute of France.

Soon, as they passed in front of the basilica of Lourdes, the Father spoke of the miracles that were starting to happen at Torreciudad, on the other side of the Pyrenees, even before the shrine and the other buildings were finished: confessions, conversions, decisions to give more to Our Lord… all the miracles of grace he had thought of when he gave the word for the construction work to begin. 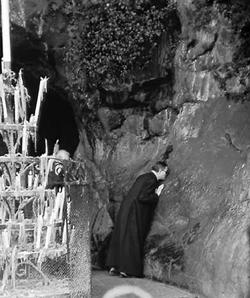 The Father walked briskly to the grotto. As always when in Lourdes, he stopped to drink the spring water. Then he went towards the site of the apparitions, where a ceremony was about to start. As soon as he saw the statue of the Virgin of the Rosary, he knelt on the ground; after a short and intense time of prayer, he rose and returned across the esplanade.

The Father said farewell to his French sons and got back into the car. Before drinking the miraculous water, he had remarked to those around him that he was asking nothing of the Blessed Virgin for himself, not even for his health. But his sons were not surprised, for they were well aware of the motive for this detour to the place where on 11 December 1937 he had said Mass after his memorable crossing of the Pyrenees. It was the same motive as on the previous pilgrimages he had made to Lourdes, to Sonsoles in Avila, Spain, to El Pilar in Saragossa, to the Basilica of Our Lady of Ransom in Barcelona, to Our Lady of Willesden in London, to Einsiedeln in Switzerland and to Loreto in Italy. And to Torreciudad in 1970, to Fatima in Portugal, to Guadalupe in Mexico…

Praying in these famous places of pilgrimage, he had asked Our Lady for peace for the Church, peace for the world, for the perseverance of his sons and daughters and the fruitfulness of the apostolates of the Work. Now, more than ever, the Church was his first concern, urging him as it did towards further plans for making reparation and for strengthening the faith of his children, both when they visited him in Rome and when he met them on his journeys. Previously, he had customarily avoided talking to very large groups, but now he felt a burning desire to speak about God directly to the largest possible number of people, to set them on the way to deepening their Christian lives. But for him the apostolate would always be, as he had written long ago in The Way, the fruit of prayer, which grows in value with sacrifice. He frequently repeated the words of a liturgical prayer he had often used when he was young: “Ure igne Sancti Spiritus – Lord, burn us with the fire of your Holy Spirit; burn our hearts and our innermost being…”

"Lord, burn us with the fire of your Holy Spirit; burn our hearts and our innermost being…"

This plea to the Holy Spirit was prompted by his desire to be constantly close to the Holy Family of Nazareth, the “trinity on earth,” as he called them. “If we want to become intimate friends with our Lord and our heavenly Mother, we must listen to Saint Joseph,” he said.

At Saint Joseph’s side his soul came close to Mary, and through her to Jesus, God made Man. And Jesus introduced him into the mystery of the Blessed Trinity. This was how, according to his own words, he went from the trinity on earth to the Trinity of heaven, by the “way of childhood” of which the great mystics have spoken. It is a path “whose difficult easiness demands that the soul start and continue led by the hand of God,” and which demands “the submission of the understanding, more difficult than the submission of the will.”