An article by Bishop Javier Echevarría on the canonization of Mother Teresa of Calcutta. "It was contemplation of the Eucharist that led Teresa of Calcutta to recognize Christ in those who were poor, sick or alone," the Prelate tells us. 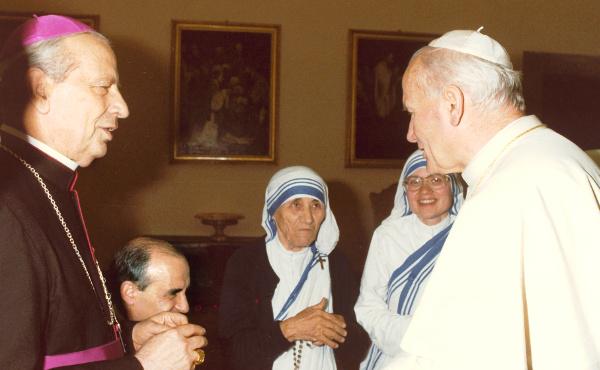 The canonization of Blessed Teresa of Calcutta is a joyful feast for the Church and all mankind. Since her death, the spiritual stature of this extraordinary woman has been becoming ever clearer to the benefit of so many souls.

In 2003, Saint John Paul II invited all of us to reflect on her message of service and charity. How much good comes from getting to know her biography, her writings and thoughts. The untiring generosity of Mother Teresa of Calcutta is a strong spur to learn to live for others.

During the times I had a chance to be with Mother Teresa, I saw how she was becoming more and more bent over as time went by, as can happen to us when we get older. Her particular vocation as a missionary of God’s charity led her to continuously bend over spiritually to welcome an abandoned person or cure wounds of body or soul. It was as though her spiritual “bending over” the poor and sick was also becoming physical. 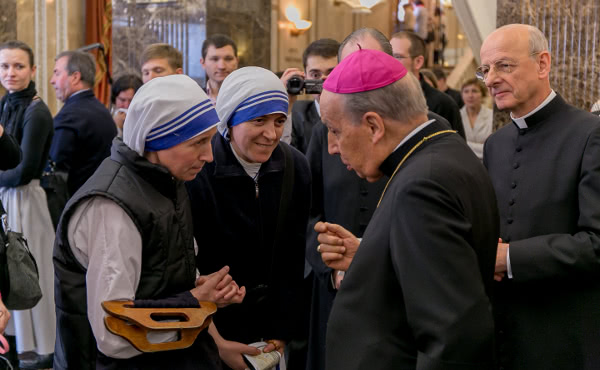 It was contemplation of the Eucharist that led Teresa of Calcutta to recognize Christ in those who were poor, sick or alone, since she had deeply assimilated those words of our Lord: Truly, I say to you, as you did it to one of the least of these my brethren, you did it to me (Mt 25:40).

This explains why, along with the required physical assistance, she poured out so much affection for the most needy, and showed such great compassion for orphans and the unborn. We can recall here her defense of life (which we too are all engaged in), when on receiving the Nobel Peace Prize in 1979 she made reference to the drama of abortion, and offered to look after unwanted children who are born.

All of this Christian way of acting provides a lot of light for overcoming the short-sightedness of human calculations and personal interests. She saw in humanity a family, and in the world a common home that any upright person needs to be concerned about.

After receiving the Nobel Peace Prize, Mother Teresa was asked what an ordinary person can do to further peace in the world. She replied: “Go home and love your family.” The challenge, for many Christians, will be to bring Saint Teresa of Calcutta’s apostolic eagerness into the ambit of their ordinary activities: to “lean over,” to place themselves at the service of the others and thus to spread the Gospel and Christ’s charity to all environments. In short, as Pope Francis said, to realize we are instruments of God’s charity for all the creatures on this earth (cf. Laudato Si’, no. 246).