Pilgrimage to Our Lady of the Pillar

"My devotion to Our Lady of the Pillar has always accompanied me: my parents, with their Aragonese piety, instilled it in my soul since I was a child" - St. Josemaría. 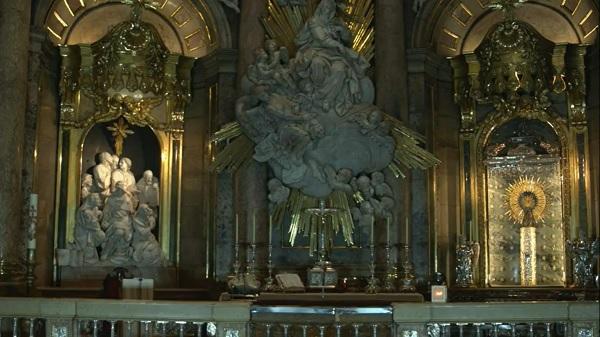 Our Lady of the Pillar is one of the oldest Marian invocations. According to tradition, when the Mother of Jesus was still living in Jerusalem, Saint James the Greater saw her arrive in mortal flesh on the banks of the Ebro River, accompanied by a group of angels carrying a column.

The Apostle had been one of the first to travel to the western confines of Europe — the Iberian Peninsula, the finis terrae, then part of the Roman Empire — to preach the Gospel. St. James the Apostle was downcast by the difficult work and Mary Most Holy wanted to show her motherly care by appearing and encouraging him. According to the same tradition, St. James received from the Virgin the order to build a chapel in her honour in the place of the apparition.

Today the column of the apparition is preserved in the Basilica of Pilar in Saragossa, and visitors have venerated it throughout the centuries. The carving of the Virgin is not even forty centimetres high. Its lines are late Gothic, and by the way the tunic is buttoned, the belt with its buckle, the high waist and the shoes, it can be dated to the 15th century. The figure of the Baby Jesus does not follow the sculptural style of the Virgin and was undoubtedly added to the latter, either to complete it or, more probably, to replace a previous one that was destroyed or deteriorated. He holds a little bird in one hand and with the other he clings tightly to his Mother's mantle. The ensemble sits on the Pillar, which is a smooth jasper column covered with worked silver that (+except on the 2nd, 12th and 20th of each month) lights up with an embroidered mantle, which is changed daily. 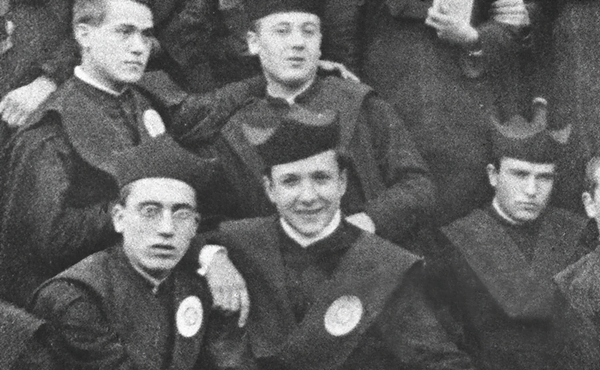 Our Lady of the Pillar in Saint Josemaría's Life

"My devotion to Our Lady of Pilar has always accompanied me: my parents, with their Aragonese piety, instilled it in my soul since I was a child," said St. Josemaría.

In 1909, when he was seven years old and went to the Piarist school in Barbastro, they used to sing the popular invocation to our Lady: Blessed and praised be the hour when Mary Most Holy came in mortal flesh to Saragossa... And this devotion accompanied him until the end of his life.

In Rome, in the bedroom that he used, there are two built-in shelves where, in the last two or three years of his life, he kept a small image of the Virgin of the Pillar that he kissed every morning when he woke up; and in his office, on a dark desk, there is another life-size representation of this invocation.

During the years Saint Josemaria spent in Saragossa, in the seminary and studying civil law, he visited the Pilar every day. "As I had good friendship with several of the clergymen who looked after the Basilica, I was able to stay in the church one day after the doors had closed. I went to Our Lady, with the complicity of one of those good priests who has already passed away, and climbed the few stairs that the infantrymen know so well. As I approached, I kissed the image of Our Mother. I knew that this was not the custom, that kissing the mantle was allowed exclusively to children and to the authorities (...). However, I was and am sure that my Mother of the Pillar was happy that for once I skipped the established customs in her cathedral. I continue to treat her with filial love. With the same faith with which I invoked her in those times, around the 1920s, when the Lord made me sense what he expected of me: with that same faith I invoke her now (...). Under his protection, I continue to be happy and secure". That prayer before our Lady of the Pillar, asking him to see and be what God wanted for him, prepared the foundation of Opus Dei.

St. Josemaría celebrated his first solemn Mass in the Chapel of the Pillar in Saragossa. When he moved to Madrid and, years later, to Rome, he continued to visit Our Lady of the Pillar whenever he could. The last time was on April 7, 1970.

A phrase of St. Josemaría, found in the Book of Aragon, recalls that "the Pillar is a sign of strength in faith, in love, in hope.”

You can "go" to the sanctuary from here. Every day the Angelus is prayed at 12 noon, and the Holy Rosary at 7 pm, after which there is a responsory for the dead.