Homily from the Mass of ordination for 29 faithful of Opus Dei as transitional deacons in Rome on November 9th. They will be ordained priests on May 23, 2020. 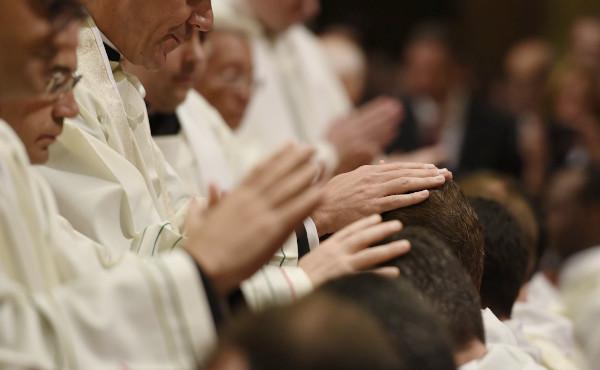 "Serving, serving: this is the key, my dear brothers. For a priest or deacon, serving is like breathing. A priest who doesn't like to serve is like a doctor who's scared of blood."

Bishop Philippe Jean-Charles Jourdan, Apostolic Administrator of Estonia, directed these words to the 29 men that he ordained deacons this past Saturday in Rome. Bishop Jourdan is the second bishop Estonia has had since the Protestant reformation in the 16th century. Full text of his homily below.

Homily of Bishop Philippe Jourdan in the Basilica of Saint Eugene (Rome), 9 November 2019

First of all, my deepest gratitude to the Father, Monsignor Fernando Ocáriz, Prelate of Opus Dei, for his invitation to come and ordain 29 of his sons as deacons. Besides the family joy that they feel—that all of us who are members of the Work feel on a day like today—you can imagine what it means for me, as a bishop from northern Europe, to ordain more people in a single day than we ordain over the course of several years in all the "cold villages of northern Europe" as Saint Josemaría used to say. May God allow an abundant harvest to be reaped there as well. At the same time, we give thanks for these new laborers in the Lord's vineyard.

Allow me to recall what Pope Francis said during Holy Mass at the Freedom Square in Tallinn (Estonia): "See how the eagle helps its chicks learn to fly: she flies with them and under them, to protect them from falling. This is how you have to live, accompanying everyone, especially non-believers who make up the majority of your country."

Serving, serving: this is the key, my dear brothers. For a priest or deacon, serving is like breathing. A priest who doesn't like to serve is like a doctor who's scared of blood. A doctor who is scared of blood might try to study the history of medicine, for example, but generally we can say that being a doctor does not seem like the ideal path for him.

Dear brothers, serving is like the blood of our priesthood. You might be afraid of blood, but blood is the price to pay in order to be useful. Saint Josemaría gave us this joyful motto: "In order to be useful, serve." This can be understood in many different ways. For me, it simply means that you are never as useful as when you are serving in exactly what has been asked of you, without seeking personal programs or goals.

Now allow me to share a personal memory. When I arrived in Estonia for the first time, I had prepared myself to answer all the questions that the people there were going to ask me, the deep ones and the not-so-deep ones. But I hadn't prepared for the only question they ended up asking me: "Do you want to play a game of soccer?" I really didn't want to. I was tired and I was never a very good soccer player, but I told myself that I couldn't say no to the first and only question they asked me. I thought, "Wow, these Estonians are really devoted to soccer!" So I said yes, I would play. Later on I learned that Estonians don't like soccer very much. I may have been the first French person they had met and they didn't know how to connect with me. It was around the time of Zidane and Platini, and they thought: "Surely a Frenchman would like to play a game of soccer, even if it is dark, raining, and cold." So no one actually wanted to play, but we all went to play in order to serve the others as we thought they wanted to be served. And the match was wonderful, even though I accidentally broke the leg of a woman who was playing goal-keeper.