On February 25 in Rome, two faithul of the Prelature were ordained to the diaconate in the parish of Saint Josemaria. They were ordained by Bishop Juan Ignacio Arrieta, secretary of the Pontifical Council for Legislative Texts. They will be ordained priests in 6 months time. 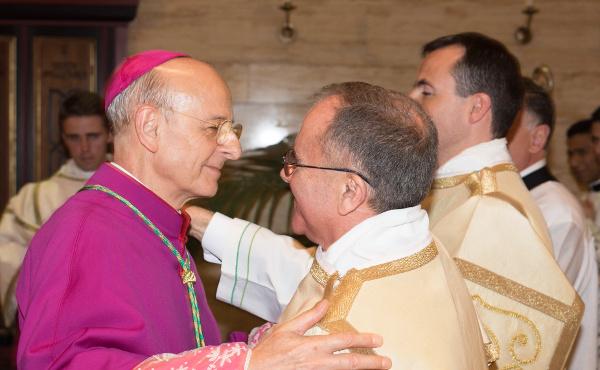 The Prelate of Opus Dei greets the new deacons.

The two new deacons are Ginés José Pérez Almela and Arturo Garralón Blas. Some photos are found below:

Ginés José Pérez was born in 1958, in Murcia (Spain). After earning a degree in Educational Sciences at the University of Murcia, he worked for more than 30 years in Monteagudo high school.

Arturo Garralón was born in Guadalajara (Spain), in 1975. He studied Economics at the University of Alcalá de Henares and worked for the banking group La Caixa.

The Catechism of the Catholic Church teaches that the tasks of deacons include, among others, that of assisting "the bishop and priest in the celebration of the divine mysteries, above all the Eucharist, in the distribution of Holy Communion, in assisting at and blessing marriages, in the proclamation of the Gospel and preaching, in presiding over funerals, and in dedicating themselves to the various ministries of charity" (CCC 1570).

During the ordination ceremony, Arturo had to use crutches since he injured his leg when hit by a car last November, and will need several months to recover.