Life of Mary (XV): Beside the Cross of Jesus

“Beside the Cross of Jesus were his mother, his mother’s sister, Mary of Cleophas, and Mary Magdalene” (Jn 19:25).

Almost three years have gone by since Jesus' first miracle, in Cana of Galilee. The Gospel hardly mentions our Lady during that long interval. On some occasions, she may have been part of the group of women who accompanied Christ on his journeys (cf. Lk 8:1-3). Nevertheless, the evangelists mention his Mother's presence only once, when she came to see Jesus accompanied by other relatives. Unable to enter the house where Jesus was because of the large crowd, they announced their presence and asked to see him. Our Lord's response was eloquent: Who is my mother and who are my brethren? " And looking at those seated around him, he said: Here are my mother and my brethren, for whoever does the will of God is my brother and sister and mother (Mk 3:33-35). This was the highest praise possible of our Lady, the person who best fulfilled the heavenly Father's will.

[During Jesus' public life], Mary followed Him from afar, even as she was spiritually united to Him at every moment, much closer than the disciples and the holy women.

The silence of the Gospels leads us to assume (as Pope John Paul II said in his Marian catechesis) that our Lady ordinarily did not accompany her Son on his travels around Palestine. Mary followed Him from afar, even as she was spiritually united to Him at every moment, much closer than the disciples and the holy women. In any case, John makes clear that she was in Jerusalem during her Son's final Passover. Our Lady may have been in the Holy City on similar occasions, but the evangelist only now expressly mentions it, and in the context of the Redemptive Sacrifice: Beside the Cross of Jesus were his mother, his mother's sister, Mary of Cleophas, and Mary Magdalene (Jn 19:25). Right after this John records the words Christ spoke to his Mother and to him—words of immense significance. 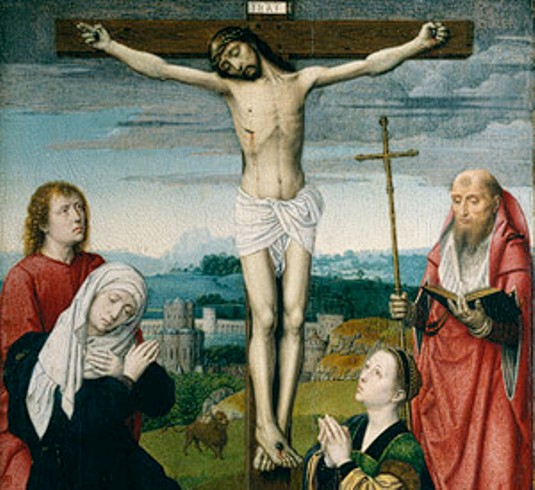 Seeing our Lord's words here, at the supreme moment of the Redemption, as simply the concern of a son for the care of his mother he is leaving behind, would mean missing the essential point. Rather we find here one of the keys for understanding our Lady's role in the work of salvation. Already in Cana Jesus had made it clear that Mary's maternal mission in Nazareth, during the years of his hidden life, would be prolonged in the new family of his Church. Recent studies in Mariology stress (as the ordinary magisterium of the Church has also affirmed) that we have before us here a “revelation scene" typical of the fourth Gospel, the “Gospel of signs" par excellence. Jesus addresses his Mother as “woman," as at Cana of Galilee, and says with reference to the beloved disciple: Woman, behold your son! (Jn 19:26). Then looking at John, Christ says: Behold your mother! (Jn 19:27).

Mary is the new Eve who, united to the new Adam and subordinate to Him, is called to incorporate her maternal mediation into the work of the redemption.

Neither Mary nor John is addressed by their name. Mary is the new Eve who, united to the new Adam and subordinate to Him, is called to incorporate her maternal mediation into the work of the redemption. And the evangelist is present there as the faithful disciple, representing all those who will come to believe in Christ until the end of time. Our Lord's words—words of God and therefore creative words like those at the beginning of the world—do what they signify. From that moment, Mary is made Mother of all who will come to the Church: Mater Ecclesiae, as Paul VI called her at the close of Vatican Council II. Her womb will be fruitful with a new motherhood, one that is spiritual but real. And it will be a painful one, because the prophecy of the old man Simeon is being fulfilled to the letter: a sword will pierce through your own soul also (Lk 2:35).

Moreover, in the disciple's heart the awareness arose that he was truly a child, a brother of Jesus and son of the same Mother. Thus as John adds: from that moment, the disciple took her into his home (Jn 19:27). That is, he welcomed her into his interior life, as a true Mother, counting her among his most precious goods. From then until the moment of the Holy Virgin's Dormition (her “falling asleep in the Lord"), John would never be separated from her.

Only after giving the disciple to the Mother, and the Mother to the disciple, could Jesus say that everything is consummated, as St. John expressly tells us. After saying “I thirst," to fulfill the Scriptures (a thirst above all for souls), Jesus cries out in a loud voice: consummatum est!, everything is fulfilled. And bowing his head, he gave up his spirit (Jn 19:30).

Beside the Cross of Jesus: Magisterium Saints, Poets