Pilgrimage to the Holy House of Loreto

St. Josemaría considered himself especially indebted to Our Lady of Loreto for a very serious need that he placed under Our Lady's mantle on August 15, 1951. 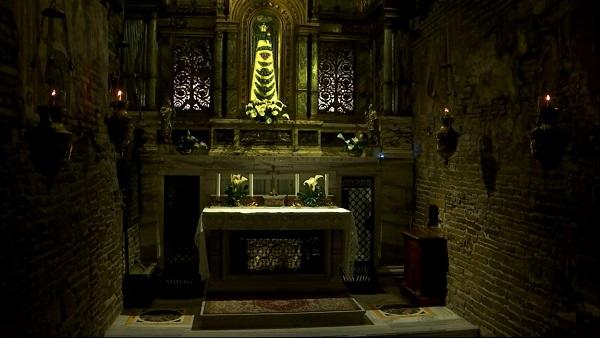 The house in Loreto (Italy) believed to be a part of Mary's house in Nazareth.

At this link, you can visit the interior of the holy house every day from 9.00 am to 6.00 pm when the sanctuary is open.

The house in which Our Lady would have received the Angel Gabriel's announcement has been the object of special devotion for centuries. Two cities seemed to dispute the privilege of preserving that holy place: Nazareth, in Palestine, and a town called Loreto on the Adriatic coast of Italy, almost thirty kilometers from the city of Ancona.

The conscientious work of archaeologists and historians, examining findings from the excavations and studying the documentary sources, has solved the seeming enigma with the conclusion that the two traditions are perfectly reconcilable. They are two parts of the same house: the inner part, which looks like a cave, is still worshipped in the Basilica of the Annunciation in Nazareth, while the other part, made of masonry, used to be attached to the cave and is the one in Loreto.

The two traditions are perfectly reconcilable. They are two parts of the same house.

Until the end of the 13th century, pilgrims from antiquity and the Middle Ages came to visit the House of Mary in Nazareth. A Byzantine church was built over the house, and later replaced by a basilica erected at the time of the Crusades. At the lowest point of the decline of the Christian kingdom of Palestine, in 1263, an invasion of Sultan Bajbars devastated Galilee and almost completely destroyed the Basilica of the Annunciation in Nazareth. A few years later, in 1291, the last Crusaders had to leave the Holy Land for good when the city of Acre was lost. It is on this date that the Lauretan tradition places the transfer of the Holy House. Before reaching the territory of Ancona it would have remained for a short period in Tersatto (Dalmatia).

Loreto has been and continues to be a pilgrimage destination for crowds. As at so many other Marian shrines, Our Lady has granted favours to those who, with no other possible resource on earth, have entrusted their needs to the protection of the Queen of Heaven. 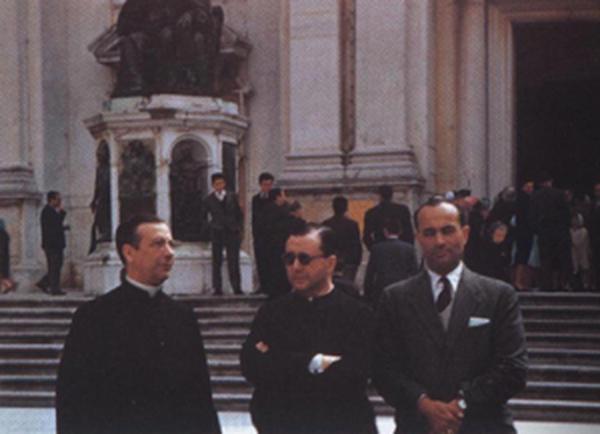 "In Loreto I am especially indebted to Our Lady"

St. Josemaría was in Loreto for the first time on January 3 and 4, 1948. He considered himself especially indebted to Our Lady of Loreto for a very serious need that he placed under our Lady's mantle three years later, on August 15, 1951.

These were moments when harsh contradictions were falling on Opus Dei and on the person of the Founder. "I suffered a lot during those years," he wrote in 1961, "I cannot hide it from you, but I must also tell you that, without any kind of miracle, Our Lord comforted me and gave me new strength every day, to defend the path, to follow his plans. (...) Not knowing who to address here on earth, I went, as always, to Heaven. On August 15, 1951, after a visit to Loreto, I made the consecration of the Work to the Most Sacred Heart of Mary."

They arrived in Loreto in the afternoon of August 14. They parked the car and quickly went to pray for a few moments before the image of Our Mother. The Basilica was full of people. He greeted Our Lady and returned to the car, smiling, fifteen or twenty minutes later.

The next day, very early, he returned to Loreto, "to celebrate Mass, and, without a specific formula, but with words of fire and full of faith," to make that consecration. At Mass, he made it in his heart, and after Mass, speaking quietly to those who were at his side, he renewed the consecration he had just made, in the name of the whole Work.

St. Josemaría had left Rome with a great suffering in his heart. When he returned from Loreto he seemed transformed. He had left that great weight that overwhelmed him at our Mother's feet, certain that she would listen to him.

A month later he wrote to the faithful of Opus Dei: "Our Lady made sure that I didn't lack, in those hard hours, the strength necessary to defend our vocation: Mary's sweetest heart, prepare for us a safe path."

The Angelus recalls the moment of the Incarnation of the Son of God.

℣. The Angel of the Lord declared unto Mary.

℟. And she conceived by the work and grace of the Holy Spirit. (Hail Mary)

℣. Behold the handmaid of the Lord.

℟. Be it done unto me according to thy word. (Hail Mary)

℣. And the Word became Flesh.

℟. And dwelt among us. (Hail Mary)

℣. Pray for us, Oh Holy Mother of God.

℟. That we may be made worthy of the promises of Our Lord Jesus Christ.

Let us pray: Pour forth we beseech thee, O Lord, Your grace into our hearts, so that we to whom the Incarnation of Your Son Jesus Christ was made known to us through the message of an angel, so that we may reach, through His Passion and His Cross, the glory of the Resurrection. Through Jesus Christ our Lord. Amen.

From this link, you can visit the interior of the holy house every day from 9.00 am to 6.00 pm when the sanctuary is open.

At this time, every day at 9 p.m. the Rosary is prayed for an end to the pandemic.