"Heed the silent voice of God over the noise of consumerism"

In his 19 December general audience, Pope Francis spoke about the true meaning of Christmas. "Christmas is the victory of humility over arrogance, of simplicity over abundance, of silence over hubbub, of prayer over 'my time,' of God over my 'I'." 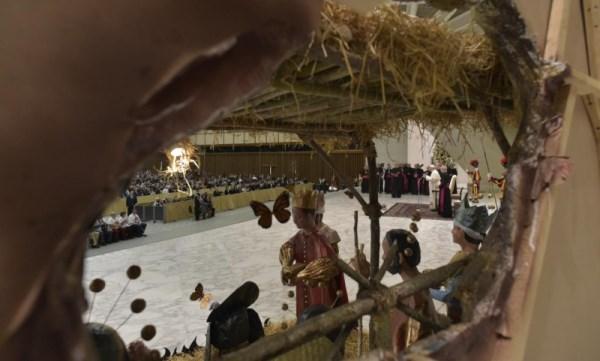 In six days’ time it will be Christmas. The trees, the decorations and the lights everywhere remind us that this year too it will be a feast. The advertising machine invites us to exchange ever new gifts to surprise each other. But I wonder, is this the feast that God likes? What Christmas would He want, which gifts, which surprises?

Let us look at the first Christmas in history to discover God’s tastes. That first Christmas in history was full of surprises. It begins with Mary, who was betrothed to Joseph; the Angel arrived and changed her life. From a virgin, she became a mother. She continued with Joseph, who was called upon to be father to a son he had not generated. A son who – in a plot twist – arrives at the least opportune moment, that is, when Mary and Joseph were betrothed and according to the Law could not cohabit. Faced with scandal, common sense invited Joseph to repudiate Mary and save his good name, but he, despite having the right to do this, surprises: so as not to harm Mary, he decides to leave her secretly, at the cost of losing his own reputation. Then another surprise: God, in a dream, changes his plans and asks him to take Mary with him. Jesus was born, and when he had his plans for the family, once again in a dream he is told to get up and go to Egypt. In short, Christmas leads to unexpected changes of life. And if we want to live Christmas, we must open our heart and be willing to receive surprises, that is, an unexpected change of life.

But it is in the night of Christmas that the greatest surprise arrives: the Most High is a little baby. The divine Word is an infant, which literally means “unable to speak.” And the divine word becomes “unable to speak.” The Saviour is welcomed not by the authorities of the time or the place, or ambassadors, no; but by simple shepherds who, surprised by the angels while working at night, rush to Him without delay. Who would have thought? Christmas is celebrating the unexpected of God, or better, celebrating the unexpected God, who overturns our logic and our expectations.

Celebrating Christmas, then, means welcoming on earth the surprises of Heaven. One cannot live solely on the earth when Heaven has brought its newness into the world. Christmas inaugurates a new age, in which life is not planned, but given; in which one lives not for oneself, on the basis of one’s own tastes, but for God, and with God, because from Christmas onwards God is God-with-us, Who lives with us, Who walks with us. Living Christmas means letting oneself be shaken by its surprising newness. Jesus’ Christmas does not offer the reassuring warmth of the hearth, but the divine tremor that shakes history. Christmas is the victory of humility over arrogance, of simplicity over abundance, of silence over hubbub, of prayer over “my time,” of God over my “I.”

Celebrating Christmas is doing as Jesus did, He Who came for us in need, and coming down towards those who need us. It is doing as Mary did: trusting, obedient to God, even without understanding what He will do. Celebrating Christmas as Joseph did: rising to do what God wants, even if it doe not follow our plans. Saint Joseph is surprising: in the Gospel he never speaks, there is not one word from Joseph in the Gospel, and the Lord speaks to him in silence, He speaks to him in his sleep. Christmas means favouring the silent voice of God over the noise of consumerism. If we know how to stay in silence before the Nativity scene, Christmas will be for us too a surprise, not something we have already seen. Staying in silence before the Nativity scene: this is the invitation, for Christmas. Take some time, go in front of the Nativity scene and remain in silence. And you will feel, you will see the surprises.

Unfortunately, though, we can choose the wrong feast, and favour the usual things of the world over the novelties of Heaven. If Christmas remains only a nice traditional feast, where we are at the centre and not Him, it will be a lost opportunity. Please, do not make Christmas worldly! Let us not set aside the one we celebrate, as then, when “He came to that which was His own, but His own did not receive Him” (Jn 1: 11). Since the first Gospel of Advent the Lord has placed us on our guard, asking us not to “be weighed down with carousing… and the anxieties of life” (Lk 21: 34). In these days we are in a rush, perhaps more than throughout the year. But in this way we do the opposite of what Jesus wants. We blame the many things that fill up the days, the world that goes so fast. Yet Jesus did not blame the world: He asked us not to let ourselves be pulled along by it, to keep watch in every moment, praying (cf. v. 36).

Dear brothers and sisters, I wish you a happy Christmas, a Christmas rich in the surprises of Jesus. They may seem to be uncomfortable surprises but they are God’s tastes. If we espouse them, we too we offer ourselves a splendid surprise. Each one of us has, concealed in his heart, the capacity to surprise. Let us allow ourselves to be surprised by Jesus this Christmas.