"He will be helping us from heaven"

An interview published on Radio Vaticano (in Italian) by Alessandro Gissotti with Msgr. Fernando Ocáriz, auxiliary vicar of Opus Dei. 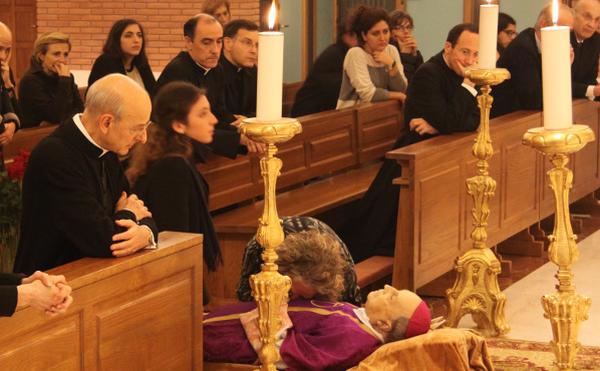 Msgr. Fernando Ocáriz prays before the Prelate's mortal remains in the chapel of the Campus Bio-Medico Hospital.

Fernando Ocáriz. I was able to give him the Anointing of the Sick, and he received it joyfully. He died soon afterwards: serenely, just as his life had always been, a life of service, of self-giving to others. Our hearts are filled with sorrow but also with serenity, because we know he will be helping us from Heaven. As you know, he lived with two saints: with Saint Josemaria, for many years, and then with Blessed Alvaro del Portillo. And he learned from them to be very faithful to the Church, to love the Church, the Pope and souls. I was always impressed by his ability to be attentive to everyone, to listen, to not be in a rush when speaking with this person or that one, even someone who came up to him unexpectedly. He was a good and faithful priest and bishop, close to everyone.

He has been at the head of Opus Dei for over 20 years. What legacy does he leave to Opus Dei and also to the Church?

Fidelity to the spirit received from Saint Josemaria. He was his second successor and always was aware of the need to be faithful to the spirit he had received. This fidelity isn’t a matter of mechanical repetition, because, as the founder himself used to say, the important thing is to preserve the nucleus, the spirit. Ways of speaking and doing change over time, but fidelity to the spirit is preserved. Reflected in him one saw the truth of the imperative that all of us Christians have received to be faithful to the Spirit while always being open to new possibilities.

Bishop Echevarria knew Saint John Paul II, Benedict XVI and Francis quite well. What can you tell us about his relationship with these Popes?

He had a deep affection for the Pope—for all of them!—and a deep sense of fidelity, since the faithfulness that all Catholics should have for Christ and the Church is inseparable from fidelity to the Vicar of Christ, to the supreme Pastor of the Church, the Pope. When he was received by the Pope, he was always deeply moved and joyful.