Granada dedicates a chapel to the new saint

The new chapel features a painting that recalls St. Josemaría Escrivá's first visit to Our Lady of Sorrows, Patroness of Granada. The painting depicts a scene that was repeated frequently after the new saint went to Granada in 1945 to foster the work of Opus Dei there: on his knees, St. Josemaría prays to the Virgin for the fruits of the Christian apostolate in the city. Hundreds of neighbors and authorities attended the blessing in the church, which is entrusted by the diocese to the Prelature of Opus Dei.

Antonio Cañizares, recently named Archbishop of Toledo, said in the ceremony: “With this chapel - surely among the first dedicated to St. Josemaría and to his veneration after the canonization - the diocese of Granada fulfills a duty of gratitude to Opus Dei and its founder, who since 1945 has done and continues to do so much for her. Therefore, my congratulations also to the whole diocese, which will always have here the remembrance of our common vocation to holiness in ordinary life.” For the bishop of Granada, “the life and teachings of the founder of Opus Dei are a gift of God to humanity.” 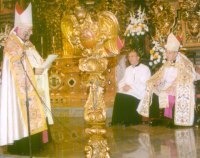 When the benediction and inauguration ceremony for the chapel of St. Josemaría was finished, the participants went to the Granada Cathedral, where around 6,000 people had assembled for a Mass of Thanksgiving for the canonization of the new saint.

Inside the church four large television screens had been installed so that the faithful could follow the ceremony, which was presided over by Bishop Javier Echevarría, and concelebrated by Archbishop Antonio Cañizares; the vicar general of Opus Dei, Msgr. Fernando Ocáriz; the vicar of the Prelature in Spain, Rev. Ramón Herrando; and sixty other priests from the diocese of Granada and the Prelature of Opus Dei.

In his homily, Bishop Javier Echevarría recalled that in 1945 St. Josemaría promoted the establishment of Colegio Mayor Albayzín in a poor quarter of the city. “Since that time, how many graces God has showered upon innumerable people in this area, through the spirit and teachings of St. Josemaría, with the mediation of our mother, the Virgin of Sorrows, still showing today her benevolence!” 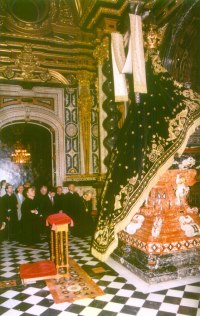 The prelate of Opus Dei invited those present to seek holiness in their profession, in their social relations and in their family, for “God calls us to be saints: yes, holy; not simply good.” It is a matter, ultimately, of serving God and man in “the ordinary things,” avoiding the danger of leading a double life, separating faith from daily life and daily life from faith.

After Bishop Echevarría's homily, the Archbishop of Granada added that all Christians should know that, in difficult times for the Church, “God continues raising up saints who help us realize that it is possible to love God above all the things in the middle of the world.”